The Republic of Trinidad and Tobago consists of the two Caribbean islands of the same name, which belong to the Lesser Antilles and are located off the coast of Venezuela. The main island of Trinidad (4,828 km²) also has a few smaller side islands, around 30 km northeast is the smaller Tobago (300 km²). Both islands were originally connected to the South American mainland.

Trinidad is characterized by three mountain ranges that run through the country in an east-west direction. The highest elevation is the Cerro del Aripo with 940 m in the Northern Range, which is a continuation of the Venezuelan coast cordillera. The Southern and Central Range have heights of up to 300 m. Between the mountain ranges there are plateaus, some of which are muddy. In the southwest of Trinidad is Pitch Lake, which is around 42 hectares and has the largest natural asphalt deposit in the world. The largest rivers on the island are the Ortoire River (50 km long) and the Caroni River (40 km).

The island of Tobago is mostly mountainous, with heights of up to 576 m. In the north there are rugged cliffs, the southwest is flat with wide sandy beaches.

The capital, Port of Spain, is on the west coast of Trinidad.

Trinidad and Tobago has a tropical climate with high temperatures all year round. The average values ​​are around 26 °C. During the day the temperatures rarely rise above 30 °C, at night they do not drop below 20 °C. There is a rainy season between June and October, and the average rainfall is around 2,000 mm. Up to 3,500 mm can also be reached on the mountain slopes facing the wind.

About 40% of the country’s area is forested, including large stocks of tropical rainforest with an extraordinary biodiversity. Almost untouched areas can be found especially in the Northern Range on Trinidad and Tobago. The first nature reserve worldwide was established on Tobago in 1765 (Tobago Forest Reserve). In the drier areas there are wet and dry forests and extensive mangrove swamps along the coast.

The animal world is also rich in species, there are several bat species, howler monkeys, capuchin monkeys, peccaries, deer and agoutis in mammals. The bird life is very diverse, in addition to different herons, flamingos, cranes, wild geese, the scarlet fever, the national bird of Trinidad, lives here. Around 600 species of butterflies were counted. There is a species-rich underwater world in the coral reefs off Tobago.

Around 1.02 million people live in the island state of Trinidad and Tobago. The most densely populated region is the west of Trinidad. The capital of Port of Spain with 52,000 residents is also located here, but around 450,000 people live in the greater region. Other important cities are Chaguanas (73,000 residents), San Juan (55,000) and San Fernando (57,000). The average population density is around 199 residents per square kilometer.

According to COUNTRYAAH, 38% of the population are black (descendants of African slaves), but now the largest group of the population with 40% are Indians. Mixed breeds have a share of about 20%, whites (mostly of British, French or Spanish origin) and Chinese form small minorities. The proportion of black people in Tobago is over 80%. Almost 60% of the population profess Christian faith (25% of the total population are Catholics and about 11% Anglicans). There are also about 20% Hindus and 6% Muslims. Religious freedom prevails.

The official language is English, Hindi, Spanish, Chinese and Creole languages ​​are also used. Healthcare and education are well developed. The average life expectancy is 69 years, the population growth is low 0.4%. School attendance is compulsory for children between the ages of five and twelve, attending schools is free of charge. The literacy rate is almost 99%. 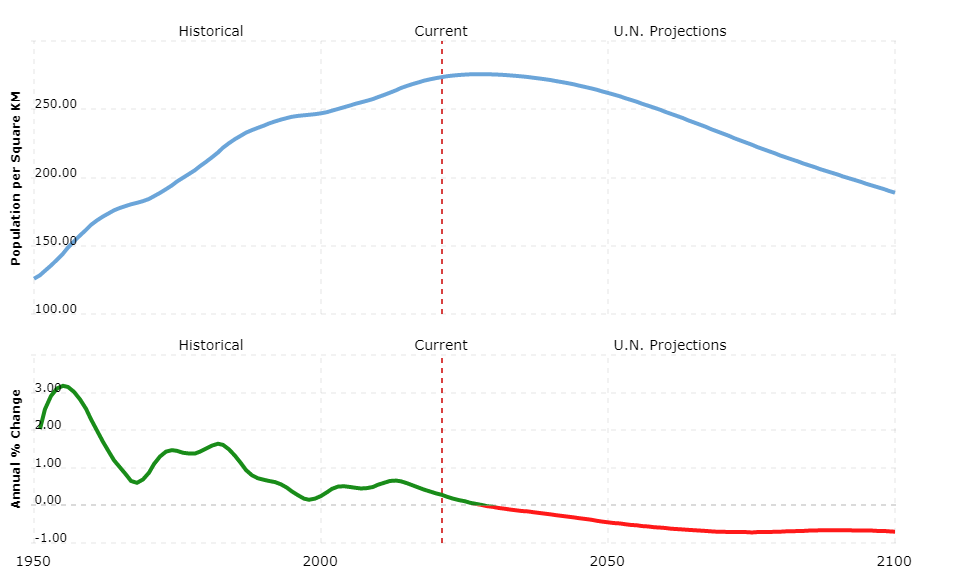 Trinidad and Tobago are, according to the 1976 constitution, a parliamentary democracy within the British Commonwealth of Nations. The head of state is the President (Anthony Carmona since March 2013), who is elected by a body made up of representatives of the two chambers of Parliament. The term of office is five years. The government is headed by the Prime Minister (Kamla Persad-Bissessar since May 2010), who is usually the representative of the strongest political party in Parliament and is appointed by the President.

The legislature lies with the parliament, which consists of two chambers: the 41 members of the House of Representatives are elected by the people for a five-year term, the 31 members of the Senate are appointed by the President in coordination with the Prime Minister and the leader of the opposition. The dominant political parties are People’s National Movement (PNM) and United National Congress UNC).

The island nation is divided into eleven regions, three districts and two cities.

The island nation of Trinidad and Tobago is one of the wealthier Caribbean countries due to its oil and gas reserves. Most of the export earnings come from the sale of oil or products.

Thanks to petroleum, the dominant industrial sector accounts for 55% of gross domestic product (GDP). In addition to iron, steel and petrochemicals, there are food processing companies and textile and building material production, and electrical goods are also manufactured. To ensure that the refineries are fully utilized, crude oil is imported and re-exported after processing.

The share of the service sector in the overall economy is 44%; here trade and increasingly the financial sector play an important role. The most important trading partners of the islands for export (petroleum, chemical products, raw materials) and for imports (machines, vehicles, food and crude oil) are the USA, followed by the countries of CARICOM.

Tourism is an important source of foreign exchange and is being expanded further by the government.

Around half of the approximately 8,300 km of road are paved, although the road conditions are often poor. Left-hand traffic prevails. Airplanes are an important means of transportation between the islands. There is an international airport near the capital Port of Spain and on Tobago.

The currency is the Trinidad and Tobago dollar.