The Tunisian Republic is located in North Africa and borders the Mediterranean Sea in the east and north, Algeria in the west and Libya in the southeast.With an area of ​​163.610 km2, the country is about twice as large as Austria. See Tunisia country abbreviation.

In terms of landscape, Tunisia can be divided into four regions. In the far north, the foothills of the Atlas Mountains cross the country with fertile valleys and plains, here heights of approx. 600 to 1,200 m are reached. The largest river in Tunisia, the Wadi Medjerda, flows through this region from west to east and flows into the Gulf of Tunis (This is also the country’s capital of the same name with around 1.9 million residents in the metropolitan area). South of the river, the so-called Medjerda plain is the most important agricultural area in Tunisia. Further to the south there is a mountain range called Dorsale (French for backbone) with the highest mountain in the country, the Djebel Chambi at around 1,544 m. This separates the predominantly arid southern part of the country from the north. The land descends over steppe landscapes to the so-called bulkheads, a series of salt lakes, some of which are below sea level. In summer they dry out completely, in the rainy season they can briefly transform into a swampy landscape. The largest bulkhead is the bulkhead El Jerid. Further south is the Sahara Desert, which takes up around 40% of the total area of ​​the country.

In the arid south of the country there is steppe vegetation with wild grasses, shrubs and the typical esparto grass. An exception are the oasis gardens, in which a large number of useful plants are cultivated through irrigation canals in a confined space (see economy). The rainfalls, which occur only rarely, can allow the vegetation to bloom for a short time overnight.

Typical Mediterranean vegetation prevails in the northern part of the country. Depending on the height, Aleppo pines and juniper trees, deciduous forests, cork oaks and vineyards are typical.

Lynxes, wild boars and a large number of snake species still live in the forests, including venomous snakes such as the cobra or the horned viper. In the drier regions you can find hyenas, jackals, gazelles, wild goats and typical desert animals such as the gerbils and the fennec. The remaining stocks of wild donkeys are protected by a hunting ban. The bird life includes bearded vultures, ospreys, peregrine falcons and long-eared owls.

Almost all 10.4 million Tunisians are of Arab descent. Only around 2% belong to other ethnic groups, some of them of European descent. Two thirds of the population live in cities, preferably in the coastal regions. The second largest city is Al-Ariana (245,000), followed by Safaqis (230,000 in the urban area). The official language is Arabic, but in addition to the Tunisian Arabic variant Derija, French is also spoken in many places, especially in business and official areas, and the Berber language. The state religion is Islam and the majority of the population are Muslims of the Sunni faith. There are also tiny Jewish and Christian minorities.

Tunisia is one of the most progressive Islamic countries, for example, polygamy (multiple marriages) permitted by Islam is prohibited by law, religious jurisdiction has been abolished and there is a modern law on divorce. Tunisia also proves to be a progressive state when it comes to women’s rights, for example single mothers are no longer uncommon, at least in cities, and women are also found in leading positions in the world of work.

Nevertheless, around 84% of Tunisian men can read and write, but only 64% of women. According to COUNTRYAAH, life expectancy averages 75 years and population growth is 1%. 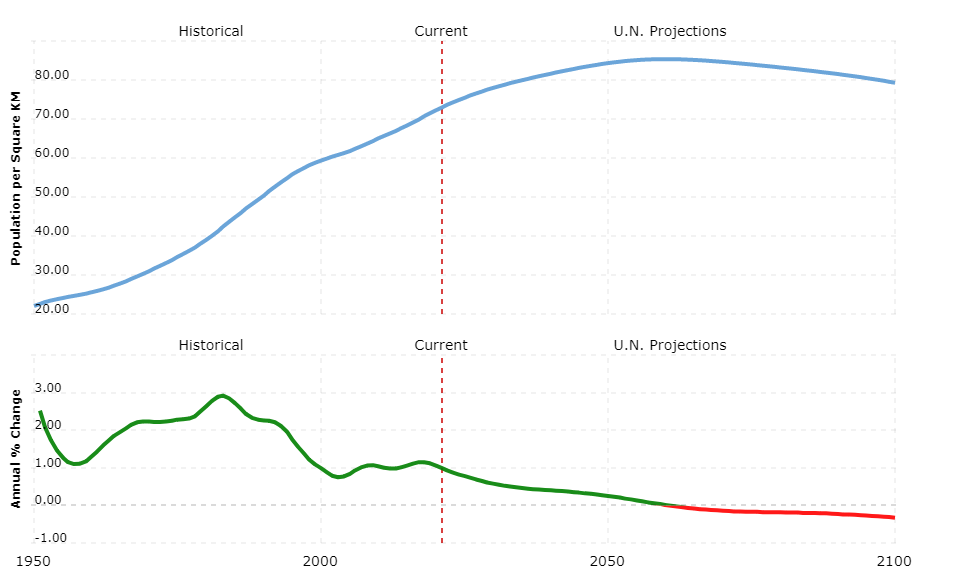 Parliament currently consists of the Constituent Assembly with 217 members. The party system has also been reforming since the upheaval.

Tunisia is divided into 24 governorates, with governors appointed by the government.

Tunisia has achieved a leading position in the region as an emerging country. Since 1986 the country has been relying on the state’s withdrawal from the economy and integration into the global economy. Only 4% of people live below the poverty line and unemployment is 19%.

The formerly most important agricultural sector has lost importance: a fifth of the working population works here, which generates 9% of GDP. In the fertile north, cereals (especially wheat and barley), vegetables, melons, citrus fruits and grapes are grown. Cattle breeding (goats, sheep and camels) and forestry (cork oaks) are also carried out. Date palms are mainly cultivated in the dry south of the country. In the oasis gardens, other crops are also cultivated in the so-called floor extension: date palms tower over the almond, olive and fruit trees, which in turn form a protective roof for soil crops such as vegetables, cereals and forage grasses.

Through the association with the EU, Tunisia wants to rise to the group of industrialized countries (current share of the industrial sector in GDP: 33%). The country is relatively poor in raw materials. Petroleum and phosphates are most important in mineral resources. In addition, zinc, lead, iron ore, natural gas and salt are extracted.

Tunisia is a popular holiday destination for over seven million vacationers annually. The historical sites such as the ruins of Carthage and long sandy beaches provide important foreign exchange income that the Tunisian economy cannot do without.