Republic in southwestern Europe on the Iberian Peninsula on the Atlantic, 92.289 km² (including “adjacent islands” of the Azores and Madeira), 10.6 million almost exclusively Catholic residents, capital Lisbon,official language Portuguese.

Portugal (officially: Rep¨²blica Portuguesa) is the westernmost country on the European continent and occupies around 15% of the Iberian Peninsula with an area of ​​92 289 km². In the east the country borders on Spain (common border 1 215 km), in the west and south on the Atlantic Ocean. The north-south extension of the country is a maximum of 560 km as the crow flies, from the Atlantic to the Spanish border it is around 220 km at its widest point.

The country is divided by the Serra da Estrela, the highest mountain range in Portugal (up to 1.991 m), into a mountainous north and a hilly and flat southern part. The northeastern plateau, which lies between 400 m and 1,000 m above sea level, is a continuation of the Spanish Meseta and is divided by river valleys (eg the Douro) and deep gorges. To the west, the country descends to a broad and fertile coastal plain.

South of the Serra da Estrela is the Tagus Valley, which originates in Spain and near Portugal’s capital Lisbon flows into the sea. With a total of just over 1,000 km, the Tagus is the longest river in the Iberian Peninsula. On both sides of the Tagus is one of the most fertile areas in Portugal, the lowlands of the Ribatejo. The southern interior of Portugal is occupied by the landscape of the Alentejo, which lies below 400 m above sea level. In the southernmost part of the country, the flat-waved hilly country merges into the mountainous landscape of the Algarve, which stretches from the Spanish border to the southwesternmost point of Portugal and all of Europe, the Cabo de Sao Vicente. The capital Lisbon is also the largest city in Portugal with around 565,000 residents (1.89 million in the metropolitan area). Other cities are Porto with around 265,000 residents and Vila Nova de Gaia (approx. 250,000 residents).

The archipelago of the Azores,which lies around 1,600 km to the west in the Atlantic, and the island of Madeira, north of the Canary Islands, also belong to Portugal, they are autonomous regions.

Portugal’s climate is very different due to the country’s north-south expansion. Atlantic influences are dominant in the north of the country and continental inland. The southern climate is more Mediterranean. The amount of precipitation decreases from north to south: in Porto an average of 1 150 mm is measured, in Faro in the Algarve around 465 mm. The highest rainfall is in the northwestern highlands (up to 3,000 mm annually). Snow falls in the mountains in winter. In the Alentejo in the southern interior, the winters are sometimes very cold, while the summers are often hot and dry. The Algarve, which is shielded by a mountain range to the north, has short and mild winters.The average temperatures in January in Faro are around 12 °C (July 24 °C), in Porto in northern Portugal approx.

The climate of the Azores is characterized by constant, strong winds and a lot of rainfall. The so-called “Azores high”, which largely determines the weather of the European continent, is formed in summer as a high-pressure zone. In Madeira, the climate on the north side of the island causes frequent rainfall, while the south side is drier and warmer.

The flora in Portugal is just as diverse as the climate. Pine, beech and oak trees grow in the humid areas in the north (in total around 30% of the country is forested, mainly the north). In the drier interior, chestnuts and birches are added. The eucalyptus tree imported from Australia can be found throughout Portugal. Towards the south, the stock of olive trees, pine trees, cork and holm oaks increases, there are also carob trees, fig and almond trees. In the Algarve with its particularly mild climate, citrus fruits, peach trees, oleanders, bougainvillea and hibiscus grow. In the higher mountain areas of the Serra da Estrela there is alpine vegetation with moss and lichen.

Of the evergreen laurel forests that used to cover the Azores, only a small remnant remains. They had to give way to the agricultural land. Original laurel forests can still be found in Madeira, especially on the partially inaccessible north side. The south side of the island also offers a rich flora.

As in many other European countries, the population of wild animals is declining. But animal species such as wolves or lynx still find habitats in the sparsely populated interior. In the forests in the north, especially in the Peneda-Ger¨ºs National Park, deer, wild boar and foxes are said to also have some wild horses. Ibex and eagles can be found in the mountains. The bird life is particularly diverse; carp and pike live in the rivers in addition to trout.

Portugal has around 10.57 million residents. The majority of them live in the greater Lisbon area or in or in the catchment area of ​​Porto, the second largest city in the country and an important economic center. In contrast, parts of the interior are sparsely populated.

According to COUNTRYAAH, 98% of the population are Portuguese, almost all of whom belong to the Roman Catholic Church. There are few Protestant, Jewish or Islamic communities. The few foreigners in the country mainly come from the former Portuguese colonies in Africa or from Brazil and mostly live in the larger cities. In contrast, many Portuguese live in other countries: several waves of emigration in the 20th century meant that around 4.5 million Portuguese now live abroad, especially in Brazil.

The official language is Portuguese; the literacy rate is just under 94% (this is a very low figure in a European comparison). In 1970, around 30% of the population were illiterate. After the 1974 revolution, education became more important. There is still an educational gap between urban and rural areas, and there is still a shortage of schools here. The average life expectancy is 77.5 years. Population growth has slowed in recent years and is now only 0.4%. 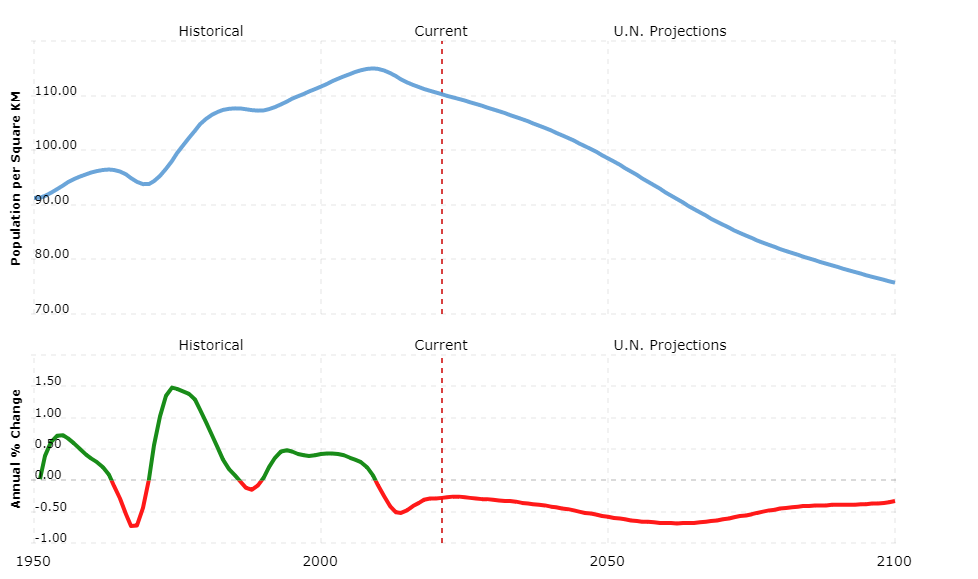 Portugal is a parliamentary democracy. The current constitution dates from 1976. The head of state is the President (Anibal Cavaco Silva since March 2006). He is the commander-in-chief of the armed forces and is directly elected by the people for five years (one-time re-election possible). The head of government is the Prime Minister (since June 2011 Pedro Passos Coelho). He has the right to propose the ministers, who are then appointed by the president.

The Portuguese Parliament (Assambleia da Republica) has 230 seats, the members are elected for four years. The most important parties are the Socialists (PS) and the Social Democrats (PSD). Citizens from the age of 18 are eligible to vote. There is also a State Council with an advisory role for the President.

The Portuguese mainland is divided into 18 districts (Distritos), these in turn into districts (Concelhos). Madeira and the Azores are autonomous regions that have had limited political and economic sovereignty since 1976.

Portugal as a business location has come under pressure in the past ten years due to increasing globalization and increasing international competition. The deficient school and education system, the high level of new debt and the strong regional differences continue to be problematic for development: coastal areas are much more involved in the growth process than inland areas, which is also reflected in the expansion of the infrastructure.

Agricultural yields (around 10% of the workforce are employed here) only cover the population’s own needs in a few areas (eg wine, olives and dairy products); productivity is low due to poor soil, small holdings and little mechanization. Corn, olives, potatoes, cereals, vegetables, especially citrus fruits, peaches and almonds are grown in the south. Port wine and cork from cork oaks play a special role in exports (Portugal is one of the world’s largest cork producers). The extremely rapidly growing eucalyptus trees imported from Australia provide the raw material for the cellulose industry and are cultivated accordingly. Fish-rich fishing grounds lie off Portugal’s 830 km long coast. Sardines, especially for export, are fished here in the traditional way.

The industrial sector, which had been neglected until the country was democratized, now generates almost a quarter of its gross domestic product. The main centers are in Porto and Lisbon. The textile and leather goods industry, paper and chemical industry, steel mills and the electrical and electronics industry play a role. Mineral resources include copper, tin ore, titanium, hard coal, tungsten and gold.

The main trading partners are the other EU countries, especially Spain, Germany and France. Tourism plays an important role for the economy, about half of all tourists travel to the Algarve.