Qatar (English Qatar, officially Arabic Daulat al-Qatar) forms a peninsula that extends into the Persian Gulf. The only neighbor of the Middle Eastern monarchy is Saudi Arabia in the south, with which there is a 60 km border, provisionally established in 1965 and 1992. See Qatar country abbreviation.

The land area of ​​Qatar forms a flat limestone plain, which is only broken by a few hills on the west coast. The country’s highest elevation is the Tuwayyir al Hamir, 103 meters high. In the south, the limestone plain descends into a series of salt pans, swamp areas that are called Sebchas in the Arabic-speaking region. There is a small group of islands in the Gulf of Bahrain, the Rawar Islands, with Bahrain Border disputes. With a land area of ​​11,437 km², Qatar is slightly larger than Corsica. The emirate is approximately 180 km from north to south. The country’s groundwater is saline, so drinking water is extracted from two seawater desalination plants on the coast. There are no permanent rivers and only a few oases that are located on the flat limestone plain.

The capital of Qatar is Doha.

Qatar has a dry and hot desert and semi-desert climate. The average temperature in Doha in January is 21 °C. In July they rise to an average of 40 °C. The annual rainfall in the capital is 130 mm, in other regions it is sometimes considerably lower. The sparse rains fall in the winter months. Due to the proximity to the sea, the humidity is relatively high. Nevertheless, sand and dust storms occur regularly.

The flora of the country is very scarce due to the dry and hot climatic conditions and only limited to a few more fertile regions. Only a few plants thrive on the desert and semi-desert soils, some of which are covered with gravel, some with sand. Vegetation can only be found in the north of the country, where the few irrigated areas are. An exception are the few dry valleys (wadis), in which desert plants thrive and blossom for a short time during the spring rain.

The country’s fauna is also very limited. Nevertheless, some desert animals have adapted to the dry and hot living conditions in this inhospitable region. These are, on the one hand, types of mice and spiders, on the other hand geckos and the scorpions native to the deserts.

A special organism are the coral reefs in the coastal waters off the peninsula, which are among the largest living organisms on earth.

The emirate has a total population of 863,000. The population is very heterogeneous: while 40% of the Qatari are of Arab descent, 18% have Pakistani and just as many Indian roots. Another large minority are Iranians with around a tenth of the total population. The official language is Arabic, but English is very common as a second language. The state religion is Sunni Islam, to which almost 93% of the population belong; about 6% are Christians.

The Qatari school system is British; there is compulsory schooling for both boys and girls. According to COUNTRYAAH, over 82% of the population can read and write; among other things, the state endeavors to train its population by granting study grants to foreign universities. The average life expectancy is almost 74 years, the population growth is 3.1%, also due to the high immigration rate. 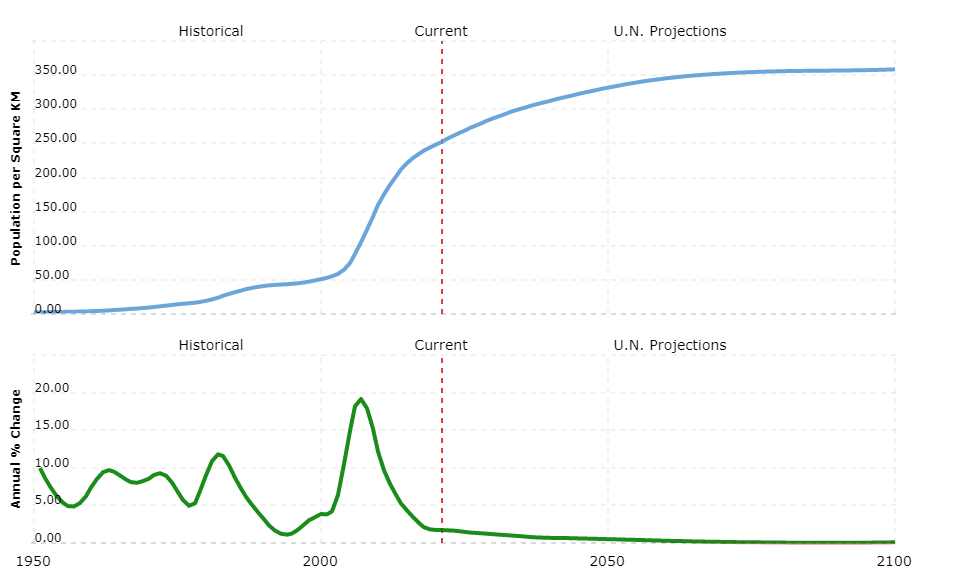 Qatar is a constitutional monarchy under the 2005 constitution. The Emir is the head of government, head of state and supreme holder of the executive and legislative branch (Sheikh Tamim bin Hamad Al Thani, since June 2013).

The advisory assembly (Madschis al-Shura) consists of 35 members appointed by the Emir. In the future, a parliament is to be set up, of which only 45 are appointed from the 45 deputies, the remaining 30 are elected by the people for four years. Active and passive voting rights should then also exist for women. There are no parties or unions. However, the constitution guarantees the population rights such as freedom of speech and assembly, equality before the law and freedom of religion.

The legal system is based on the Emir’s legal ruling. At the same time, there is a set code of rules; Islamic law applies to civil law.

The centrally administered state is divided into seven municipalities (baladiyya).

Qatar is one of the richest countries in the world. The country’s most important and only significant export goods are oil and natural gas. They contribute 58% to the gross domestic product (GDP). Only 0.5% of the population are considered unemployed.

Due to the drought and poor soil, agriculture can only contribute 0.1% of GDP; These are mainly generated by growing fruit and vegetables, and there are also dairy and meat cattle and poultry farming. Fishing is practiced in the Persian Gulf.

In addition to the rich oil reserves – the deposits will probably last until 2060 – the country is in possession of the world’s third largest gas fields. The country’s largest heavy industry complex with oil refinery, natural gas processing, a steel mill, shipyard, cement and fertilizer production is located in Umm Said, which has extensive port facilities. The Emir is endeavoring to diversify the economy in the longer term and to promote the development of non-petroleum related industries. In addition, there is an intensive search for new offshore oil fields.

One of the main problems in the country is the lack of fresh water supplies. Large industrial plants therefore desalinate sea water and make it usable. Food has to be imported almost completely (from France, Great Britain, Germany and Japan). The largest buyer of Qatari products is Japan with 28%, followed by South Korea and India.

The international airport is located in the capital, Doha.

The currency is the Qatari rial.