The independent state of Papua New Guinea comprises the eastern part of the island of New Guinea, which is located in the South Pacific and is separated from the northern tip of Australia by the approximately 180 km wide Torres Strait. The country also has around 600 islands, including the Bismarck and Louisiade Archipelago, the Trobriand and D’Entrecasteaux Islands and the Bougainville and Buka Islands, which belong to the Solomon Islands. The west of the island of New Guinea is part of Indonesia as the province of Irian Jaya. With an area of ​​462,840 km², Papua New Guinea is about the size of Sweden.

The island of New Guinea is crossed by mountain ranges in a length of around 2,500 km in a west-east direction. On the national territory of Papua New Guinea are the Bismarck Range after the Central Range and the Owen Stanley Range in the East. The highest elevation in Papua New Guinea is Mount Wilhelm at 4,694 m. The mountains are crossed by broad highland plains. In the south and north the mountains drop steeply to swampy lowlands. In the south, the alluvial plain of the Fly river is up to 450 km wide. Other rivers in the south of the mountains are the Kikori and the Purari. The capital, Port Moresby, is on the south coast of the island.

The islands, which are part of the state territory of Papua New Guinea, are partly high volcanic islands, partly flat coral atolls, which only protrude a few meters above sea level.

Papua New Guinea has a tropical climate. The average temperatures in the capital Port Moresby on the south coast of the island are around 28 °C in January, in the highlands and mountains the temperatures are correspondingly lower (between 15 °C and 20 °C). The annual rainfall varies depending on the region and altitude. While up to 6,000 mm can fall in the mountains (above 4,000 m also as snow), it is sometimes only 1,000 mm in lower and wind-facing locations. Much of the precipitation falls from November to April (northwest monsoon), and it is drier between May and October (southeast trade wind).

Almost 70% of the state of Papua New Guinea is forested. In the lowlands there is tropical rainforest with its great biodiversity, which merges into mountain and cloud forest at higher altitudes. Mangroves grow in the coastal marshes, and coconut palms predominantly on the sandy coastal sections. Eucalyptus and acacia trees thrive in the drier regions.

The fauna in Papua New Guinea shows predominantly Australian, partly also Asian influences. Marsupials such as tree kangaroos, marshals and various climbing and gliding bags live here. Rats and bats occur in mammals, for example. The rainforest offers a suitable habitat for a large number of bird species. The heraldic animal of Papua New Guinea is the bird of paradise, furthermore there are, for example, the flightless helmet cassowary, parrots, hornbills and giant butterflies. Numerous species of fish and sea turtles live in the waters off the coast.

Around 5.55 million people live on the territory of Papua New Guinea. The most densely populated areas are the mountain plateaus, the regions around the Gulf of Papua (in the south of the country) and the northern islands. The average population density is very low at twelve residents per square kilometer. By far the largest city is Port Moresby with around 360,000 residents.

Tribalness plays an important role. The dissolution of traditional structures and the overpopulation of individual tribal areas lead to migration from the interior to urban areas. Nevertheless, the degree of urbanization is only low at just under 20%. In the more inaccessible areas of Papua New Guinea, tribes still live at the Stone Age cultural level.

Social and health services are in the process of being developed, but often only work in urban areas. The average life expectancy is 65 years, the population growth is estimated at 2.25%. According to COUNTRYAAH, two thirds of the population can read and write. 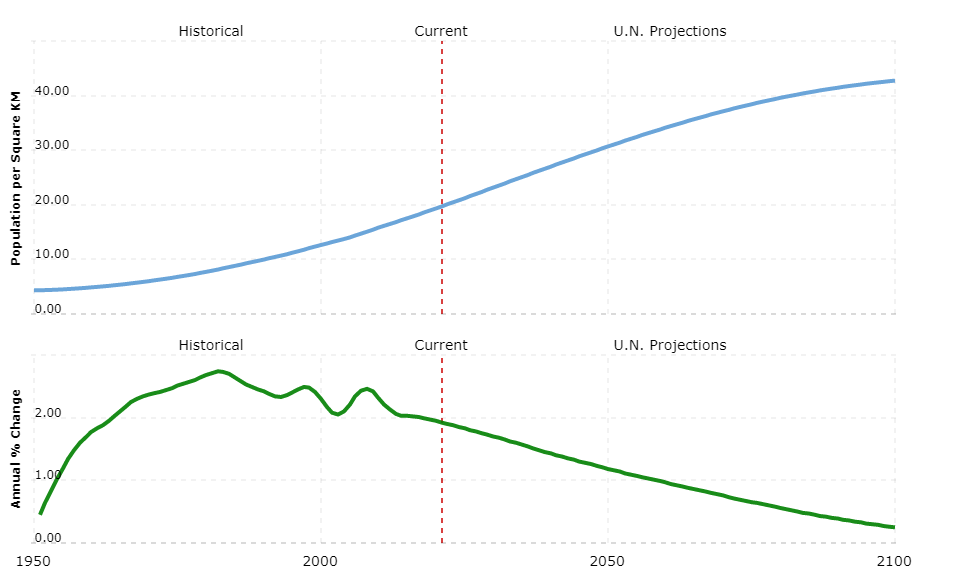 The Independent State of Papua New Guinea is a parliamentary monarchy under the British Commonwealth of Nations with a 1975 constitution). The government is headed by the Prime Minister (since August 2011 Peter O’Neill), who is appointed by Parliament and is responsible for it together with the Executive Council he heads.

The legislature lies with the parliament, which consists of a chamber with 111 seats. The people are elected by the people for a term of five years. Voting rights from the age of 19.

Papua New Guinea is divided into 20 provinces, a capital district and a province with special status (Bougainville Autonomous Region).

Papua New Guinea is an agrarian country despite valuable natural resources (especially oil and gas as well as gold and copper). 85% of the population are employed in agriculture, mostly in the form of a pure subsistence economy. Only the soils in the lowland areas and on some of the islands are suitable for arable farming. Coffee, cocoa, tea and rubber are cultivated in small businesses and plantation management. Mostly in subsistence farming, taro, jams, bananas and sweet potatoes are grown. The export of fine woods plays an important role. The logging is now limited.

The industry focuses on the processing of agricultural products (sugar, palm oil, fish processing) and the extracted raw materials (eg petroleum refineries). It contributes 39% to the gross domestic product (GDP). Mining is becoming increasingly important, and companies are often foreign-owned. The service sector contributes a third to (GDP). Tourism only plays a subordinate role for the country’s economy.

The infrastructure is poorly developed. The vast majority of the available roads (around 20,000 km in total) are not paved. There is an international airport near the capital, Port Moresby.

The currency is the Kina.