Oral literature is still alive, especially through the griots ‘ epic songs and chants (itinerant minstrels, who pass on the historical memory of the country). The fulbe are distinguished by their original poetry, despite the Arab influence; the authors show a marked personality and create celebratory or moralizing, religious or ritual poems with archaic structures. Many works are written in Arabic letters: the oldest manuscripts date back to the century. XVIII. The first Guinean writer was perhaps Juan Latino, a slave who lived in Spain in the century. XVI and author of works in Latin, including a poem on the battle of Lepanto. French colonization exerted a Westernizing influence on the elites and channeled their interests towards ethnological research. Before independence, French literary production was dominated by an internationally renowned novelist, Camara Laye (1928-1980), and by the playwright Keita Fodeba (1921-1969), founder of the famous Guinean ballets and the Théâtre Africain. Among the narrators were Émile Cissé (1930-1974) and Prince Modupe (b. 1932).

After independence, the literary scene was upset by Sékou Touré (1922-1984), who soon became a ferocious tyrant, who persecuted intellectuals and imposed cultural autarchy. A prolific author, at the time of his death his bibliography amounted to more than thirty volumes, perhaps the collective work of a group of anonymous authors. A fundamental theme of his Marxist-inspired speeches and essays is the definition of the culture and role of the political leader. From the initial logical rigor, his writings then reveal the signs of a paranoid delusion. Under his rule, literature becomes militant, political: from poetry, represented by Camara Sikhé, Condetto Néné-Khali Camara, Saidou Conte and Traoré Mamadou, at the theater, mostly historical, which after the death of È. Cissé is reduced to folkloric representations. But the best representatives of literature are forced into exile in order not to submit to the ideological impositions of the single party. In addition to the already well-known Camara Laye and D. Tamsir Niane, who deals with historical research, three internationally renowned novelists are revealed: Alioune Fantouré, who deals with the theme of the struggle between an oppressive tradition and an alienating modernism; Williams Sassine, with novels of great dramatic tension that address the conflicts in Africa; Tierno Monenembo, winner of the Black African Literary Grand Prix in 1986. All three express anger, pain and deep frustration for the social and political situation of the Contemporary Africa. Poets are scarce, including A. Tylé Sara, AT Cissé, S. Adama, M. Gaye. On the other hand, there are numerous essayists, especially politicians, who lead violent opposition to the regime from exile. With the fall of Sékou Touré, literature struggles to take off. However, there are good promises, such as CO Kanté, Ansoumane Doré, Nadine Bari, Mamadou Cissé, K. Diarre, and the writer Kesso Barry. We also point out, for their dramatic authenticity, the testimonies of Alpha A. Diallo, Ardo O. Bâ and Amadou Oury Diallo, who described the atrocities of political concentration camps. Even the poet of pain and hope, Camara Kaba “41”, after ten years of imprisonment, sings the newfound freedom in delirious verses. The rest of the opera production is less relevant, while the theater, free from any repressive ideology,

According to cancermatters, the most noteworthy ethnic groups of Guinea from an artistic point of view are different; the baga have an artistic style in which typically Sudanese elements are found mixed with others of Guinean influence; the most representative form of expression is constituted by the masks used in dances and once closely connected to secret societies (the powerful Simo society used in its rituals special masks such as the bands and the monumental nimbas). The artistic production of the nalu and landumans can be considered as part of that of the neighboring baga, as these groups have many cultural elements in common. The Toma group, which lives in the border areas between Guinea, Liberia and Sierra Leone, on the other hand, deserves a special mention, as it constitutes an outpost of the Sudanese style; evidence of this are the evocative land masks , which reproduce anthropomorphic elements combined with zoomorphic features and personify the powerful spirit of the forests of the secret society Poro. Contrasted female mask heath is the mask nyangbay, which represents a wildcat and is dressed in a fur costume and adorned with metal strips. 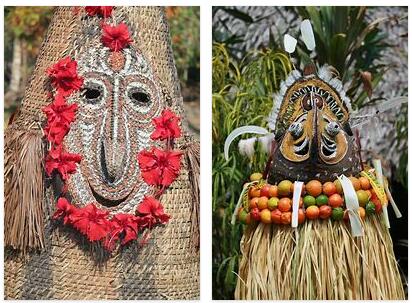