Morocco (officially: al-Mamlaka al-Magribiyya) is located in north-west Africa and is one of the so-called Maghreb countries together with Tunisia and Algeria. With an area of ​​458.730 km², the country is about a quarter of the size of Germany. In the north, Morocco is separated from the European continent by the Strait of Gibraltar, in the northeast and east it borders on Algeria. In the south is the area of ​​the Democratic Arab Republic of Sahara occupied by Morocco since 1979 (UN designation: Western Sahara). See Morocco country abbreviation.

The Moroccan landscape is mainly characterized by the mountain ranges of the Atlas, which also take up the largest part of the country. The highlands of the Er Rif (Rifatlas) run along the Mediterranean coast in northern Morocco, which is predominantly steep and rocky, reaching heights of up to 2,456 m. Parallel to the Atlantic coast in the west of the country, the chains of the Middle, the High and the Anti-Atlas (seen from north to south) extend from the southwest to the northeast. In the High Atlas, at 4,165 m, is the country’s highest mountain, the Toubkal, which is also the highest mountain in North Africa. The area rises from the Atlantic coast to the central part of the Moroccan Meseta, a vast, weakly undulating plateau with individual island mountains, which is around 450 m above sea level. The Meseta is bounded in the south and east by the High and Middle Atlas. While there are fertile plains in the northern part of the country with rivers that carry water all year round (Moulouya, Sebou), the landscape south of the Atlas chains slowly changes into the plains of the Sahara. There is a multitude of oases here.

While the climate in the northwest of Morocco is predominantly Mediterranean, continental influences dominate the inland and the southern part of the country, and the desert climate in the far south. The High and Middle Atlas form the climate divide. The Mediterranean climate brings dry, hot summers and mild, rainy winters. The average temperatures in Rabat on the Atlantic coast are given as around 12.5 °C in January and 23 °C in July. Inland, the continental climate influences predominate, in Marrakech summer temperatures of up to 45 °C are sometimes reached, the average is around 29 °C. In the winter months, temperatures in the higher regions drop to freezing point.The precipitation decreases towards the south: around 500 mm are measured annually in Rabat, in Marrakech around 240 mm inland, in Agadir around 200 mm. In the summer months, a hot, dry wind (sirocco) occasionally blows from the Sahara.

The vegetation in Morocco is similar to the climate. In the north it is Mediterranean, in addition to shrubs such as juniper and alfagras, there are residual oak, cork oak, cedar and fir forests in the plains and the rainier regions of the mountains. In the places where the original vegetation was replaced by centuries of deforestation, mainly maquis and dwarf palms grow. Ironwood trees and jujubes grow in the area of ​​the southern Atlantic coast. The desert areas of the Sahara in the south of the country are practically without vegetation.

Due to the narrowing of their natural habitat, animal species such as the serval, leopard and desert lynx are threatened with extinction. The fennec (desert fox), hyenas, jackals and gazelles are still relatively common. Various types of lizards, chameleons and snakes are found on reptiles. The bird life is also rich in species (eg dwarf eagles, vultures, kites, storks).

Morocco has about 30 million residents. The population growth is given as 1.6%. According to COUNTRYAAH, 60% of the population are Arabic (Maghreb) speaking Moroccans, about 30-40% belong to the Berbers. The name Berber originally comes from “barbarians” (Latin barbarus) and was given to the peoples who did not belong to the Roman or Greek civilization by the Romans. The term was later limited to the peoples of northwestern Africa. The Berbers are not a unified people, rather they are several different ethnic groups that speak just as many different dialects. In Morocco, members of the Berber people mainly live in the mountain ranges of the Rif and the High Atlas or in the oases south of the mountains. Foreigners who come mainly from Algeria, Tunisia and France, represent only a small minority. A large part of the population of Morocco concentrates on the coastal areas in the north and northwest and on the fertile plains of the country. Almost half of them live in cities. The official language is Arabic, various Berber languages ​​are also spoken, French is still important as a commercial and educational language.

The state religion is Islam; Accordingly, 99% of the population are Muslim, 90% of whom are Sunnis. Although school attendance is compulsory for children, the literacy rate of the Moroccan population is only around 52%, whereas it is significantly lower for women. The average life expectancy is around 71 years. 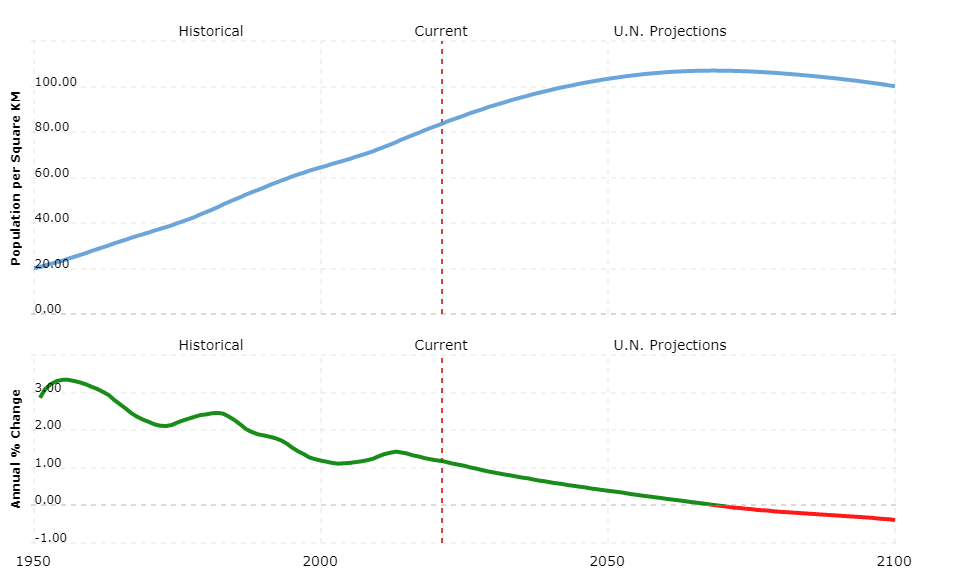 In 2011, the population voted by a large majority for a constitutional reform that would give parliament and the judiciary more rights.

Morocco is a constitutional monarchy. The monarch (Mohammed VI since July 1999) is the head of state, spiritual leader and commander-in-chief of the armed forces. His far-reaching powers include the appointment of the Prime Minister (since November 2011 Abdelilah Benkirane) and cabinet members, the dissolution of Parliament and the imposition of a state of emergency.

The legislature lies with the two-chamber parliament, which consists of the Senate with 270 seats and the House of Representatives with 395 seats. While the House of Representatives are elected directly by the people for five years (30 of them via a national list of women), Senate members are elected for nine years by representatives of the municipalities and professional organizations. Since 2003, all Moroccans aged 18 and over have had the right to vote. All laws passed by parliament must be confirmed by the king.

Morocco is administratively divided into 16 regions.

Around one in seven Moroccans lives below the poverty line. The high level of foreign debt and the dependence of agriculture on annual precipitation make economic development difficult.

Around 40% of the workforce is employed in the agricultural sector; they generate about a seventh of the gross domestic product. In addition to cattle breeding, the cultivation of cereals (wheat, millet, barley, rice), vegetables, olives, citrus fruits and date palms plays a role. In forestry (around 12% of the country is forested), in addition to cork production, the recycling of alfa grasses is important. Fishing provides good yields thanks to the rich fishing grounds in the Atlantic (mackerel, tuna, sardines and shellfish).

An important economic factor in Morocco is mineral resources: Morocco is the world’s largest exporter of phosphate. A large part of the phosphate deposits are in the areas of the Western Sahara annexed by Morocco. Coal, various ores, manganese, lead, barite and petroleum are also mined.

Although the industry was heavily promoted in the 1970s with financial assistance from the United States and some European countries, it is still only moderately developed. Around a fifth of the workforce is employed in this sector, which is dominated by food processing companies. Other industrial products are metal products and plastics, building materials, textiles and chemical products.

The main buyers of Moroccan products are France and Spain; Imports also come from these countries (especially energy, semi-finished goods, equipment and consumer goods). An important source of foreign currency is the transfers from Moroccans living abroad. The income from tourism increases annually.

The currency is the Moroccan dirham (= 100 centimes).