Mozambique (officially: Rep¨²blica de Moçambique) is located in southeast Africa. The east of the republic borders the Indian Ocean. In the north, Tanzania, in the north-west Zambia and Malawi, to the west of Zimbabwe, in the southwest of the Republic of South Africa and southern Swaziland. With an area of ​​801 551 km², the country is more than twice the size of Germany.

The national nature can be divided into two large landscapes: A coastal strip between 200 and 400 km wide extends as a lowland along the 2,795 km long coastline on the Indian Ocean. Both steep and flat coasts characterize the bank area north of the Zambezi, to the south there are compensation coasts with lagoons, dunes and bays. In the north and west, the lowlands rise to highlands, which in turn have island mountains. The highest of these, Monte Binga, is on the border with Zimbabwe. At 2,436 m, it is the highest peak in the country.

Mozambique has numerous rivers. In the far north, the 1,100 km long Rovuma forms the border river with Tanzania, the central region is dominated by the Zambezi, the largest river in southern Africa with 2,660 km. This arises on the Lunda wave in Zambia and flows into the sea at Chinde in Mozambique with a 20,000 km² delta. An economically significant river is the continuously navigable Maputo in the far south of the country, which flows into the Indian Ocean near the capital of the same name on the Delagoa-Bai.

The greater northern part of the country is under the influence of the alternating humid tropics, while the south is marginal tropical. This leads to a monsoon climate in the north, which has southwest winds from May to August and north-east winds from October to March. The annual precipitation (up to 1,200 mm on average) usually falls in this region from December to March. In the south, however, there is a constant southeast wind. April to September are cooler and dry, October to March hot. During this time, most precipitation falls, which averages up to 1,000 mm per year. The middle of the country between the regions described above represents a transition zone that shows a mixture of both climates. The average temperatures in Beira below the Zambezi estuary are 28 °C in January and 21 °C in July; in the port city Maputo in the far south are three degrees lower in January and July.

In the south of the country, the natural vegetation consists mainly of dry savannah and bush vegetation. This merges into an open forest to the north, which defines most of the north and the east-central regions. In the interior of the northern part and on the Chimoio plateau, however, there are dense forest landscapes. The immediate river regions have gallery forests, and mangrove forests can be found on the coast.

Palm forests stood in the Gorongosa National Park at the level of the Zambezi Delta in the interior. There are also free-living gazelles, lions and warthogs. The extensive wild animal populations also include water buffalos, elephants, baboons, giraffes, zebras and antelopes. In addition, numerous ungulates and wild cats such as leopards and lions live in the country. Crocodiles and hippos as well as various snake species such as pythons, cobras and vipers are found near river regions. Cranes, storks, pelicans, herons, ibises and flamingos live all over the country, but vultures, crows and buzzards are also among the many species of birds found in the country.A number of large-scale reserves offer protected habitats to the country’s wild animals, particularly in Central and South Mozambique.

Mozambique has approximately 19.4 million residents. The largest city in the country is the capital Maputo (until 1975 Lourenço Marques) with around one million people in the metropolitan area; however, the number of residents can hardly be recorded statistically due to the countless unregistered poor settlements. According to COUNTRYAAH, 47% of the Mozambique population belong to the Makua ethnic group, 23% are Tsonga, 12% Malawi and 11% Shona. A total of over 70 ethnic groups live in the country, the vast majority of whom belong to the Bantu peoples. Of the Europeans who once lived in Mozambique, only a few stayed in the country after the 1974 revolution, but Mozambique is currently home to well over a million refugees from neighboring countries.

Just under half of the population belongs to natural religions, about 37% are Christian and 18% Muslim, with the Muslim population group concentrated in the coastal regions in the north. The official language is officially Portuguese, although only a quarter of the population speaks it as a second language. The vast majority of Mozambicans communicate in Bantu languages. Among these, Makua-Lomwe, Tsonga and Shona are the most common. European and Asian languages ​​are mainly spoken in the port cities of Maputo, Beira, Quelimane, Nacala and Pemba.

Despite high birth rates, the population of the African state grows by “only” 1.5% a year, since the infant mortality rate is very high at 13% and moreover 12% of the population is infected with the HIV virus. In addition, hepatitis, malaria and smallpox are common. Life expectancy is only 40 years. About half of the Mozambicans can read and write. 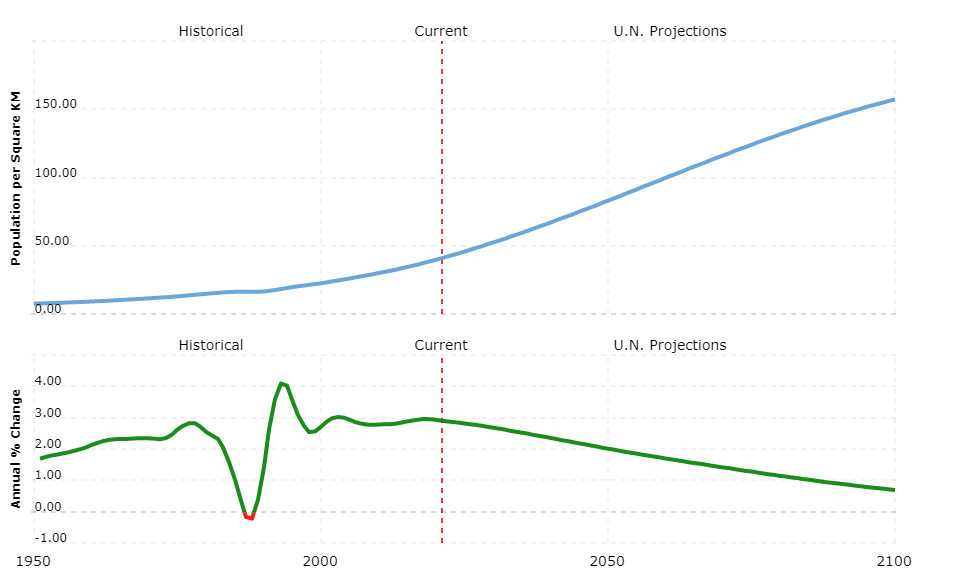 Mozambique has been a presidential republic with a multi-party system since 1990; the current constitution dates from 2004. The president (since February 2005 Armando Emilio Guebuza) is elected in direct election for five years, a one-time re-election is possible. He heads the armed forces as commander-in-chief and appoints a government chaired by a prime minister (Alberto Vaquina since October 2012). In addition, he has very extensive executive powers.

The legislative body is the Assembly of the Republic, which consists of 250 deputies who are directly elected for five years.

Mozambique is divided into eleven provinces, one of which is the city of Maputo, which also has provincial status.

Mozambique is one of the poorest countries in the world: 60% of the population live below the poverty line. The country’s economy is experiencing unabated growth, but so far only the social elite and foreign investors have benefited from it.

Agriculture and fisheries generate almost a third of the country’s gross domestic product (GDP). Almost two thirds of the population operate subsistence farming. Livestock farming is hardly possible, especially in the north due to the spread of the tsetse fly.

The existing mineral resources such as gold, copper, iron ore and precious stones are hardly used due to the poor infrastructure. In 2011, huge natural gas fields were discovered off the coast. The scenic beauty represents a tourist potential that has also not yet been developed.

The country’s main ports are Maputo, Beira and Nacala. International airports can also be found in Maputo and Beira as well as in Nampula. The rest of the infrastructure is little developed; of the 30,000 kilometers of road, only 6,000 are paved.