The Republic of Montenegro, which together with Serbia formed the Confederation of Serbia and Montenegro until 2006,is located in southeastern Europe on the Balkan Peninsula and borders on Serbia, Bosnia-Herzegovina, Croatia and Albania. The Adriatic Sea forms a natural border in the southwest of the country. With an area of ​​13.812 km², Montenegro is one of the small countries in Europe.

Montenegro is a mountainous country in the southeastern Dinarides. In the south and west are the karstified coastal mountains that border the Adriatic. The north and east of the country are at high mountain levels. Bobotov Kuk is located in the Durmitor high massif and is the highest mountain in Montenegro at a height of 2 522 m. The Montenegrin coast stretches for 260 km along the Adriatic Sea. The longest river is the Tara with a length of 150 km. In the border area with Albania lies one of the largest inland lakes in the Balkans, Lake Skadar (391 km²).

There are three climatic zones in Montenegro. The narrow coastline is fully Mediterranean with dry summers (average temperature in July: 24.5ºC) and mild, short winters. In the mountains that border the coast and extend up to 50 km inland, there is a sub-Mediterranean climate with warmer summers and colder winters. Most of Montenegro is in the temperate zone with an average of 25ºC in July and long winters.

Montenegro has the highest rainfall in Europe. The rainiest place is Crkvice in the Orjen with 5 000 mm.

According to COUNTRYAAH, 600,000 people live in Montenegro; 43% of them are Montenegrins. Almost a third of the population is made up of ethnic serbs. Minorities form Bosniaks (13%), Albanians (7%) and numerous other ethnic groups, including Roma and Sinti (0.4% of the total population). Population growth is slightly negative.

With around 140,000 residents, the capital Podgorica is the largest city in the sparsely populated country, with an average of 47 residents per km². 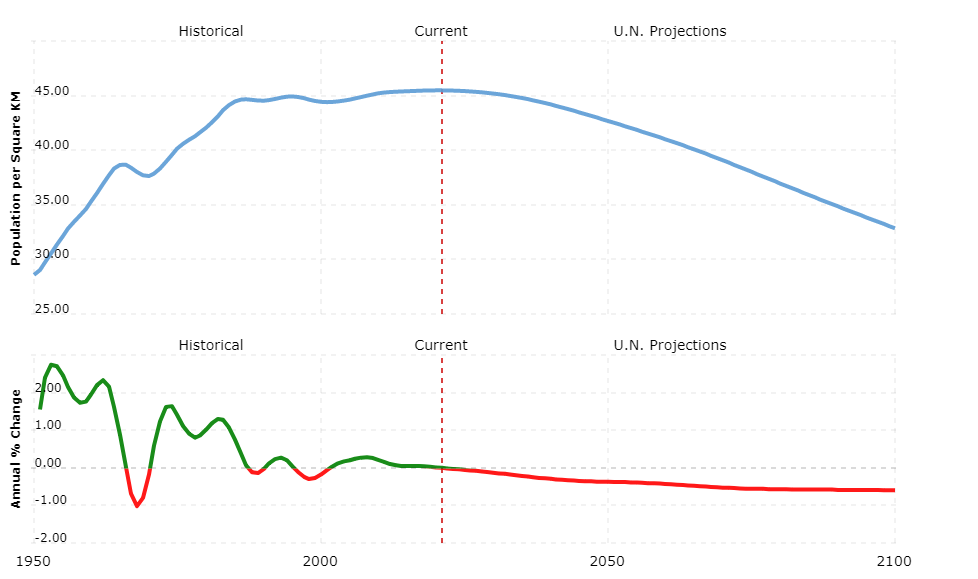 On June 3, 2006, Montenegro became an independent republic after 55.5% of the population voted for independence from Serbia in a referendum, with which it had existed in a confederation since 2003. The turnout was 86.3%. The 55% majority required for independence was only just exceeded. Montenegro is now recognized worldwide under international law and has been included in numerous international organizations. A political milestone was the adoption of a constitution in October 2007.

The head of state is the President (Filip Vujanovic since June 2006); The head of government is the Prime Minister (Milo Djukanovic since February 2008). The president is directly elected for five years; he proposes the Prime Minister, who is then selected by the People’s Assembly. The one-chamber parliament in Podgorica has 81 seats; the election period is four years.

Montenegro is divided into 21 municipalities (Opstini); The official language is (since the constitution of 2006) Montenegrin. Both the Latin and Cyrillic alphabets are in use.

The Montenegrin economy has not yet completely overcome the transition phase between the socialist economy and the social market economy. The unemployment rate was 19.6% in 2012, salaries and wages per person are only EUR 5 760 per year (as of 2014). The gap between rich and poor is very large. Montenegro joined the World Bank and World Monetary Fund in 2007 and is aiming for EU membership.

In agriculture, in which only 6% of the population is still active, vegetables, cereals, potatoes, tobacco, wine, citrus fruits, olives and figs are grown.

The large industry, especially the metal industry, mining and shipyards, has been privatized. Important mineral resources are bauxite, iron ore and lignite.

Tourism is one of the most important sources of income in the country. It became the focal point of further economic development, since after a period of political instability in the 1990s, the number of visitors increased again. In 2012, almost 1.5 million tourists visited the country.

The currency of Montenegro is the euro introduced as a foreign currency.