The state of Eritrea, an independent country since 1993, is located in Northeast Africa on the Red Sea. With an area of ​​121,144 km², the country is about a third the size of Germany. Eritrea borders Sudan in the north and west, Ethiopia and Djibouti in the south and the Red Sea in the east. The Dalak Archipelago, which consists of around 200 islands and lies off the coast in the Red Sea, also belongs to the state territory.

The coastline on the Red Sea is almost 1,000 km long and between 30 and 50 km wide. In the north, the country rises steeply to the highlands (1,500 to 2,500 m), which is the northern part of the Ethiopian highlands and occupies about a third of the country’s area. The highest peak in Eritrea is the Soira at 3,018 m. The southern part of the country stretches along the Red Sea. Here the volcanic Denakil Mountains rise behind the coastline to altitudes of around 1,000 m. Between these mountains and the highlands further to the west is the Denakil Valley, which is up to 120 m below sea level and has some salt lakes. The Denakil Valley is part of the East African trench system and is considered one of the hottest areas in the world.

The capital Asmara is located in the highlands at an altitude of approx. 2,350 m on the border with Ethiopia.

The climate in Eritrea is partly dry, partly there is a changeable tropical climate and differs depending on the altitude. In the central highlands (approx.2,000 to 2,500 m above sea level) it is temperate, the average temperatures are around 22 °C. Daily highs of 30 °C can be reached in summer, low values ​​around freezing point in winter. There are two rainy seasons in the highlands, which last from March to April and from June to December. The average rainfall is around 500 mm annually.

The temperatures along the coast are consistently high all year round, with an annual average of 30 °C. In the northern coastal area, the average rainfall is around 200 mm annually, the majority falls in the months of December to February. To the south, the precipitation decreases to 50 mm per year. Almost no precipitation can be measured in the Denakil Valley.

In the coastal areas with little rainfall, semi-desert and thorn bush savannah with succulents, acacias, aloe and myrrh prevail. Mangroves grow on the coast itself. There is hardly any vegetation in the Denakil Valley, only a few plants that are extremely well adapted to the drought can survive here. In central and northern Eritrea, dry forests with juniper, stone yew, dump palms and tamarisk trees are found. On the mountain slopes of the highlands there are stocks of the deciduous Combretum forest and dense grass cover. The coniferous stocks that were previously available were decimated to a few residues for firewood extraction.

By deforestation and expansion of the settlement area, the formerly rich animal world of Eritrea was decimated by the restriction of a suitable habitat. Various antelopes are numerous, such as the oryx antelope, Dorkas gazelle and the kudu. In the country, black baboons, vervet monkeys, cheetahs, leopards, bat-eared dogs and jackals also occur. The rare species include, for example, the Somali wild ass and the Eritrea gemsbok. Especially in the coastal area the bird life is very diverse, often you can find eg ibises, ospreys, flamingos, herons, pelicans and spoonbills. The Red Sea is very rich in various types of fish and corals, some of which are endemic. Rare animals include the up to 3 m long dugongs that belong to the manatees.

Around 4.56 million people live in Eritrea, although there is no reliable data on the population, which is growing rapidly (population growth 3.6%). The residents essentially belong to nine ethnic groups, among which the Tigrinians (Tigrinya, Tigrini) with around 50% and the Tigre and Kunama, who belong to the nomadic peoples, with around 31% the two largest groups. Other groups are the Afar, Bilen, Hadareb, Nara, Rashaida and Saho. All ethnic groups speak their own languages, mainly Tigrinya (which belongs to the Semitic languages) and Arabic, but also English are spoken as common languages. Apart from a small religious group of animists, about half of Eritrean residents are Muslim (Tigre, Afar) and the other half are Christians (followers of the Eritrean Orthodox Church).

The country’s population density is very low at around 35 people per square kilometer. According to COUNTRYAAH, 17% of Eritreans live in cities, the largest city is the capital Asmara with around 501,000 residents. The standard of living in Eritrea is very low due to the consequences of the decades-long war and recurring droughts, a large part of the population lives in extreme poverty. The health and education system is poorly trained. The average life expectancy in Eritrea is 52 years, still 41% of the residents (and more than half of the women) are illiterate. The country is dependent on foreign food deliveries. 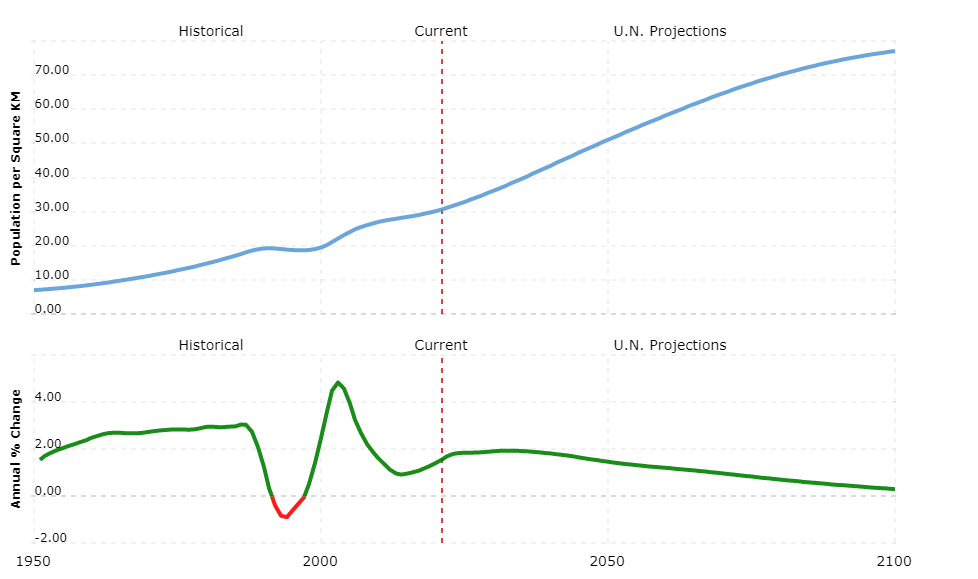 The new constitution of the Republic of Eritrea was promulgated in 1997, but has not yet come into force. The provisional constitution of 1994 is valid. Isaias Afewerki, who was elected by the then central committee of the EPLF, has been president and head of government since May 1993. He is also the commander-in-chief of the armed forces.

The 150-member Transitional Parliament, of which 75 are members of the State Party PFDJ (People’s Front for Democracy and Justice), meets only at the President’s request. The 1997 constitution also provides for a multi-party system. In the current transition phase, no political parties apart from the PFDJ are permitted.

In addition to the Supreme Court, there are regional, but also military and special courts.

The country is divided into six administrative regions.

Eritrea is one of the poorest countries in the world. When the country gained independence in 1993, its industrial infrastructure was almost completely destroyed by the war with Ethiopia. Another war with Ethiopia, a subsequent multi-year drought and an increasingly centralized economic policy have once again done great damage to the economy. The ongoing copper and gold production has brought the country an increasing economic growth in recent years.

At present 80% of the workforce is employed in agriculture, but barely a fifth of the gross domestic product (GDP) is generated here. Agriculture is only possible to a limited extent due to the prevailing climatic conditions, most of the growing areas are in the milder regions of the highlands. Among others, millet, vegetables, corn, tobacco, legumes, cotton and coffee are grown. Fishing is important for the food of the population.

The industry is only moderately developed and contributes almost a quarter to GDP. The most important branches of industry are food processing companies and the textile industry. Eritrea has mineral deposits off the coast of mineral resources, and deposits of gold, nickel, copper and chromium have also been found.

Sudan, Ethiopia and Japan are the most important trading partners for the export of goods (especially food and livestock, textiles, industrial goods). When it comes to imports (mainly machinery, food, semi-finished goods), Italy leads the United Arab Emirates, Germany and Great Britain.

Around 875 km of the approximately 4,000 km of road are paved. International airports are located near the capital Asmara and in Massau. Important ports of Eritrea are Massawa and Assab.

The national currency is the nakfa.