With an area of ​​28.051 km², the Republic of Equatorial Guinea is one of the smallest countries on the African continent.The country consists of a mainland part on the west coast, the two volcanic islands Bioko and Pagalu and several smaller islands. See Equatorial Guinea country abbreviation.

The mainland Mbini represents 93% of the total area of ​​the country. It borders Cameroon in the north, Gabon in the east and south and the Atlantic Ocean in the west.From the approximately 150 km long and 15-25 km wide coastal plain, the country rises to a height of approx. 1,200 m. The volcanic islands of Bioko (2.017 km²) and Pagalu (17 km²) belong to the volcanic chain of the Guinea archipelago. Bioko lies off the coast of Cameroon, Pagalu about 400 km off the Gabon coast. The landscape of the two islands is dominated by steep mountains. The capital of Equatorial Guinea, Malabo, is located on Bioko. On this island is also the highest peak in the country, the Pico de Santa Isabel (also: Basile) with 3 008 m. The Mbini (also: R¨ªo Benito), which originates in Gabon, flows through the country for a length of approx. 190 km.

Due to the equatorial location of the country there is a tropical, humid climate with high temperatures all year round and lots of rainfall. The average temperature is around 25 °C all year round. On the mainland, a large part of the precipitation (up to 4,000 mm in total) falls in the months of February to June and from September to December. The air humidity is very high all year round.

Equatorial Guinea has extensive areas of tropical rainforest. Along the coast are mangrove swamps, cultivated land further inland. On the island of Bioko, a large part of the rainforest has been replaced by plantations, remaining areas can be found at higher altitudes, there is also a savannah. On Pagalu there are mainly coconut and oil palms.

According to COUNTRYAAH, about 500,000 to 600,000 people live in Equatorial Guinea, more than 40% of them in cities. The largest city is the capital Malabo on Bioko with around 60 100 residents, followed by Bata on the Atlantic coast (50 000 residents). Members of the Bantu peoples make up about 80% of the population; the largest group by far are the Fang, further the Benga and Bujeba. On the island of Bioko, the Bubi, who are also among the Bantu peoples, make up the majority of the population, while they only make up around 10% of the total population. The majority of the population is Catholic, although many also practice natural religions parallel to the Christian faith. Protestants are only a religious minority.

The standard of living of the population is very low, Equatorial Guinea is one of the poorest countries in Africa. There is no functioning health system, and there is an inadequate supply of food. Infant mortality is high, life expectancy is low, but has increased significantly in recent years (women 62, men 60 years). Due to compulsory schooling for children aged six to 14, the literacy level is now 87%.

The official language in Equatorial Guinea is Spanish, with the different Bantus languages ​​being used in everyday life. English is predominantly spoken on Pagalu, and there is also Portuguese Creole. 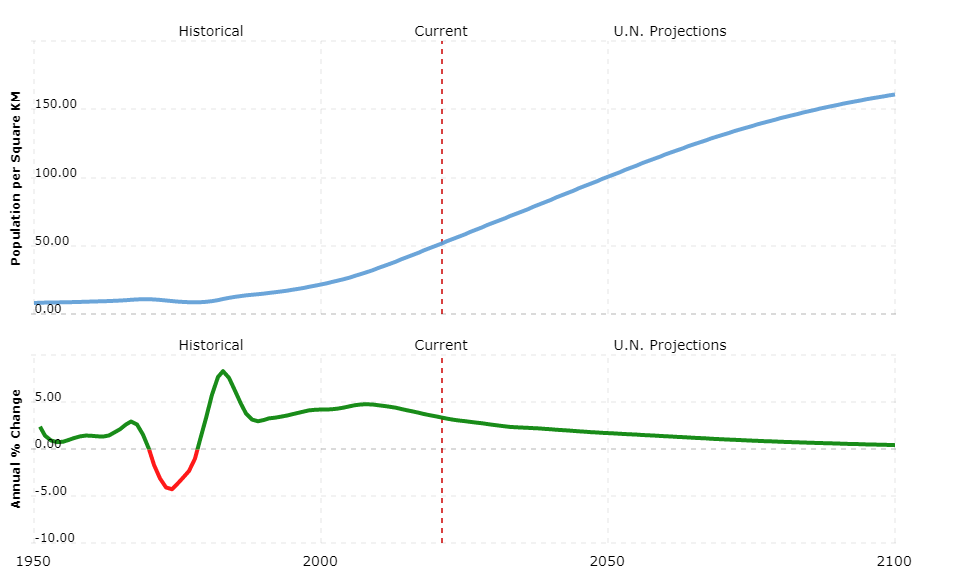 Equatorial Guinea is a presidential republic and has been independent since 1968 (previously a Spanish colony). The basis is the 1991 constitution, which was amended in 1995. The head of state with far-reaching powers is the president (Teodoro Obiang Nguema Mbasogo, PDGE since August 1979), who is directly elected by the people for a term of seven years. The president is also the commander-in-chief of the armed forces. The government is led by the Prime Minister (Vicente Ehate Tomi since 1012), as are the cabinet members, and the head of government is appointed by the President.

The legislature lies with the Parliament (Camara de Representantes del Pueblo), which consists of one chamber. The 100 members are elected by the people for five years.

The country is divided into seven provinces (provincias).

At the turn of the millennium, Equatorial Guinea was one of the poorest countries on the African continent. The country’s economic development came to a standstill as a result of the dictatorship in the 1970s. In 1993, international aid programs from the World Bank and the International Monetary Fund were canceled due to continued mismanagement and corruption in the country. The oil discoveries at the end of the 1990s, however, led to astonishing economic growth, with the concessions for the extraction being largely in the hands of foreign companies. The country is now the third largest African oil producer south of the Sahara, but the local population still hardly benefits from it.

Due to the high income from oil production, the agricultural sector now only generates 3% of the gross domestic product. With the exception of the cultivation of the export goods cocoa and coffee, agriculture is geared towards covering the population’s own needs. 80% of the mainland is covered with dense, tropical rainforest, so that only about 8% of the total land area can be used for agriculture. In addition to cocoa (especially organic) and coffee, rice, manioc, jams and bananas are also grown. Fishing is important for the self-sufficiency of the population. Wood is one of the country’s export goods.

The only moderately developed industry is geared towards processing wood and fishery products. The structure of small businesses was largely destroyed during the dictatorship. In this sector, the oil discoveries are again responsible for an industrial production increase of 30%. Other mineral resources are manganese, gold and uranium, which have not yet been mined.

The country’s infrastructure is poorly developed. There is no railway and only about 1000 km of paved roads. The country’s main ports are in the capital Malabo on the island of Bioko and in Bata on the mainland. Malabo Airport is the largest in the country.