The Republic of Zambia is a landlocked country in the transition area between Central and South Africa. With an area of ​​752.614 km², the country is more than twice the size of Germany. The republic is named after one of the country’s numerous rivers, the Zambezi. Zambia borders on Tanzania in the northeast, Malawi in the east, Mozambique in the southeast, Zimbabwe and Botswana in the south, Namibia in the southwest,Angola in the west and the Democratic Republic of the Congo in the north.

Thanks to the Katanga peak, which extends deep into the Zambian state territory in the north and belongs to the Democratic Republic of the Congo, the country is divided into a northeastern and a southwestern region. The largest part of the country is occupied by a high plateau rising from south to north, which lies at an altitude of 1,000 to 1,500 m above sea level and is dominated by individual island mountains and mountain ranges. The highest elevation in the country (1,848 m) is in the Muchina Mountains, which extend from the southern tip of the Katanga peak towards the northeast to the border with Tanzania. To the southeast, the mountains are bordered by the Luangwa Valley, which continues as the Zambezi Valley. The Makuta mountains are located northwest of the Muchina Mountains in the border area with Tanzania.

The numerous rivers and lakes of Zambia represent almost half of the fresh water reserves in southern Africa. The most important river in Zambia is the Zambezi, which flows through the country over a length of around 1,550 m (total length 2,660 km). On the border with Zimbabwe, the Zambezi falls over a width of 1,700 m over 110 m (Victoria Falls). Other large rivers include the Kafue in the central part of Zambia and the Luangwa and Luapula in the east. Zambia’s largest lakes include Lake Mweru (on the border with the Democratic Republic of the Congo), Lake Tanganyika (which also includes the Democratic Republic of the Congo, Burundi and Tanzania) and Lake Kariba, a reservoir.

The capital Lusaka is in the southeast of the country.

Zambia has a tropical climate with a rainy season from October to April. The average rainfall in the north is around 1,400 mm, in the south around 750 mm. The precipitation often falls as heavy thunderstorms. In the capital Lusaka, the average January temperature is 22 °C, in July values ​​around 16 °C are measured. In general, the temperatures in the river lowlands are somewhat higher than in the highlands.

Almost 40% of the country is covered with forests. In the southwest there is rain forest, in the river valleys and on the high plateau deciduous dry forests (with baobab and mukunya trees) or evergreen forests. In the flooded areas, grasslands and swamps dominate with extensive papyrus growth. The central part of the country is characterized by wet savannah with open grasslands and individual groups of trees (acacias).

The wildlife in Zambia is one of the most biodiverse on the African continent. A total of 19 protected areas have been established (and cover around 9% of the country’s area), the largest of which is the 22,500 km² Kafue National Park. Larger species of mammals include rhinos, elephants, hippos, giraffes, buffalos, monkeys, lions, leopards, hyenas, antelopes and zebras. In the Lochinvar National Park alone, more than 400 different bird species were counted.

According to COUNTRYAAH, 11.28 million people live in Zambia, about 40% of them in cities. The largest city is the capital Lusaka with around 1.5 million residents (due to the unregulated influx from abroad there are only estimates). Other large cities are Ndola (population 380,000), Kitwe (365,000) and Kabwe (180,000). The average population density is 15 people per square kilometer.

The population is made up of over 70 ethnic groups, most of whom belong to the Bantu peoples. The largest population group are the Bemba (approx. 36%), followed by the Nenya (Nyanya, approx. 18%, including Chewa, Nsenga, Ngoni) and Tonga (approx. 15%, Lenje, Soli, Ila). Other groups are the Luvale, Lunda and Kaonde in the northwest of the country and the Barotse (Rotse). Minorities are Europeans, Asians and Bushmen.

In addition to English, there are seven officially recognized tribal languages ​​(Bemba, Nyanya, Lozi, Tonga, Lunda, Kaonde, Luvale), and a large number of dialects are spoken. About two thirds of the population are followers of Christianity, and there are also a large number of Muslims and Hindus.

Despite the very high birth rates, population growth is estimated at 1.9%, which is due to the high infection rate with the immunodeficiency disease AIDS (16.5%) and the high infant mortality rate (8%). Almost half of the population is under the age of 15. Social and health services are only moderately developed and completely inadequate in rural areas. The average life expectancy is around 40 years. Around 80% of Zambians can read and write; school attendance is required for seven to 14 year olds. 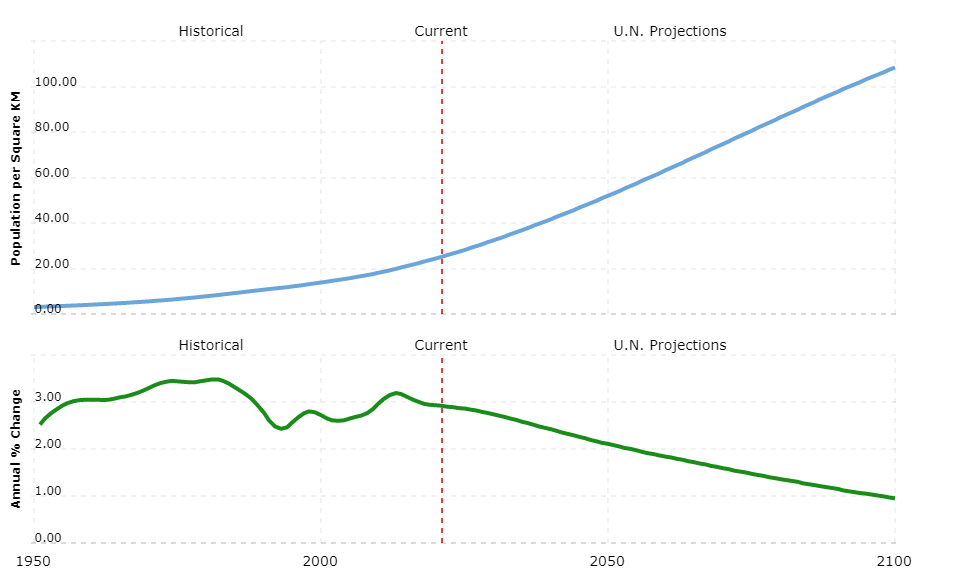 The constitution dates from 1991. The head of state in the Republic of Zambia is the president (since September 2011 Michael Sata), who is also head of the government and commander-in-chief of the armed forces. He is elected by the people for a term of five years (one-time re-election possible). He appoints the vice president and cabinet members.

The National Assembly consists of a chamber with 158 seats; 150 people are elected by the people for five years, eight are appointed by the president. The House of Chiefs has 27 members.

Zambia is divided into ten provinces.

Zambia is rich in natural resources and there are opportunities for prosperous agriculture. The country is now one of the middle-income countries in the lower range, but the wealth is extremely unevenly distributed, 60% of the population live below the poverty line.

Agriculture employs over three quarters of Zambians, and around 20% of GDP is generated here. For their own use, manioc, millet, rice, vegetables, fruit and sweet potatoes are grown, and tobacco, cotton and peanuts for export. The population’s food needs cannot be met, partly due to the recurring droughts. Fishing in the country’s numerous waters is also important in the agricultural sector.

The industry focuses on processing copper, Zambia’s most important export commodity. Other industrial companies manufacture food, textiles, chemical products and products for the construction industry. Most of the factories are located near the capital Lusaka and in Kitwe, Mufulira and Ndola. The most important area in Zambia’s economy is mining: in addition to copper, cobalt, hard coal, zinc, lead and silver are mined. The country’s energy needs are almost entirely met by hydropower.

The most important trading partners for exports (copper, cobalt, electricity, tobacco) are China, India, the Democratic Republic of the Congo and South Africa. South Africa is the most important partner for the import of goods (especially machinery, vehicles, food, fuel).

The road network in Zambia covers a total of around 92,000 km, of which an estimated 20,000 km are paved. Part of the 2,200 km rail belongs to the Tanzania-Zambia Railway (TAZARA) and is under the control of Tanzania. Due to the numerous bodies of water, shipping plays an important role in transport, around 2,250 km are navigable. There are several international airports in Zambia.