The Republic of Yemen (officially: Al-Jumhuriya al-Yamaniya) is located in the southwest and south of the Arabian Peninsula. In terms of area, the country is the second largest on the peninsula after Saudi Arabia and about one and a half times the size of Germany. With its sea sides, Yemen borders the Arabian Sea and the Gulf of Aden to the south and the Red Sea to the west; in the country it has borders with Saudi Arabia in the north and Oman in the east. The vast majority of Yemeni territory consists of deserts or semi-deserts. Only the high plateau in the interior (mountain Yemen) as well as some oases and the areas around the rivers are fertile. The Socotra archipelago on the east horn of Africa, the island of Kamaran in the Red Sea and the island of Perim in the strait between the Gulf of Aden and the Red Sea also belong to the national territory.

There are three landscape regions on the mainland, the coastal plain, mountain Yemen and the deserts in the east.

The mostly barren coastal plain is up to 70 kilometers wide. The southwestern coastal lowland (Tihama means “hot country”) on the Red Sea is one of the hottest regions on earth. The average temperature here is around 27.8 °C, the annual rainfall is almost 100 mm. The coastal region merges inland with hilly landscapes that have a savannah-like character and are covered with steppe grass and acacias. The sandy plain that runs along the Gulf of Aden is crossed by so-called wadis, dry desert valleys that are mostly waterless and only become rivers for a short time due to heavy rainfall. The largest is the Wadi Hadramaut and is located on the eastern south coast of Yemen. The valley is over 300 m deep and about 250 km long. An up to 2,000 m high, uninhabited limestone plateau (Al-Djaul) separates the Wadi Hadramaut from the coast.

The most fertile and populous part of the country is Yemen, which extends 200 km to the east and east of the Tihama. Its highest mountain – the highest in Arabia – is the Hadur Shu’ayb at 3,760 m. Further to the east, the highlands sink into the third landscape region, which consists partly of sand dunes, for the most part extensive gravel and rubble deserts, savannah and steppe zones and merges with the Mahra Mountains on the border with Oman.

The capital and largest city of the Republic of Yemen is Sana’a with 1.75 million residents; the second largest city is the much smaller Aden (approx. 580,000 residents).

The climate in Yemen varies depending on the region and the season. Except in the western highlands, where there is a lot of rain in summer, the desert climate is hot. Strong sandstorms also occur on the coast of the Red Sea.

There are three different climatic zones: The coastal region on the Indian Ocean has a subtropical climate. In summer it can get hot in the so-called Tihama with very high humidity up to over 40 °C a day, in winter the temperatures are 30 to 35 °C and the humidity is lower. In the mountainous regions of Northern Yemen, temperatures are up to 30 °C in summer and around 25 °C in winter. It cools down noticeably in winter, especially at altitudes above 2,500 m, and from 3,000 m the freezing point can be reached at night. During the rainy season in March and April as well as in July, August and September, there are short, heavy rains in this region, which make terraced fields possible in the western part. There is a dry and hot climate in the desert zones:

Two thirds of the country consist of deserts or desert-like vegetation areas with correspondingly sparse flora. In general, three vegetation zones can be differentiated in Yemen: the coastal regions, the middle plateaus and the inner highlands. Date palms and citrus fruits grow on the hot, dry sea coasts. Especially on the Red Sea, but also on the Gulf of Aden (thorn shrub savannah) there are salt plant bushes. In contrast, food crops are often grown in the terraced plateaus of the low mountain ranges. There are also wild millet plants and eucalyptus species. In the mountain regions, shrubs (hardwood trees) and herbs occur, whereby succulents occur in fog zones in particular, which are able to store water for a long time due to their tissue structure.Another special feature is the deep valleys (wadis),

The wildlife habitat in Yemen has been severely affected in recent decades. 100 years ago panthers, antelopes and lions lived in different landscapes, today the baboon is the largest living mammal. There are also small populations of hyenas and hares. A very diverse and partly not yet researched number of birds and insects also have their home here. The most biodiverse habitat is the coastal waters in the Red Sea and the Gulf of Aden. Tuna, sharks, sardines, lobsters and octopuses can be found here.

Around 95% of the population in Yemen are Yemenis of Arab descent. There are numerous population groups and tribes that are often very isolated due to the fragmentation of the regions. There are different ethnic groups from region to region. African negrides can be found on the coast in the west and South Asian influences in the south of the country. In the Wadi Hadramaut in the east, on the other hand, a Malay impact can be seen.

According to COUNTRYAAH, half of the 19.72 million Yemenis are under the age of 15; the average life expectancy is 62 years. Inadequate medical care and poor hygienic conditions lead to high child mortality (6.15%). Nevertheless, the population growth is very high at 3.45%. The central residential areas of Yemen are the immediate coastal region and some oases as well as the agricultural highlands. With the exception of the few nomads living there, the desert regions are hardly or not inhabited at all.

Yemenis are of Arab origin without exception. The state religion is Islam, whose Sunni beliefs have around 53% of the population and almost 47% are Shiites. Jews, Christians and Hindus are only tiny minorities in the population.

The literacy rate of the Yemeni population is very low at 50%, this rate resulting from the low level of schooling of the female population (only 30% of women can read and write). 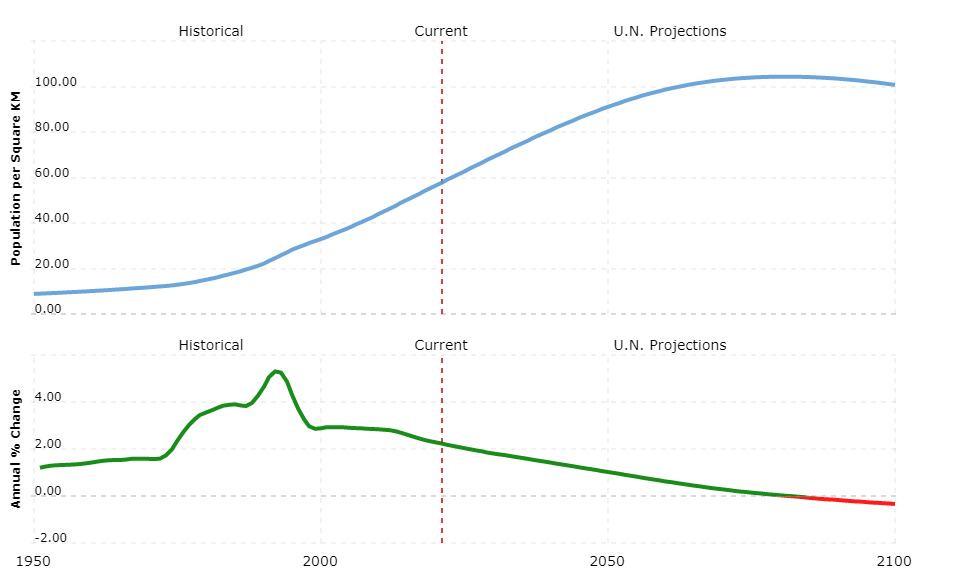 According to the 1994 constitution (amended in 2001), Yemen is a republic based on Islamic law (Sharia). A state president (Abed Rabbo Mansur Hadi, since 2012), elected directly by the people (women have both active and passive voting rights) for a period of five years, has extensive competencies at the head of the state and executive. Among other things, he appoints the Prime Minister (Mohammed Basindwa, since 2011) and the Council of Ministers.

Parliament has 301 members elected for six years. The main parties are the General People’s Congress (GPC), the Yemeni Association for Reform (Islah) and the Yemeni Socialist Party (YSP).

In addition to the executive branch exercised by the state, tribal law also plays an important role. The heads of the ethnic groups (sheikhs) represent the tribe externally, speak law and are responsible for security and order in their area.

There are 20 administrative districts (muhafazat, singular: muhafazah) and one capital district.

Yemen is one of the poorest countries in the Arab world. The economy, which has seen significant growth in recent years, depends solely on oil exports. The unemployment rate is enormous: official figures speak of 40%, in fact it is likely to be even higher. Over half of the population lives below the poverty line.

Agriculture only provides 8% of the gross domestic product, mostly it is structured in the form of a pure subsistence economy. The difficult climatic conditions, especially the extreme water scarcity, are problematic. Millets, corn, wheat and barley are cultivated especially in the highlands. The export products cotton, coffee, fruit and vegetables also thrive here. However, the most profitable crop is Kath, a drug plant that is mostly consumed in the country itself. The cultivation of the plant takes up about 20% of the agricultural area and is increasing.

Yemeni coffee is a rarity. Its small beans have a very strong aroma; Towards the end of the 17th century, Yemen had a monopoly on coffee. Due to the global competition, the former Mokha coffee harbor has long lost its former importance. The same applies to frankincense: the tree resin, like myrrh, continues to be cultivated and offered, but is no longer an important trade factor. In addition to plant cultivation, Bedouin pasture management is important. Goats, sheep, cattle, donkeys and camels are kept, sheep and goat skins are exported.

The only major companies in the country are the salt gardens and the oil refinery near Aden, where the economic center is located and next to Al Ahmadi the most important port in Yemen. Around 90% of revenue comes from the export of oil and oil products, with production volumes being relatively low compared to the rich neighboring countries and falling further due to the rapidly declining oil reserves. In addition, aluminum, cotton products and leather goods are manufactured industrially on a small scale. Exports flow mainly to China, India and South Korea. The most important import goods are food, live animals, machines, vehicles and finished products from the United Arab Emirates, Saudi Arabia, China and India.

Tourism, formerly an important source of income, fell sharply due to terrorist attacks on tourists and kidnappings.