With an area of ​​390.759 km², Zimbabwe is roughly the size of Germany and Belgium combined.

A mountain range runs through the country from northeast to southwest. The broad ridge is called Hochveld and reaches heights of up to 1,500 m. In the north and south, the mountains descend in marked steps over the so-called Mittelveld (heights between 400 and 800 m above sea level) to the banks of the Zambezi in the north and the Limpopo in the south. Mount Inyangani in the far east is the highest elevation in the country at 2,596 m. In the north the Zambezi rushes over the famous Victoria Falls and is then dammed up as Lake Kariba.

The largest city in the country is the capital Harare with around 1.45 million residents, followed by Bulawayo (678,000 residents).

Zimbabwe is in the marginal tropical climatic area, but due to the high altitude it has a temperate climate with dry, sometimes cool winters (average temperatures in July approx. 16 °C). In the summer month of January the average temperature is approx. 21 °C. Most precipitation (rainy season from approx.November to March / April) occurs in the eastern mountain regions (up to 1,400 mm), while less rain falls in the south.

In the rainy areas in the east of Zimbabwe there are areas with evergreen forest, while in the dry south there are semi-deserts. The main part of the country is covered by grass savannas and savannahs with deciduous trees (baobab, mohobohobo tree).

Large parts of these areas have been cleared for agricultural use. Not least because of the interests of tourism, large parts of the country have been declared a nature reserve. This benefits the species-rich wildlife: in addition to elephants, giraffes and zebras, there are also cheetahs, leopards, lions, peregrine falcons and ospreys. Specimens of the endangered black rhinoceros also live in these areas. A horn of this animal, praised as an aphrodisiac, among other things, can still bring in several thousand dollars on the black market.

Zimbabwe has around 12.75 million residents. Virtually the entire population consists of black Africans, the largest ethnic group being the Shona (over 80% of the total population), followed by the Ndebele group (15%). In addition, small minorities like the Tonga live in the state. The long tensions between the two largest ethnic groups have decreased since independence. The remaining 2% of the population are Europeans (mostly of British origin), half-breeds and Asians.

In the rural areas, the dialects of the corresponding ethnic groups are predominantly used. Shona and Ndebele, along with English, are the official languages ​​of Zimbabwe and are also taught in schools. School attendance is required in Zimbabwe, and there has been a university in the capital Harare since 1957. Around 90% of Zimbabweans can read and write.

AIDS is a major threat to the Zimbabwean population: it is assumed that every seventh adult Zimbabwean is infected with the HIV virus. The extent of the consequences for the country’s social and economic structures cannot yet be predicted. Even today, the average life expectancy is only 35 years; infant mortality is 7%. Due to the crisis in the country, numerous Zimbabweans are fleeing, especially to South Africa. Accordingly, the population grows by only 0.5% every year despite high birth rates. 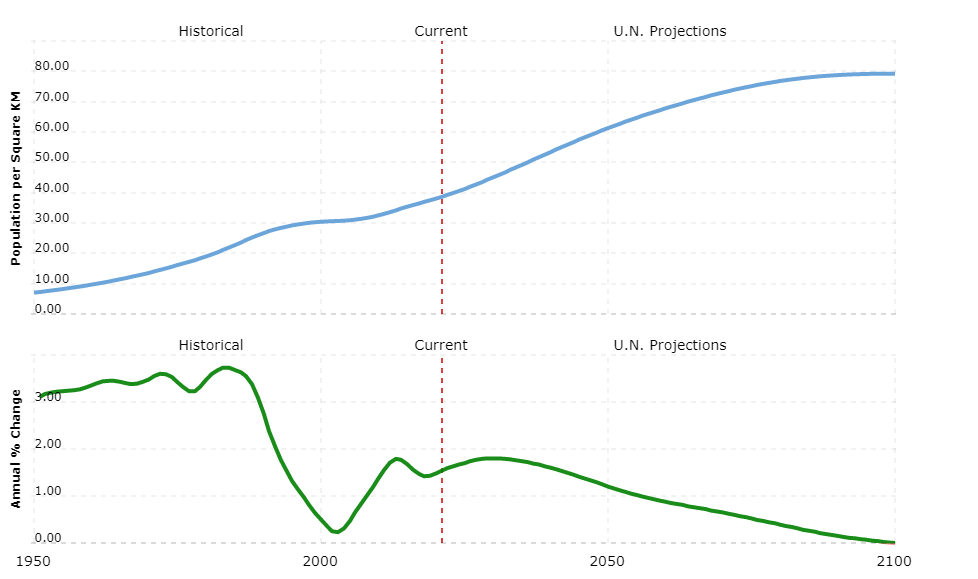 According to the 2013 constitution, Zimbabwe is a republic, the president (Robert Gabriel Mugabe since 1987) as head of state is directly elected every five years and is the top leader of the armed forces. A one-time re-election is possible. He appoints his cabinet, which in turn is responsible to the parliament.

The legislature lies with the House of Assembley, which consists of 210 members. The Senate has 80 members (60 directly elected, 18 indirectly elected, 2 ex officio). Elections are made every five years. Every citizen of Zimbabwe from the age of 18 has the right to vote.

Zimbabwe is divided into eight provinces and two cities, Harare and Bulawayo.

Zimbabwe’s economy has been badly damaged after decades of mismanagement, corruption and political unrest. Almost three quarters of the population live below the poverty line.

The land reform that Mugabe pushed ahead was accompanied by bloody clashes and massively weakened the agricultural sector. Around 12% of gross domestic product (GDP) is still generated here today. There is extensive cattle farming (including goats, pigs and sheep). In addition to sugar cane, corn and tea, cotton, wheat, millet and coffee are also grown. However, many smallholders have opted for more profitable tobacco growing, which has reduced food production.

Zimbabwe has rich mineral resources, which include platinum, gold and diamonds, coal and, above all, various ores. Mainly consumer goods, machines and fuels are introduced. Half of these goods are delivered from South Africa. Exports – minerals, gold, platinum – also go to South Africa, and China and Zambia are also customers.

The infrastructure has suffered significantly as a result of inadequate maintenance measures in recent years, and there are always power shortages.

Harare has an international airport.

The Zimbabwe dollar was abolished and replaced by the US dollar and the South African rand.