The Kingdom of Swaziland is located in the south of Africa and is the second smallest country on the continent with an area of ​​17,363 km² after Gambia. The country borders South Africa in the south, west and north, and Mozambique in the east.

The country descends in stages from the west (foothills of the Drakensberg as part of the Great Fringe of South Africa) to the east (lowlands of Mozambique). Three stripes of landscape running from north to south can be distinguished: The mountainous region in the west (Highveld, 1,000 m and higher) is severely divided by rivers. Here is the highest point in Swaziland, the Emlembe at 1,862 m. To the east follows the so-called Middleveld, which is at an altitude of 500 to 1,000 m. The flat Lowveld borders in the east (200 to 400 m height). In the northeast, Swaziland has a share in the Lebombo Mountains, a plateau of volcanic origin up to 800 m high.

The country’s four largest rivers are the Komati, Usutu, Mbuluzi and Ngwavuma, which flow in a west-east direction and flow into the Indian Ocean in Mozambique.

The subtropical climate prevailing in Swaziland is tempered by the higher altitudes. In the summer month of January, the average temperatures in the highveld are around 18 °C and in the lowveld around 26 °C. In winter (July) the average values ​​are 12 °C in the west and around 16 °C in the east. Most of the precipitation falls in the summer months (October to April). An average of 1,000 to 2,000 mm is measured in the high field, and an average of 500 mm in the low field. The annual rainfall in the Lebombo Mountains is between 750 and 1,000 mm.

The vegetation of the Highveld is characterized by grass fields and forest stands, which are mostly due to large-scale reforestation campaigns with pine and eucalyptus. With a size of over 40,000 hectares, the Usutu forest is the largest contiguous forest area that was created in Africa by afforestation. The original savannah area of ​​the Middleveld has largely given way to cultural and pastureland. In the Lowveld there used to be malaria-contaminated swamp areas next to the prevailing dry savannah, which have now been drained and used as agricultural land.

The wildlife in Swaziland is rich in species. Antelopes, zebras, giraffes, monkeys, jackals and lions live here. The largest of the existing protected areas is the Mlilwane Game Reserve, which is located in the west of the country. Other protected areas are Hlane in the northeast and Malolotsha in the north of Swaziland.

Around 1.17 million people live in the Kingdom of Swaziland, 84% of whom belong to the Swazi people. Zulu (10%), smaller groups of Tsonga and other Bantu-speaking peoples also live here. Around 8,000 whites live in the state. According to COUNTRYAAH, 27% of the population live in cities, the capital Mbabane has about 70,000 residents. The Middleveld is the most densely populated area, the least people live in the Lowveld.

English and Siswati are official languages ​​(the government language is English), and other Bantu languages ​​are also spoken. Almost three quarters of the population are followers of Christian-oriented religions, but they are often mixed with traditional religious practices. The population grows only 0.6% every year because a third of the population is infected with the HI virus. Accordingly, the average life expectancy has dropped sharply in recent years and is now only 32 years.

School attendance is not compulsory, but the illiteracy rate is comparatively low at 18%. There is a university in Kwaluseni. 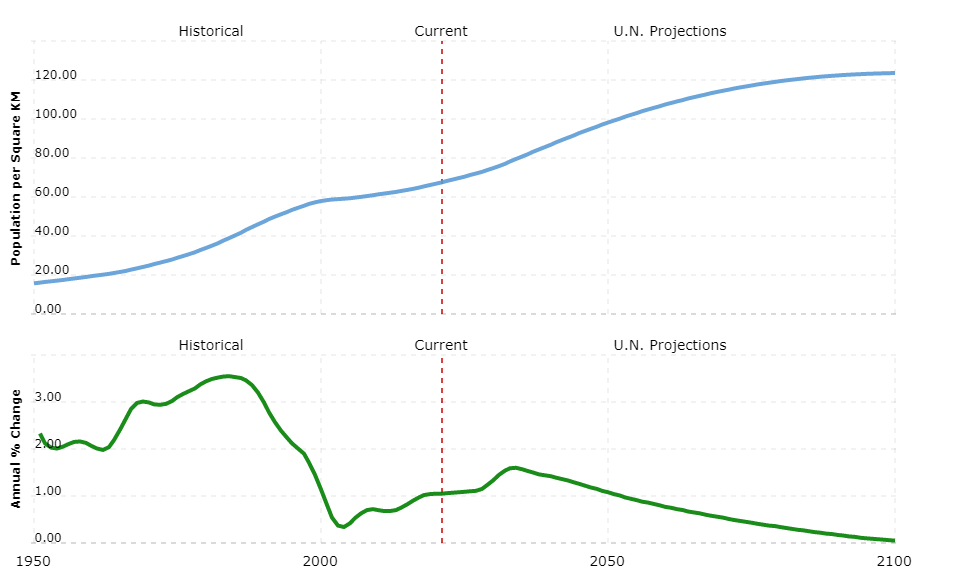 In Swaziland there is an absolute monarchy according to the 2005 constitution. The king (Mswati III since 1986) is head of state and owner of executive and legislative power. He appoints the Prime Minister (Barnabas Sibusiso Dlamini since October 2008) and the other members of the government.

Swaziland is divided into four districts.

The kingdom is relatively wealthy compared to other African countries. However, only a few Swazi participate in this prosperity: almost two thirds of the population live below the poverty line. Unemployment is also high; it affects over a third of the population.

A third of Swaziland’s population is employed in agriculture, and three quarters of the country’s total area can be used for this. The most important area is livestock farming (cattle). Large farms (mostly run by whites or private companies) mainly cultivate sugar cane, citrus, pineapple and cotton for the domestic market and for export. Beans, corn, millet and sweet potatoes are grown in subsistence farming. Since the drought in the early 1990s, Swaziland has been dependent on food imports; numerous people are starving.

Tourism is an important source of foreign currency, most of the visitors come from South Africa.

Around 1,000 km of the total of almost 3,600 km of roads are paved. The rail network comprises around 300 km and connects the inland to ports in Mozambique (Maputo) and South Africa (Durban). It is used exclusively for freight transport. There is an international airport between Manzini and Mbabane, the King Mswati III International Airport.