The Republic of Suriname, formerly Dutch Guyana, is located on the north coast of South America. It has an area of ​​163,465 km², which is slightly more than twice the size of the German state of Bavaria. Two regions are not included in the area information, one in the southeast on the border with French Guiana and one in the southwest on the border with Guyana, the ownership of which is controversial between the neighboring countries. In addition to the two national borders with French Guiana and the Republic of Guyana, Suriname has another country border with Brazil in the south. The entire northern border of the country is occupied by the Atlantic Ocean. The capital is Paramaribo with around 244,000 residents. See Suriname country abbreviation.

The former Dutch colony consists of four landscape regions, which consist of a coastal zone, plain, hills and mountains from north to south. The narrow coastal zone has isolated mangrove forests, sand banks and swamps. Further to the south is a plain, which was formed from sand and clay from the Amazon estuary and whose fertile soil is used as the main growing area in the country. Further to the south is a hilly region, partly based on sand sediment and rich in quartz. The fourth landscape region, which consists of a massif, the southern and central areas of which are completely covered with rainforest, occupies over three quarters of the country’s area. Within this massif, the highest mountain in the country rises in the Wilhelmina Mountains, the Julianatop at 1 280 m. The largest lake in Suriname is the Blommestein lake, which is dammed up at Afobaka and feeds from the Suriname river. Other important rivers are Courantyne, Coppename and Maroni, which, like the Suriname, flow northwards into the Atlantic.

The climate in Suriname is tropical and shows very little temperature difference during the year. The average monthly temperature in the capital Paramaribo fluctuates between 26 °C in January and 27 °C in July. Two rainy seasons, a large one in summer and a shorter one in winter, cause annual rainfall to increase from around 1,500 mm on the coast to 2,500 mm inland. The air humidity is consistently high all year round.

About 90% of the country is covered by tropical rainforest. The rainforest has more than 1,000 tree species and its biodiversity in terms of flora and fauna has so far been only partially explored. The coastal habitats are better researched, where in addition to the predominant mangrove vegetation, more than 4,000 plant species can be found, including numerous fern herbs, mosses and herbs. Between the rainforest in the north and the coastal region in the south there is a narrow strip, which consists of natural savannah with appropriate grasses and isolated bushes. Another savanna area is in the rain shadow of the Wilhelmina Mountains in the south of the country.

The fauna of Suriname is made up of around 150 different animal species. The largest mammal living in the wild is the tapir, other mammals that live in the rainforest and the mountain region include monkeys, wild boars, deer, llamas, jaguars, ocelots, armadillos and anteaters. In addition to an alligator species (caiman), there are numerous iguanas and giant snakes on reptiles. Sea turtles live on the country’s coasts. The bird life is very rich in species, ornithologists include about 650 bird species, including vultures and various parrots. The sea and inland water show a comparable biodiversity with an estimated 350 fish species.

Due to the eventful history, the structure of the population, which has a total of only around 440,000 people, is very heterogeneous: 37% of the population, and thus a relative majority, are Surinamese (“Hindustani”) descendants from India. At 31%, creoles represent an almost equally large part of the population. There are also Indonesians (14%), blacks (9%) and Indians (3%). Almost 40% of the population belong to the Christian faith, 27% are Hindus, 19% Muslim. The rest of Suriname often practice animistic beliefs.

The official language is Dutch, English is also widely spoken. Another specialty is the Creole language Taki-Taki, which is spoken by many younger citizens and of course by the Creoles themselves and is widely used as a lingua franca.

The average life expectancy in Suriname is 70 years; the population grows only 0.6% percent per year due to the relatively low birth rate and emigration. According to COUNTRYAAH, 93% of Surinamans over the age of 15 can read and write. 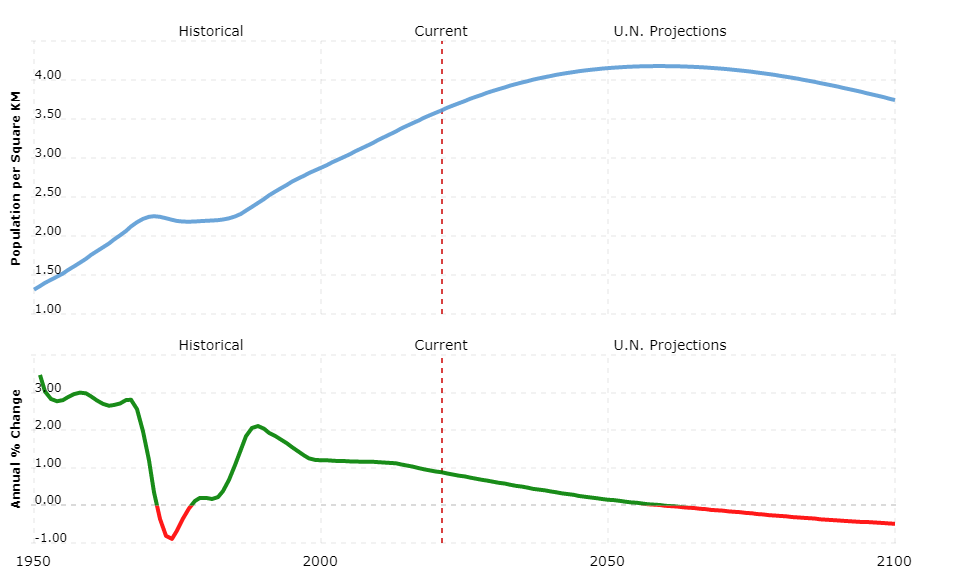 According to the constitution of 1987, Suriname is a presidential republic with a multi-party system, the legal system of which is based on that of the Netherlands and France. The President, who was elected by Parliament for five years (Desir¨¦ Bouterse since August 2010), holds an outstanding position in the political system due to his extensive executive powers. At his side is a 14-member so-called State Council, which also acts as a supervisory and advisory body. The 51 members of the National Assembly elected by the people for five years each have a legislative function.

The country is divided into nine districts and one capital district.

Agriculture, which only accounts for 9% of the gross domestic product (GDP), is concentrated on the fertile coastal area. Rice, bananas and nutmeg are the main crops, some of which are exported and some of which are consumed in the country. The fact that nine tenths of the country is overgrown with tropical wood gives the timber industry a solid foundation.

The dominant industrial sector (36% of GDP) is largely based on the mining of bauxite in the mines of the eastern hills. It accounts for almost three quarters of export earnings. The processing of aluminum has taken place in the country since an appropriately dimensioned power plant was built to generate the necessary energy. Gold mining and oil production are also important.

The country’s most important trading partners have historically always been the Netherlands; In recent years, however, imports (fuel, food, cotton and consumer goods) have mainly come from the United States. Exports (bauxite, aluminum, gold, crude oil) are delivered to Norway, the USA and France.

Tourism is a growing sector.

The main port is Paramaribo; The country’s international airport is located in Zanderij, about 50 kilometers from the capital.

The currency is the Suriname dollar (= 100 cents).