With an area of ​​587,041 km², Madagascar (after Greenland, New Guinea and Borneo) is the fourth largest island in the world. It lies around 400 km off the coast of East Africa in the Indian Ocean. The island was created at least 50 million years ago when it separated from the primary continent of Gondwanaland.

The island has various forms of landscape: three quarters of the area is occupied by a highland that is between 800 and 1 600 m above sea level. The highlands are furrowed by the course of numerous rivers and have some mountain ranges. In the east runs a massif from north to south, which rises up to 2,876 m (Tsaratanana in the north of the island), in the middle part of the plateau heights up to 2,642 m are reached (Ankaratra). The highest mountain on the island is the Maromokotro with 2,886 m. The highlands drop steeply towards the almost straight east coast, towards the bay-rich west coast over pronounced strata and terraces. There are numerous coral reefs off the dissected west coast. The east coast is characterized by numerous lagoons with white sandy beaches. The larger rivers on the island, Betsiboka, Mangoky and Tsiribihina,

The capital Antananarivo (French: Tananarive) has around 1.4 million residents.

The island’s tropical climate varies depending on the region and altitude. While temperate, dry climate prevails in the highlands (average temperatures in the capital Antananarivo in January 21 °C, in July 13 °C), the coast is rather hot, humid (eg in Toamasina on the east coast in January an average of 26.5 °C, in July 21 °C). In places, temperatures up to approx. 35 °C are also reached.

The southeast side of the mountains receives high rainfall all year round (Toamasina 3 245 mm). In the highlands and on the west side there is a dry season of around six months (approx. April to October), the annual rainfall amounts to approx. 1,000 to 2,000 mm. While it rains around 250 days a year in northern Madagascar, rainfall falls on average 150 days a year in the south. In the south and southwest, an average of no more than 400 mm is measured annually. Between November and April, violent hurricanes, the so-called Mauritius orcs, keep appearing in Madagascar.

Due to the early detachment of the island from Gondwanaland, Madagascar has developed a unique flora and fauna with numerous endemic species. While most of the crops cultivated today are imported to the island, there are more than 7,000 native plant species, many of which only occur in Madagascar. Of the lush tropical rainforest that once covered most of the island, only remnants are preserved in the east and northwest of the country. Numerous plant species are still suspected there, which have not yet been discovered. In addition to carnivorous plants, there are over 1,000 species of orchids here. On the high plateau, tree savannah predominates, which merges into dry savannah or thorn shrub savannah with succulents, euphorbias, baobab trees and Madagascar palms. Large parts of the original vegetation have been replaced by cultivation areas and pastures. Mangrove forests can be found on the coasts.

Madagascar’s fauna with numerous endemic species is just as unique as the flora. Around 50% of all bird species found here only occur on the island, and 95% of reptiles. Large mammals, typical of mainland Africa, do not occur in Madagascar. Due to the lack of monkeys, the so-called semi-monkeys developed particularly well on the island. They include the lemurs, which, apart from Madagascar, only occur on the commors. The lemurs include, among other things, kattas, varis and various types of maki such as the wool, the rat and the mouse lemur (with around 16 cm with the smallest primates). Even today, new subspecies of the lemurs are discovered using genetic analysis. The semi-monkeys also include the finger animal (Aye-Aye), who digs under the bark for insects using his long thin middle fingers.

There are around 350 different reptile and over 3,000 butterfly species on the island. The bird world also shows an unusual diversity with many endemic species (such as the Madagascar guinea fowl and the Madagascar nuthatch).

In connection with the discovery of new plant and animal species, scientists repeatedly warn against the increase in global species extinction due to the threat to habitats. Her main focus is on islands such as Madagascar or the Philippines, where numerous species have now become extinct that cannot be found anywhere else in the world. According to the experts, the 14 nature reserves in Madagascar are not sufficient.

According to COUNTRYAAH, 99% of the approximately 18 million residents of the island are Madagascans, most of whom are of Malay Indonesian origin. Small groups of Chinese, Indians and French form minorities. The island is inhabited by a total of 18 ethnic groups; Traditionally, there are strong contrasts between the highland tribes that formed the country’s leadership and the coastal tribes. The largest ethnic group are the Merina with around 27%, which, like the Betsileo (approx. 12%), belong to the highland tribes. Other groups are the Betsimisaraka (15%), the Sakalaven (6%), Antandroy (5%) and Tsimihety (7%).

The official languages ​​in Madagascar are French, Malagasy (Madagascan) and since 2006 also English. Over half of the population are followers of natural religions, around 40% belong to Christian religions. Muslims form a minority.

Around 45% of the total population are younger than 15 years, the population density is around 31 residents per square kilometer. The population is growing rapidly (3.02%), despite the high child mortality rate of over 7%. The average life expectancy is 56 years. School attendance is compulsory for children between the ages of six and 14, but the literacy rate is only around 69%. 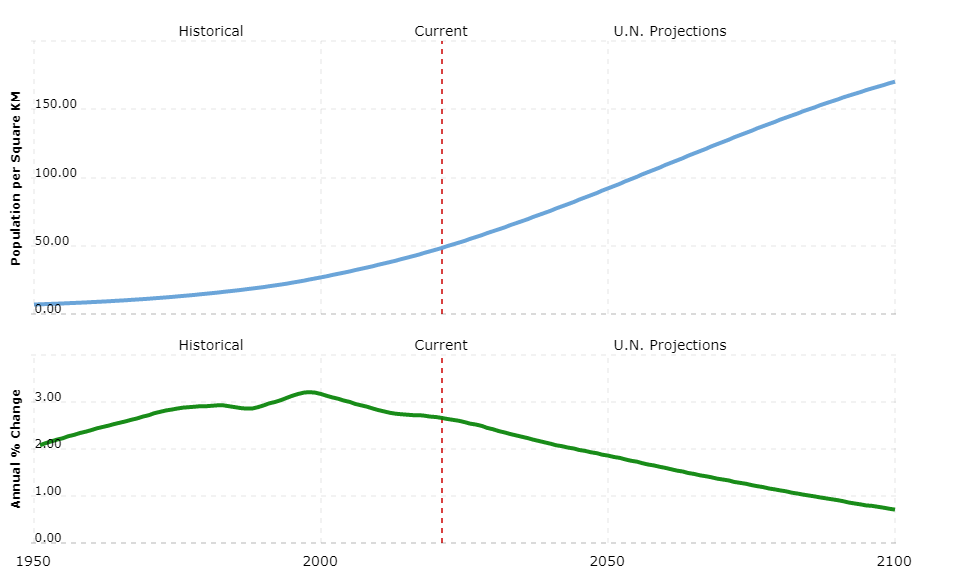 According to the 2010 constitution, Madagascar is a presidential republic. The head of state is the President (Hery Rajaonarimampianina since January 2014), who is directly elected by the people for five years. The Prime Minister is the Prime Minister (Roger Kolo since April 2014). The President appoints the Prime Minister on the recommendation of Parliament. The legislature lies with the two-chamber parliament, which consists of the National Assembly and the Senate. The 127 members of the National Assembly are directly elected by the people for four years. The Senate has 90 members, two thirds of whom are appointed by regional assemblies and one third are appointed by the President. The Senate’s term of office is six years.

Madagascar is divided into 22 regions.

The most important economic sector is agriculture, which generates around 30% of gross domestic product (GDP). More than 70% of export earnings come from this area. Bananas, rice, potatoes, manioc, corn and taro are grown for personal use. Coffee, cocoa, cloves, sugar cane and tobacco are exported. Another important export item is vanilla.

For many tribes, livestock farming is the basis of life. The remaining forest stands are mainly used for the extraction of firewood, only small amounts of tropical wood are exported. Soil erosion is a growing problem.

The moderately developed industry (17% of GDP) is dominated by food processing companies. Glass, tobacco and textiles are also produced. Various ores, quartz, gold, bauxite, chromium and nickel are present in mineral resources in Madagascar, which have so far been mined only to a limited extent. The oil deposits are also only partially promoted. The country’s energy requirements are met to over 50% by hydropower.

Madagascar mainly exports to the USA and France and imports the necessary food, consumer goods and crude oil from France, China and Hong Kong.

At the end of 2004, the Ariary replaced the Madagascar franc as the official currency.