The republic, which has been independent since 1991, is located in south-eastern Europe on the Balkan Peninsula and, with an area of ​​25,714 km², is about two thirds the size of Switzerland. The country borders Serbia to the north, Bulgaria to the northeast, Greece to the southeast and south, and Albania to the west. Macedonia is the only country on the Balkan Peninsula that has no direct access to the sea.

The country is characterized by several mountain ranges and is located in a tectonically active region. The west is occupied by high mountains that belong to the Dinaric Alps. The country’s highest elevation (Golem Korab, 2,764 m) is located here on the border with neighboring Bulgaria. Basin landscapes and deeply carved valleys can be found between the individual mountain ranges. In the east of Macedonia, low mountain ranges reach an average height of 1,000 m, occasionally up to 1,700 m. The Vardar flows through the center of the country as the longest river in a wide valley. He flows into Greece as Axios in the Aegean. In the south-west of Macedonia there are several large lakes that were created by tectonic processes.They include Lake Ohrid, through which the border with Albania runs, and Lake Prespa,

The capital Skopje is located in the upper valley of the Vardar in the north of the country.

A predominantly Mediterranean climate with dry, hot summers and mild winters determines the climate in Macedonia. The average temperatures in Skopje in the Vardar Valley are 2 °C in January and around 25 °C in July. Continental climatic influences are increasing in the higher parts of the country, where the winters are much colder.

The average rainfall in the capital Skopje is 550 mm. In the mountains, up to 2,000 mm of rain is measured, which mostly falls as snow in winter.

In the lower regions of the country there are mainly agricultural areas and maquis. At the lakes in the southwest of Macedonia there are still stocks of oak, fig and walnut trees. In the mountains up to a height of around 1,300 m there are forests with beeches, chestnuts and maple, and in higher altitudes fir and pine. From around 2,000 m, mountain pines and junipers predominate, which merge into alpine mats.

In the remote regions of the mountains, animal species such as lynx, wolf, brown bear, ibex and golden eagle also find a suitable habitat. Deer, deer and wild boar are found in the deciduous forests. The lakes in the south-west of the country are particularly rich in species.

According to COUNTRYAAH, 65% of the population are Macedonians; the largest minority are Albanians (about a quarter of the population), who live mainly in areas in the northwest of the country on the border with Kosovo. Turks have a population share of around 4%, Serbs, Roma and Romanians form small minorities. Most Macedonians are Orthodox Christians (67%) of the Serbian, Macedonian, Bulgarian or Greek Church, while the Albanians and Turks are predominantly followers of Islam. The official language is Macedonian, which belongs to the Slavic languages, and since November 2001 also Albanian in the regions where more than 20% Albanians live. Turkish, Serbian and Romani are also spoken.

The social and health system in Macedonia is well developed, but benefits are limited by the economic problems of the state. In general, the standard of living of the population decreased in the 1990s. Population growth is only 0.1%, which is also due to emigration; the average life expectancy is 74 years.

Children are required to attend school for eight years and attending school is free of charge. The literacy of the population is given as almost 94%. 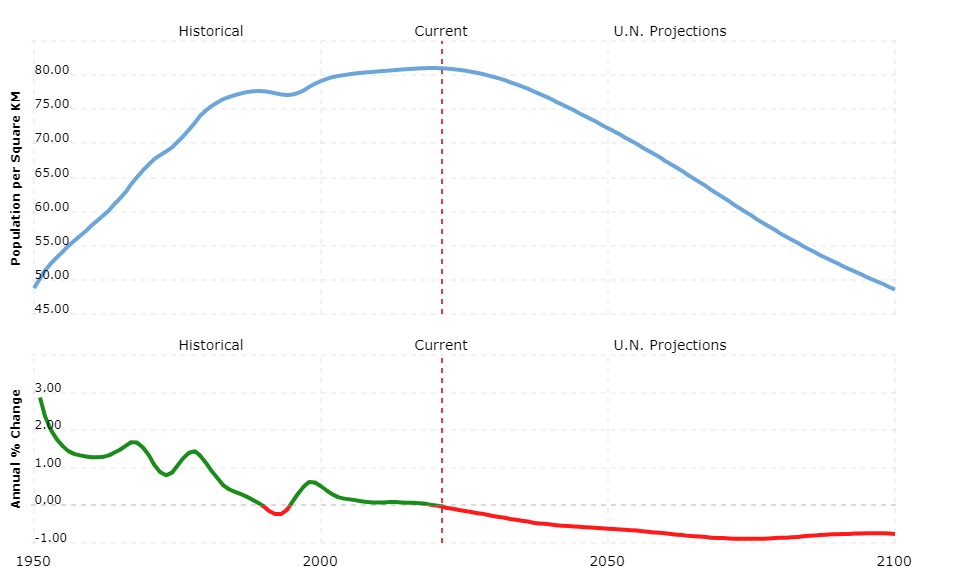 According to the 1991 constitution, Macedonia is a presidential republic with a multi-party system. The head of state is the President (Gjorgje Ivanov since 2009), who is elected by the people for a term of five years. He is commander in chief of the armed forces and appoints the Prime Minister (since 2006 Nikola Gruevski) as head of the government.

The legislature lies with the parliament, which consists of one chamber (sobranie). The 120 MPs and three representatives of the Macedonians abroad are elected by the people for a term of four years.

Macedonia is divided into eight statistical regions with 84 municipalities (Opstini), whereby the ten Opstini of Skopje are summarized as “Greater Skopje”.

Macedonia was the least developed economic republic of the former socialist Yugoslavia. Two thirds of the trade was with the other Yugoslav republics. The dissolution of Yugoslavia and the international sanctions against Serbia and Montenegro (1992) and the Greek trade embargo against Macedonia had a correspondingly devastating effect. From the mid-1990s, most foreign investors withdrew their capital due to the Kosovo crisis. The economy recovered with loans from the World Bank and the International Monetary Fund, but slipped into recession again in 2009 as a result of the global financial and economic crisis; the gross domestic product (GDP) fell by 0.3% in 2012. At the same time, high unemployment (approx.

Agriculture generates around 11% of GDP, and an estimated 20% of the workforce is employed here. A good half of the state territory is agricultural land. The main crops are cereals, sugar beets, sunflowers, tobacco, fruit and wine. Livestock farming (especially sheep) plays only a minor role.

Macedonia has mineral resources such as coal, zinc, lead, silver, gold, antimony, iron ores, copper and chrome, but the deposits are only partially developed. Almost a third of all employees work in industry, with a 28% share of GDP. The most important branches of industry are the iron industry, the processing of food and the manufacture of textiles.

The road network covers around 10,600 km, of which around 5,500 km are paved. There are almost 930 km of rail, a main route runs through the Vardar Valley from Belgrade to Soloniki. There is an international airport in Skopje and Ohrid.

The currency is the Macedonian dinar.