The Republic of Haiti comprises the western third of the Hispaniola island. In the east, Haiti borders on the Dominican Republic, in the south on the Caribbean Sea and in the north on the Atlantic. In the west, the approximately 95 km wide windward passage separates Haiti from the island of Cuba. With an area of ​​27 750 km², the country is about the size of Albania. The islands of Vache, Grande Cayemite, Gonâve and Ile de la Tortue (Tortuga) also belong to the national territory. See Haiti country abbreviation.

Haiti is the most mountainous country in the Caribbean. There are only a few larger levels between the individual mountain ranges, such as the Plaine du Nord and the approximately 300 m high Plateau Central in the south. Two peninsulas encompass the 120 km wide Gulf of Gonâve. The northern peninsula is crossed by the Massif du Nord, the southern by the Massif du Sud and the Massif de la Selle. Here is the country’s highest peak, Pic de la Selle at 2,680 m.

The longest river in the country is the Artibonite, which originates in the Dominican Republic and flows into the Gulf of Gonâve after a length of around 170 km. Etang Soumâtre, a highly saline lake, lies on the Cul-de-Sac plain on the southeastern border of Haiti.

The capital, Port-au-Prince, is at the southeast end of the Gulf of Gonâve.

Haiti’s climate is tropical, humid and warm, with consistently high temperatures all year round. The average values ​​on the coast are between 25 °C and 29 °C, inland it is one to two degrees less. The average amount of precipitation is up to 2,000 mm, most of the precipitation falls in April / May and September / October. On the south-facing slopes of the mountains and in the plains, the amount of precipitation is significantly lower and is around 500 mm per year. Hurricanes can occur especially in late summer.

Haiti’s territory was originally covered by tropical forest, which has now been largely cleared. Less than 10% of the country’s area is still forested, resulting in soil erosion, desertification and species deprivation. On the plains there is dry and moist savannah with cacti, on the coast mangrove forests. Remains of the original vegetation and the variety of plants can still be found, for example, in the Massif de la Selle and in the Macaya National Park.

Due to the extensive destruction of the natural habitat, the fauna is extremely poor in species. Only in the more remote regions of the mountains do reptiles, amphibians, birds and insects occur in many different species. The waters off the coast of Haiti are rich in fish.

The largest population group with around 95% are the descendants of black African slaves, mulattoes (crossbreeds of blacks and whites) make up around 4.9% of the population. Christianity is the predominant religion: around 80% are Catholics, another 16% belong to Protestant communities and sects. The voodoo cult is widespread and is often practiced in parallel with Christianity.

The two official languages ​​in Haiti are French and Creole, a mixture of French and African dialects. French is used by just under 10% of the population, most of whom belong to the upper class.

Haiti is one of the poorest countries in the world, the standard of living of the population is very low. Social and medical care is inadequate, more than 80% of people live in extreme poverty. The consequences are an extremely high infant mortality rate (almost 74 per 1,000 births) and a low life expectancy of 53 years on average. According to COUNTRYAAH, the population growth is 1.6%. The high birth rate of an average of five children per Haitian is offset by an equally high HIV infection rate (5.6%). Despite compulsory schooling, literacy is only around 53%. 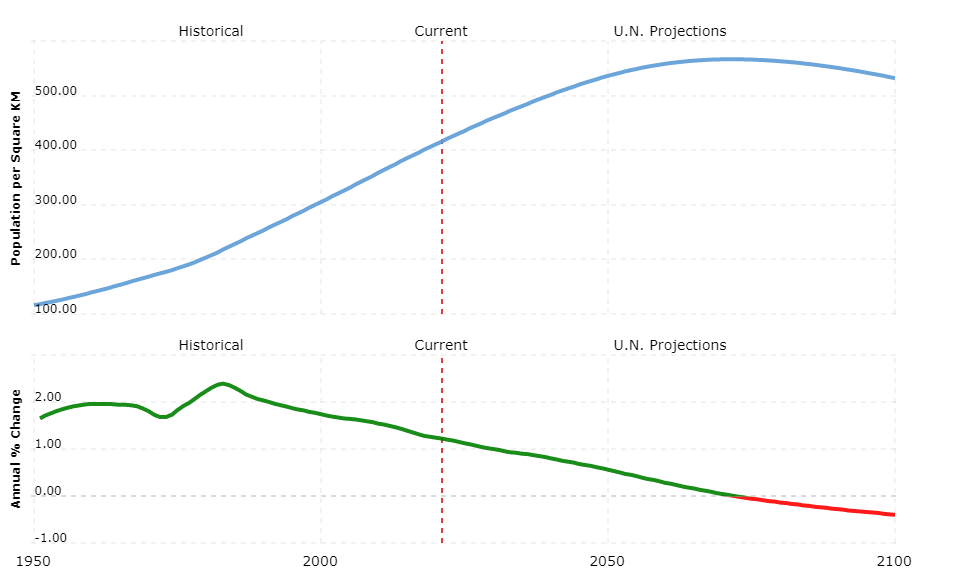 Haiti is a presidential republic under the 1987 constitution (repealed in 1988-89, fully reinstated in 1994). The head of state is the president elected by the people for five years (since May 2011 Michel Martelly). A second term immediately following is not possible. The President appoints the Prime Minister to head the government, who is usually the leader of the majority party in Parliament (Evans Paul since December 2014).

The legislature lies with the parliament, which consists of two chambers: the House of Representatives with 99 members, elected by the people for a four-year term, and the Senate with 30 members. A third of the senators are elected every two years, the term of office is six years.

The legal system is based on the French model.

Haiti is divided into ten departments.

Decades of dictatorship, corruption, civil wars and natural disasters such as the severe earthquake in 2010 have brought Haiti to the brink of economic ruin. Almost 60% of the population live below the poverty line and the unemployment rate is estimated at 65%. This makes the republic the poorest country in the western world.

Almost two thirds of the workforce is employed in agriculture. This sector contributes almost 30% to the gross domestic product. Subsistence farming predominates, for example mangoes, bananas, cassava, sweet potatoes, rice and millet are grown. Coffee and sugar cane are cultivated for export. Food has to be imported on a large scale.

The industry is poorly developed and focuses on the processing of agricultural products (sugar refinery). Other areas are textile, building materials and light industry (assembly of prefabricated parts). Tourism plays no role due to the tense political situation.

The road network covers a total of around 4 100 km, of which about a quarter is paved. The most important port is Port-au-Prince, there is also an international airport.