The Cooperative Republic of Guyana is located in northeastern South America. The country has three neighboring countries: Venezuela in the west, Brazil in the southwest and south, and Suriname in the east. Guyana borders the Atlantic to the north. With a land area of ​​214,969 km², the country is about two thirds the size of Germany. See Guyana country abbreviation.

The geographic surface structure can be divided into two regions: on the one hand in the highlands, which run parallel to the borders with Brazil and Venezuela almost to the coast and occupy more than two thirds of the country, on the other hand in a 15 to 70 km wide coastal lowland, which stretches along the 435 km long Atlantic coast. In the south and southwest, the north-east slope of the highlands is up to 1,300 m high, and in the immediate vicinity of the border, the highest mountain in Guyanas rises (2,810 m). Further north the country merges into the hilly country. Parts of the coastal areas have been impounded with dams by the former Dutch colonial masters and are therefore below sea level.

The longest river in Guiana is the Essequibo, which rises on the Brazilian border and flows into the Atlantic after about 1,000 km near the capital, Georgetown. Other water-rich rivers are the Corantijn (border river to Suriname) and from east to west Berbice, Dermerara, Mazaruni and Cuyuni, all of which flow into the Atlantic.

Guyana has a tropical climate, which is characterized by a main rainy season from April to August and a short rainy season in December and January.

The annual rainfall increases from south to north. In the south it averages around 1,500 mm a year, and to the north it rises to values ​​of 3,000 mm a year. The capital Georgetown on the Atlantic has a value of 2,050 mm.

The average annual temperatures in Guyana change only insignificantly in the individual months. They are between 26 °C and 27 °C, with a very high humidity all year round.

About 70% of the country’s area is covered by tropical rainforest. The lowland rainforest is divided into three to five tree floors. The highest is formed by tropical trees up to 60 m high, the lowest by trees around 15 m high. The tropical mountain rainforest begins at an altitude of 1,000 m above sea level and is somewhat sparse. In addition to the large-scale rainforests, savannahs are particularly found in the coastal lowlands and in the southwest. Mangrove forests can be found on the coasts. Various other saltwater grasses also grow in standing brackish water and protect the coastlines through their existence.

Just as in the rainforests, where not nearly all plant species have been identified, the same applies to the animal world that lives in this fertile habitat. The bird life with many different hummingbirds and the countless insects is particularly rich in species. For example, the tapir, which is the largest mammal in the country, lives more hidden. The same applies to the Jaguar and the Ocelot. Monkeys and deer appear in large numbers. The anteater, sloths and armadillos as well as the bush pig are typical for the animal world of the savannah landscapes. The biggest scavenger is the vulture. In the numerous rivers there are caimans and snakes, such as the giant anaconda and the water boa, which live in the area of ​​the rivers. Iguanas from the lizard family also live in Guyana. The largest freshwater fish is the piraucu, that can reach a length of up to four meters. Sharks and numerous other fish live in the coastal waters.

The approximately 769,000 residents of the country concentrate mainly on the coastal strip on the Atlantic and here in turn on the cities. Of these, the capital Georgetown with 139,000 residents is the country’s metropolis.

As in the neighboring country of Suriname, Guyana has a high proportion of Asians and Asian people. About half of the population are of Indian descent, 30% are black, 12% mixed and 4% Indian. Although they form the nominal majority of the population, the Indians play a subordinate role in national politics. For example, they are systematically discriminated against when it comes to job creation in the state.

The following picture emerges for religious affiliations: according to COUNTRYAAH, 50% of the population belong to Christian religions, with Protestantism predominating, a third are Hindus and 9% Muslims.

The official language is English, but depending on the prevailing ethnic group, almost a dozen different tribal dialects as well as Hindi and – especially in the country – Patois are spoken.

The population growth of the small South American state is due to the strong emigration almost to zero, life expectancy is 65.5 years. Almost 99% of the population can read and write. 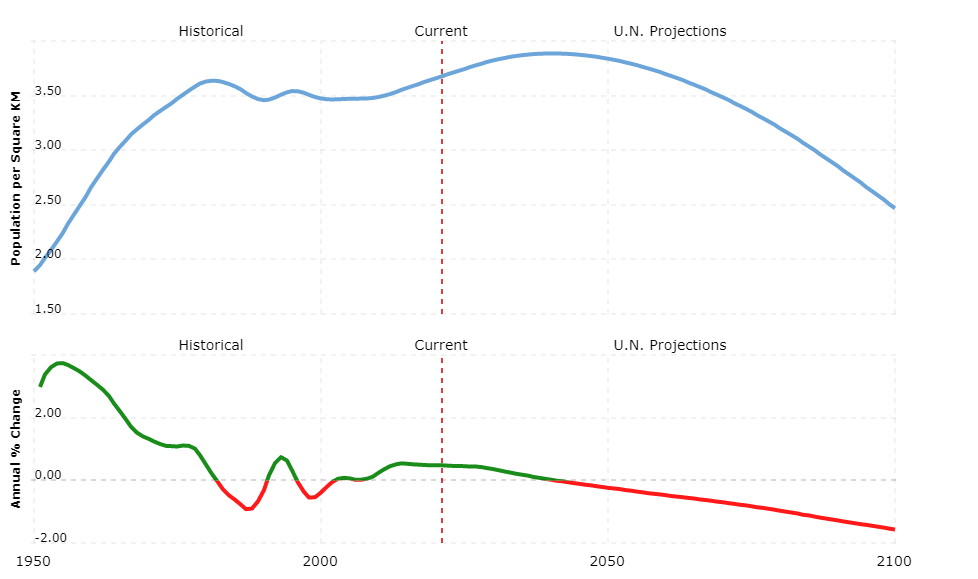 According to the 1980 constitution, Guyana is a presidential republic with a multi-party system. A president elected for five years (Donald Ramotar, since December 2011) heads the state as head of state and supreme holder of executive power. He is elected by the leading party and appoints the ministers. The head of government has been Samuel Hinds since 1997.

The legislature consists of only one chamber, the National Assembly, which has 65 members. 40 are elected every five years by universal suffrage, 25 by the provinces. The most important parties in the country are the Progressive People’s Party (PPP) and the Socialist National People’s Congress (PNC).

Guyana is divided into ten regions and its legal system is based on English and Dutch criminal law.

Despite the rich natural resources that the country has, Guyana is one of the most underdeveloped countries in the world. Large parts of the population live below the poverty line. Critical factors are the weather dependency of the agricultural sector (drought risk), the political unrest, the scarcely developed infrastructure and the lack of skilled workers for the industrial sector. However, the economy is developing positively: since 2010 the gross domestic product (GDP) per capita has increased from almost 3000 to almost 4000 US dollars / year.

The most important agricultural export good is sugar. But rice, coconut palms and tropical fruits are also grown. The Guyanese timber industry is comparatively underdeveloped, fishing is becoming more important.

In the highly fragmented hilly country in the north inland there are bauxite deposits that are exploited and have a significant share in the total industrial export value of the country. Another important export good is gold. Machines, vehicles, fuels, food and consumer goods are mainly imported from the USA, Trinidad and Tobago, Great Britain and Cuba.

The country’s main seaports are Georgetown and New Amsterdam, and the international airport is near Georgetown.

The currency is the Guyana dollar.