The Republic of Greece (Hellenic Republic; officially Greek: Ellinik¨ª Dimokrat¨ªa) is located in south-eastern Europe and forms the south of the Balkan Peninsula. The country is surrounded by the Mediterranean in the west, south and east. The mainland border in the north is around 1,170 km long, where Greece borders Albania,Macedonia,Bulgaria and Turkey.Numerous islands belong to the national territory: Crete is in the south, the Aegean to the east, and the Ionian Islands to the west. The total coastline of Greece is over 15,000 km.

The total area of ​​the country is 131 957 km², about 80% of which is in the mainland part of Greece. This can be divided into a northern, a middle and a southern part. The Dinaric-Hellenic fold mountain system runs from north to south through all three parts. It runs parallel to the coast of the Ionian Sea and continues across the islands of Crete and Rhodes towards Asia Minor.

In the northern part of Greece, the rugged Pindos Mountains rise to a height of 2,637 m (Sm¨®likas). To the west of the mountain range is the Epirus hills, to the northeast is the Macedonian highlands. To the east of the Pindos is the highest mountain in Greece, Mount Olympus at 2,917 m, to the south of Mount Olympus is the Thessaly basin. The Chalkidiki peninsula with its three finger-like foothills Kassandra, Sithonia and Magion Oros extends far into the Aegean. At its northern end lies the city of Saloniki (with approx. 384,000 residents) in a lowland. Thrace lies in the extreme north-east, where the country has a share in the Rhodope mountain range, which mainly lies on Bulgarian territory.

The central part of Greece extends south to the Gulf of Patras and the Gulf of Corinth, which separate the Peloponnese peninsula. In Central Greece, the mountain ranges Giona (up to 2,510 m) and Parnass (up to 2,457 m) are the continuation of the Pindos Mountains. To the east, the mountains merge into the wide plain of Boeotia. The mountainous landscape on the Attica peninsula and the island of Evia is divided by many valleys.

The former Peloponnese peninsula (21.439 km²) forms the southern part of Greece. This part was separated from the mainland by the Corinth Canal opened in 1893. Central to the Peloponnese is the highlands of Arcadia, a wide coastal plain in the northwest, and several mountains in the northeast. In the south, the Peloponnese is divided into four peninsulas by the Argolic, the Laconic and the Messenian Gulf.

The Ionian Islands, which are located off the west coast of mainland Greece, include Corfu (Kerkyra), Lefkas (Leukas), Ithaca, Kefallinia and Zakynthos. In the Aegean east of the mainland are the Northern and Southern Sporades, the Dodecanese and the Cyclades. The islands of Samothrace, Lesbos, Chios, Samos and Kos lie off the Turkish coast. The largest Greek island is Crete, which is located in the south of Greece, with an area of ​​around 8 261 km² (with a few small side islands).

Greece has a Mediterranean climate with hot, dry summers and wet and cool winters. In Athens the average July temperature is 28 °C (January: 9 °C), in Thessaloniki in the north of the country it is 27 °C (January: 5 °C). The average January temperatures in Crete are around 12 °C. The majority of precipitation falls from October to March, with the amount of precipitation decreasing significantly from west to east (around 1,300 mm in Corfu, around 400 mm in Athens). In areas surrounded by mountain ranges, rainfall can drop below 100 mm annually.

The originally existing forests, with which large parts of Greece were covered, were cut down in antiquity. Macchie took its place with evergreen hardwood plants (strawberry tree, erica, real laurel, carob tree) or the slopes became completely bare due to soil erosion. For today’s vegetation in Greece, the olive trees that grow to a height of around 600 m are typical, as well as pine, Aleppo pine and cypress. Chestnuts, elms and oaks can be found at higher altitudes (around 1,000 m), up to 2,000 m black pines and Apollo firs. Alpine mats spread out above the tree line.

The geckos, lizards (eg emerald lizard) and the Greek tortoise are typical of the animal world of Greece. Deer, wild boar and foxes still live in more remote parts of the country, but there are also said to be wolves and bears. The Bezora goat lives on Crete, a common form of domestic goat.

Greece has a population of around 10.67 million, around 98% of whom are Greeks. The largest minority are the approximately 100,000 Turks who live mainly in Thrace or on the islands off the Turkish coast. Other minorities are Bulgarians, Armenians, Albanians and Roma. About 3 million Greeks live abroad.

Around two thirds of all Greeks live in cities. The metropolitan areas are the greater Athens area (approx.3.23 million residents) and Saloniki (800,000 residents in the greater area) with the surrounding areas. The next largest cities are Piraeus (177,000) and Patras (162,000). Large parts of the mountainous regions are most sparsely populated.

According to COUNTRYAAH, 98% of the Greeks belong to the Greek Orthodox Church, which has been a state church since 1864 and has a significant influence on social and political life in the country.

While birth and death rates are roughly in balance, the 0.4% population growth is mainly due to the return migration of Greeks who lived abroad. The average life expectancy for women is 82 years, for men 77 years. 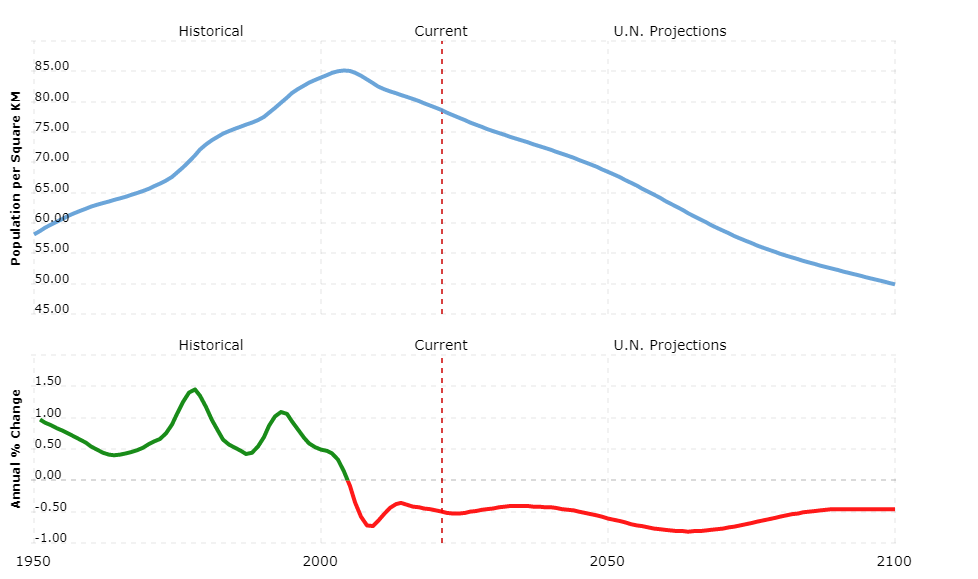 According to the 1975 constitution, Greece is a parliamentary-democratic republic. The head of state and commander-in-chief of the armed forces is the President (Karolos Papoulias since March 2005). He is elected by parliament for a five-year term (one-time re-election is possible) and appoints the head of government (Antonis Samaras since 2012). The head of government recommends the members of the cabinet.

The legislature lies with the Parliament (Voul¨ª ton Ell¨ªnon), whose 300 members are directly elected by the people for four years. When passing laws, the President has a suspensive veto right, which Parliament can reject with an absolute majority. The main political parties are the New Democracy (ND) and the Panhellenic Socialist Movement (PASOK).

Greece is divided into 13 administrative regions, which have had their own competencies since 2011. The monastic republic of Athos on the Halkidiki peninsula in northern Greece has a largely autonomous status, to which only adult men have access.

In autumn 2009 there was a massive debt crisis in Greece. In return for bridging loans from the EU, European Central Bank (ECB) and International Monetary Fund (IMF), extensive reforms were agreed. The Greek economy has been shrinking since 2008. Unemployment is 24 percent, youth unemployment 55 percent.

Almost a quarter of Greece’s land is used for agriculture, both for the population’s own needs and for export (food and beverages account for almost a quarter of the export volume). The main crops are wine, wheat and olives. Whilst olive groves are spread all over the country, the wheat is mainly grown in the basin landscapes of Thessaly, Macedonia, Thrace and Boeotia. The most important wine-growing regions are in the central part of Greece and on the Greek islands. Other crops are cotton, tobacco, sugar beet and fruit (peaches, nectarines, citrus fruits). Livestock farming predominates in the mountainous regions, mainly goats and sheep in the south of the country, cattle in the north, pigs and poultry throughout the country.Due to overfishing and the consequences of pollution, fish stocks in the Mediterranean have decreased significantly,

The service sector generates over three quarters of the gross domestic product (about a fifth of this from tourism, especially in the coastal region and on the islands), the industrial sector a fifth. The industry in Greece is only moderately developed, especially in the food and beverage industry, mostly small and medium-sized companies. Lignite, bauxite and iron ore are of particular importance in mineral resources. Oil deposits have been exploited in the Aegean since 1981. Ores and bauxite are processed further in the country in corresponding factories. The chemical industry and shipbuilding also play a role. The country’s energy requirements are mainly covered by hard coal and lignite and oil, there are no nuclear power plants. The most important industrial center is the greater Athens area, followed by Saloniki and Patras.

The main trading partners are Russia, Turkey, Germany and Italy.