The Republic of Korea in East Asia comprises the southern part of the Korean Peninsula and around 3,500 islands off the coast (around 200 inhabited). The total area of ​​the country is 99 270 km². In the north, South Korea borders the Democratic Republic of Korea for a length of 238 km (North Korea; Korea has been divided since 1945). In the southeast the Korean Strait separates the country from Japan in the Japanese Sea, in the west lies the Yellow Sea. See South Korea country abbreviation.

South Korea is mostly mountainous. The country gradually rises from the highly structured west coast with a 50 to 100 km wide coastal strip before it drops steeply towards the Japanese Sea in the east. The mountains are divided by basin landscapes. The main mountain range is the Taebaek-San Maek, which runs almost parallel to the east coast. The longest of South Korea’s numerous rivers is the Naktong, with a total length of approx. 520 km, which flows into the Korean Strait in the south of the country. The Han River in the northwest flows into the Yellow Sea, other rivers include Kum, Yongsan and Tongjin.

South Korea’s highest peak is Mount Halla-san (1,950 m) on the island of Cheju, which is around 100 km off the south coast of Korea. The capital Seoul is located in the northwest of South Korea.

In the northern part of South Korea, the summers are hot and humid, the winters cold and dry: in the capital Seoul, the mean January values ​​are -4.5 °C, in July 24 °C. The south of the country is characterized by a subtropical climate and has mean summer temperatures of around 26 °C, while the winters are much milder (mean values ​​around 2 °C). The average annual rainfall in Seoul is 1 250 mm, in the south the values ​​are somewhat higher (1 500 mm). There is generally less rainfall on the east coast than in the west of the country. The majority of precipitation falls from April to September.

Over 60% of South Korea’s territory is forested, often secondary forests. In the south there is subtropical vegetation with bamboo, palm trees and laurel, which in the north changes into summer green mixed forest (oak, beech, poplar, maple, elm, aspen). In the high mountains, coniferous forest predominates with spruce and larch trees as typical tree species, in the subalpine area rhododendrons, pines and edelweiss grow among others.

Larger species of mammals such as tigers, leopards, wolves and bears can only be found extremely rarely in South Korea, while lynxes, wild cats and other forest animals are still common. Various types of eagles are common, such as the giant eagle. Numerous water birds live on the coast.

A total of around 48.45 million people live in South Korea, most of them in the coastal plain in the west of the country and about 83% in the cities. The largest city is the capital Seoul, in whose metropolitan area around 23 million people live. Other major cities are Busan (around 3.75 million), Taegu (2.55 million) and Inchon (2.61 million). According to COUNTRYAAH, population growth is 0.4% due to the low birth rate.

The population is very homogeneous: almost all South Korean residents are Koreans; the largest minority are the approximately 20,000 Chinese in the country. Korean is the official language, English and Japanese are used as commercial languages. In contrast to North Korea, almost 80% of South Koreans belong to a religious community: The most common beliefs are Buddhism and Christianity, both of which gather around a quarter of the population as followers.

The standard of living in South Korea is high compared to North Korea, there is a functioning social and health system. The average life expectancy is almost 80 for women and 72 for men. School attendance is compulsory for nine years with free tuition. Over 30 universities are available. 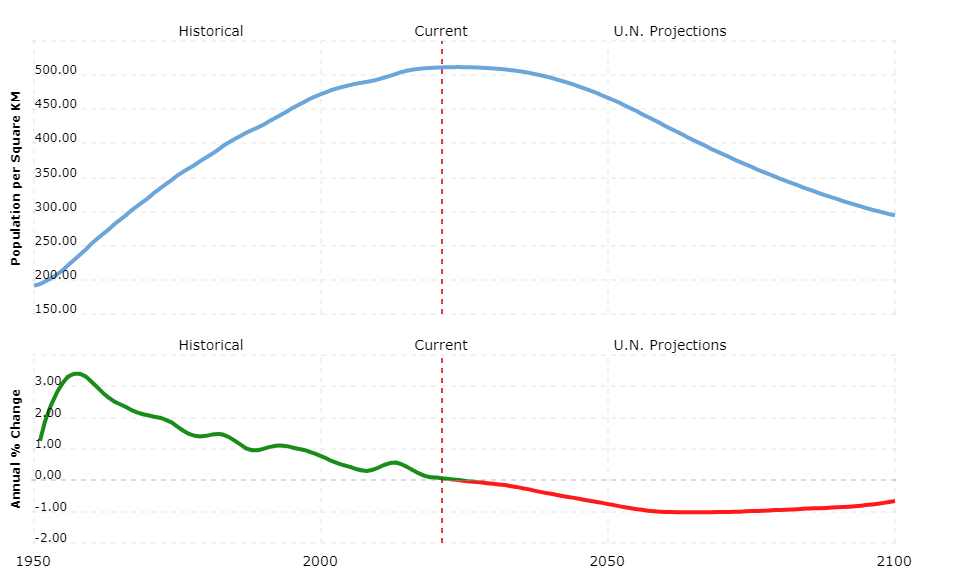 South Korea is a republic with a presidential system based on the 1988 constitution. The head of state is the President (President Park Geun-hye, since February 2013), who is elected by the people for a one-time term of five years. He appoints the members of the Council of Ministers and the Prime Minister as head of government (Chung Hong-won, since February 2013). The President is also the commander-in-chief of the armed forces.

The legislature lies with the National Assembly (Kuk Hoe) with 300 members. 243 of them are elected by the people in one-person constituencies, the rest according to proportional representation for four years.

The Republic of Korea is divided into nine provinces (do) and seven cities (gwangyoksi).

After the end of the Korean War in 1953, the Republic of Korea was an impoverished agricultural state. Today, the country is a modern industrial country and, based on gross national product, the number 15 of the leading trading nations. As a result of the Asian economic crisis at the end of 1997, the economy suffered severe losses and the country had to rely on international aid to escape state bankruptcy. Thanks to the consistent reform policy, however, the international financial and economic crisis of 2008/2009 had no serious effects.

Agriculture now only makes up around 3% of gross domestic product and employs 7% of the workforce. Rice is grown on more than half of the agricultural land, and corn, cereals, millet, legumes and potatoes are also cultivated. The breeding of pigs, chickens and cattle determines animal husbandry, fishing and fish farming play an important role.

South Korea has smaller deposits of hard coal and various ores, and most of the raw materials that are processed by industry have to be imported. South Korea’s industry is one of the most developed in the world and today mainly produces motor vehicles, ships, chemical products and electronics, as well as textiles and clothing. South Korean companies are also world leaders in the computer industry.

The largest buyer of South Korean products is now China, followed by the United States and Japan. When importing (including machinery, petroleum, raw materials, intermediate products such as automotive components), the same countries are the most important trading partners.

Tourism is an important source of foreign exchange in South Korea.

South Korea has a very good transport network that is still being expanded. There are approximately 100,000 km of roads available, of which over 3,000 km are motorways. The rail network covers approximately 3 500 km. The most important ports in the country are Pusan, Ohang and Inchon. The international airport has been located on an island near Incheon near Seoul since 2001.