The Republic of Namibia is located in South West Africa and, with an area of ​​824,292 km², is more than twice the size of Germany. In the west, the country borders on the Atlantic Ocean, in the north on Angola, in the extreme northeast on Zambia (Caprivi tip), in the east on Botswana and in the southeast and south on South Africa. The Namib Desert, which runs along the Atlantic coast, gave the state its name.

The desert strip of the Namib is on the territory of Namibia a flatland strip between 80 and 130 km wide, which is mainly covered with stone and rubble in its northern section. In the middle part, the dunes of the Sand Namib represent some of the highest dunes in the world. The southern section was named Wann namib due to its formations. In the east, the desert is bordered by the steeply rising threshold that forms the transition to the central highlands. The highest peak in Namibia, the Brandberg with 2 610 m, is one of the peaks of this threshold.

The central highlands are on average at an altitude of 1,200 to 2,000 m above sea level. Ovamboland is in the north, Damaraland in the center and Großnamaland in the south. In the east, Namibia has a share in the Kalahari Basin, the largest part of which lies on the territory of neighboring Botswana. The Kalahari Basin is a highland without runoff, with extensive sandy areas and salt pans (Etosha pan).

The inland rivers only carry water after heavy rains, while the Kunene, Okawango, Zambezi and Linyanti, which also mark national borders, carry water all year round.

The capital Windhoek is located in the central inland.

The climate in Namibia is characterized by hot summers, warm winters and little rainfall. In the Namib on the Atlantic, less than 20 mm of precipitation is measured annually, which is mainly due to fog. In the northern area of ​​the central highlands, an average of 550 mm is measured annually, in the south it is approximately 150 mm. Most precipitation falls in the summer half-year (October to March). The average temperatures on the coast are between 18 °C in summer and 12 °C in winter, in the highlands it is approx. 25 °C in summer and 13 °C in winter.

The low rainfall in Namibia means that thorn bush savannah with dwarf shrubs, succulents and grasses dominate large parts of the country. The Namib is almost without vegetation, the Kalahari basin is semi-desert. In the northern highlands there is light dry forest. The most vegetated area is the Caprivi tip in the far northeast of the country with dense forest and swamp areas near the Linyanti.

Around 13% of the state territory is designated as a protected area to preserve the species-rich fauna, the largest park is the Etosha National Park with 22 270 km². Numerous larger mammals such as lions, leopards, cheetahs, antelopes, elephants, giraffes, zebras and Cape buffalos find a suitable habitat here. Rhinos, especially the black rhino, are considered an endangered species. In the species-rich bird life of Namibia, pelicans, flamingos, cormorants and terns occur on the coast. The rare Damara tern is considered an endangered species. In the desert and semi-desert areas, thrush shrike, rock eagle, augur buzzard and Siedelweber live among others. There are also numerous reptiles; snakes include horn vipers, puff moths, cobras and black mambas. In the north of Namibia in humid areas the Nile crocodile and various turtle species like the soft and the flap turtle live. Chameleons and thin-fingered geckos are native to the desert areas.

According to COUNTRYAAH, 2.03 million people live in Namibia, with an average of 2.5 residents per square kilometer, the country is extremely sparsely populated. A little less than a third of the population lives in cities, and the degree of urbanization is significantly higher among the white population. By far the largest city is the capital Windhoek with around 235,000 residents. Other cities are Swakopmund (around 25,000 residents), Rehoboth (21,500) and Rundu (20,000).

The population is made up of different ethnicities, the largest group being the Ovambo, who make up about half of the total population and whose ancestral area (Ovamboland) is in the north of Namibia. Other population groups are the Kavango (9%), Herero, Damara, Nama, Caprivianer and San. Whites make up about 6% of the total population, hybrids almost 6.5%. The official language in Namibia is English, various Bantus languages, Afrikaans, the San language Khoekhoe and German are also spoken. With over 60%, Protestants represent the largest religious community, about 20% of the population are Catholics. Religions of nature are practiced in many ways, sometimes also in combination with Christianity.

In Namibia there is a clear wealth gap between black and white. The official unemployment rate is 35%. Social and health care is concentrated in cities and is inadequate in rural areas. The average life expectancy is only 44 years. About 84% of the Namibians can read and write; there is general compulsory schooling for 7 to 16 year olds. A fifth of the Namibian population is now infected with the HI virus. The population growth is therefore comparatively low 1.3%. 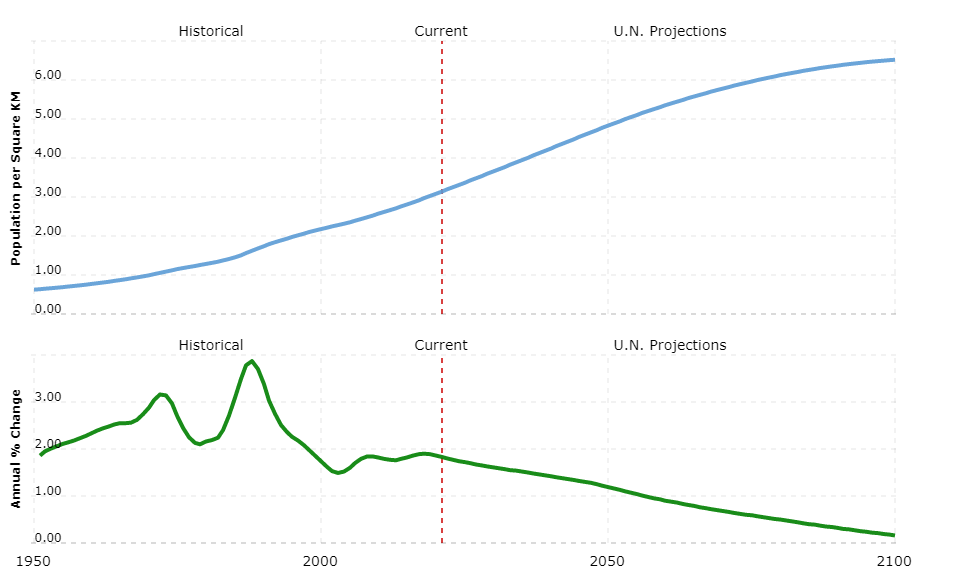 Namibia is a presidential republic that has only been independent since 1990. According to the constitution of March 1990, the president (since March 2005 Hifikepunye Pohamba) is directly elected for five years (one-time re-election possible). He appoints the cabinet, which is headed by the Prime Minister (Hage Geingob since December 2012).

The legislature lies with the parliament, which consists of two chambers: the national assembly has 72 seats, the deputies are elected by the people for a term of five years according to the proportional representation system, six of the deputies are appointed by the president and have no voting rights. The National Council, with its advisory function, has 26 members with a term of six years, two each representing one of the country’s 13 regions.

The country is divided into 13 regions.

Namibia belongs to the group of “middle-income countries”. However, wealth is very unevenly distributed: around half of the population lives below the poverty line; unemployment is 27%.

An important area is agriculture, which is the basis of life for more than half of the population. On more than 40% of the usable agricultural area, “commercial” farms are mainly used for export-oriented livestock farming (mainly cattle and sheep), the rest are farmed in subsistence farming. Due to the climatic conditions, only around one percent of the country’s area is available for agriculture, mainly corn, cereals, sunflowers and peanuts are grown. Due to the cold Benguealstrom, the waters off the Namibian coast are rich in fish, the fishing industry is considered a beacon of hope, despite sometimes greatly reduced fish stocks for economically important species such as sardines and hake. Agricultural goods (especially cattle,Meat and skins) account for around 30% of exports.

The processing industry in Namibia is only moderately developed and focuses on the processing of meat and fish and the production of food and beverages. Small and medium-sized businesses predominate. Around 15% of the workforce is employed here. Mining is an important economic sector, and the country has rich mineral resources. The main products are diamonds and uranium, here Namibia is one of the world’s largest producers. Other mining products are copper, silver, lead, tin, tungsten and vanadium. Diamonds alone generate a third of total export earnings.

The Namibian economy is largely dependent on South Africa, but the country is now also active in trade with the United States and the European Union. Tourism is an important source of foreign exchange income in Namibia, and the trend is rising.

The road network covers a total of around 66,500 km, of which around 5,000 km are paved. Around 2,400 km are available on rails. The most important ports in the country are L¨¹deritz and Walfischbai. The main international airports are in Windhoek and the port city of Walvis Bay.

The currency is the Namibian dollar; however, the South African rand is more important for trade.