The Kingdom of Lesotho is located in the south of the African continent and, with an area of ​​30 355 km², is about the size of Belgium. The country is an enclave in the middle of the Republic of South Africa. See Lesotho country abbreviation.

The majority of Lesotho is occupied by a high plateau, which is an average of 2,000 to 3,000 m above sea level and is crossed by several mountain ranges (Maloti Mountains, Thaba, Putsoa Range, Central Range). To the east, the country rises to the Drakensberg Mountains, which represent the south-eastern section of the large fringe of South Africa. Here is the highest point in the country, the Thabana Ntlenyana at 3,482 m, which is also the highest point in southern Africa.

In the north-west of Lesotho, the river Caledon forms the border with South Africa, here extends a hilly strip of land between 30 and 40 km wide (foreland, “Lowlands”), which is between 1,200 and 2,000 m high and the most important settlement and cultivation area represents the country. The capital Maseru is also located here.

The longest river in Lesotho is the Oranje, which rises in the north-eastern border area and flows through the country for a length of 350 km in a south-westerly direction (total length 2,092 km). The Orange River and its tributaries have cut canyon-like valleys up to 800 m deep into the highlands.

Lesotho has a subtropical climate, which is mitigated by the high altitude. In the capital Maseru in the northwestern foreland, an average of 8 °C is measured in the winter month of July, and an average of 21 °C in January. Temperatures are lower in the highlands, with an average of 17 °C in the summer month of January, and temperatures in winter can drop to -12 °C.

Up to 2,000 mm of precipitation is measured annually on the high plateau, and around 600 to 800 mm in the foreland. Droughts can occur here in summer. Much of the rain falls in the summer months (October to April), often in the form of violent thunderstorms.

The vegetation in Lesotho is characterized by open grasslands and mountain pastures with low shrubs. Peat bogs occur in the highlands. Trees occur only occasionally in the foreland (olive trees), smaller forests (eucalyptus) are the result of afforestation measures.

The wildlife of Lesotho has been greatly reduced by intensive hunting. The fauna is only diverse in the country’s only protected area, the Sehlabathebe National Park in the Drakensberg (6,800 hectares). Larger populations of antelopes, baboons and jackals live here. Larger mammals such as lions or zebras no longer occur.

Around 1.87 million people live in the Kingdom of Lesotho. The population density averages 62 residents per square kilometer, although around three quarters of the country’s area is not habitable. 70% of the total population lives in the foreland, the degree of urbanization is low at around 29%. By far the most populous city is the capital Maseru, in whose metropolitan area around 477,500 people (urban area: around 150,000) live. Other large cities are Teyateyaneng (approx.50,000 residents) and Mafeteng (21,000).

A large part of the population belongs to the South Sotho ethnic group, a Bantu tribe. In addition, approximately 3,000 Europeans and Asians live in the country. Sesotho and English are official languages. Over 90% of the population profess Christianity, of which about 50% are Protestants, almost 40% are Catholics. Followers of natural religions make up about 20% of the population.

According to COUNTRYAAH, population growth is 0.7% due to the extremely high infection rate of the population with AIDS. Estimates assume that around a quarter of the population carries the HI virus. Accordingly, life expectancy is only 35 years on average. Around 85% of the Lesotho population can read and write. 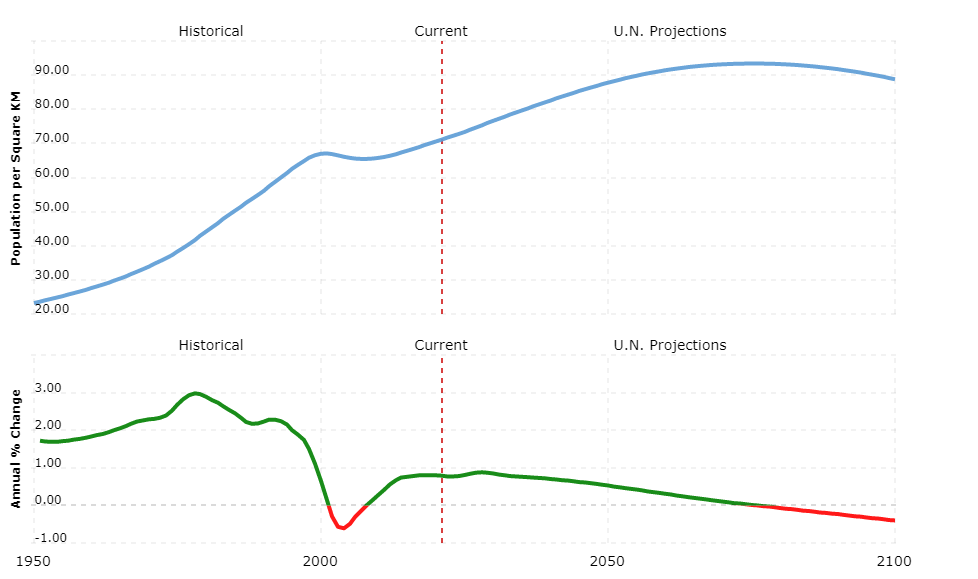 Lesotho is a constitutional monarchy, the constitution dates from 1993. The head of state is the monarch (since March 1996 King Letsie III), who performs predominantly representative tasks. Executive power lies with the Cabinet of Ministers under the leadership of the Prime Minister (Thomas Thabane since June 2012). The prime minister is not elected, but is always the chairman of the majority party in the people’s assembly.

The parliament consists of two chambers: the lower house (National Assembly) with 120 deputies, who are directly elected by the people for five years, and the senate (senate) with a total of 33 members (22 of them tribal chiefs by office and 11 appointed by the king).

Lesotho is divided into ten districts.

Lesotho is largely economically dependent on South Africa, with which there is a monetary union. A large part of the gross domestic product (GDP) comes from remittances from the miners who emigrated to South Africa. High foreign debt, poverty (almost half of the Lesotho population lives below the poverty line) and high unemployment (an estimated 45%) weigh on the country’s economy. Lesotho receives extensive economic aid from abroad.

Around 60% of the workforce is employed in agriculture; however, the sector only generates 7% of GDP. Most farms serve subsistence farming. Less than 10% of the national area is suitable as arable land. Cultivated products include maize, millet, wheat and legumes. Cattle breeding is carried out on the pastures of the high plateau. The population’s need for food cannot be met. An important export good is the high-quality merino and angora wool (from sheep or goats) or the woolen blankets and carpets produced from it in small businesses; The main customers are the USA (95%).

With the exception of diamond deposits, Lesotho is poor in mineral resources. The main drivers of economic growth in Lesotho are the textile sector and diamond mining. The “Lesotho Highlands Water Project” has also made water an economic factor since 1998.

Food, building materials, machinery and vehicles, pharmaceutical products and fuels have to be imported from Hong Kong and Taiwan, as well as from China and Germany.

Since the 1980s, Lesotho has been trying to open up the country to tourism. The focus here is on the Maloti Mountains with a variety of hiking and horse riding opportunities. The Afri-Ski ski area has existed in the east of the Butha Buthe district since 2005.

The foreland in western Lesotho is well developed. Around 1,000 km of a total of 6,000 km of roads are paved. The capital has an international airport.

The national currency Loti is pegged 1: 1 to the South African rand.