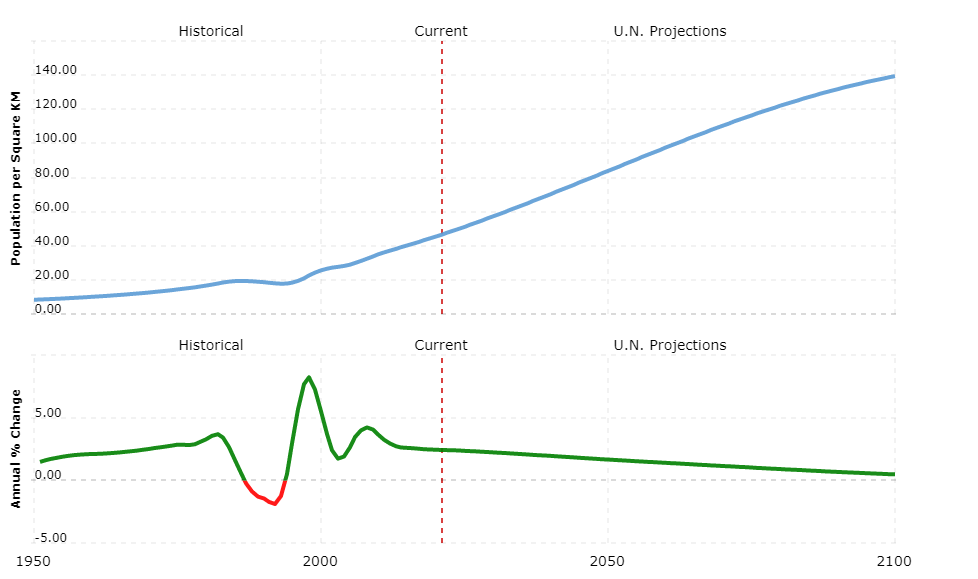 Liberia is located in the tropical part of West Africa and is the oldest republic on the continent. At the same time, alongside Ethiopia, it is the only country in Africa that has never been under European colonial rule. With an area of ​​111,370 km², Liberia is almost a third the size of Germany. Liberia borders the Republic of Ivory Coast in the east, Guinea in the north and Sierra Leone in the northwest.

There are three landscape zones: a low plain that runs along the coast, a hill zone with table land in the center and a low mountain range. These form the Nimba Mountains in the north, where the highest elevation in the country is at 1,384 m. The compensation coast in the north shows a change from steep and flat coast lines, is difficult to access by ship and has a length of around 550 km. The center of the country is divided into three by deep valleys of the rivers Saint Paul and Cestos into a fertile, cultivated western part, a central region and large deserted forest areas in the east.

In the coastal area there is a tropical climate with consistently hot and humid weather. In the northern parts of the country the rainy season is from June to October, while in the northern coastal plain the rainy season in August is interrupted by a dry period. In the extreme south there are two rainy seasons. In the capital Monrovia, the annual rainfall is 5 130 mm, the average temperatures are 26 °C in January and 24 °C in July. Precipitation decreases towards the interior, but increases again in the low mountain ranges in the north. Especially in the interior, the dusty-hot Harmattan wind, a trade wind from the northeast, drives the temperatures up in the dry season from October to March.

The evergreen rainforest is typical of Liberia’s vegetation. In particular, teak and mahogany woods are particularly valuable tree species. Only in places where less than 2,000 mm of precipitation falls annually are the forests partially deciduous. In the far north of the country there are wet savannas, the coasts are partially covered by mangrove swamps.

A variety of different animals can be found in the country’s rainforests, such as chimpanzees, antelopes and anteaters, as well as dwarf hippos. But also bush oxen and elephants as well as the rare leopards are at home here, as well as a variety of poisonous snake species, bats and birds as well as scorpions and lizards. The reptile species are particularly numerous, including crocodiles. The coastal seas and the numerous rivers are also home to a variety of fish and shellfish.

The tsetse fly is a problem as a carrier of sleeping sickness. Since this leads to death if left untreated, livestock farming is only possible to a limited extent.

According to COUNTRYAAH, 3.48 million residents, about a quarter of whom live in the metropolitan area of ​​the capital Monrovia, live in Liberia. The descendants of the slaves from America who once founded the country make up only a few percent of the population, but they continue to shape social and social life in the state as an elite and upper class. There are also 16 main and numerous smaller tribes; the largest ethnic groups are the Kpelle (just under a fifth of the population), Bassa, Grebo, Gio and Kru.

The civil war had drastic ramifications for Liberia’s social fabric. More than three quarters of the population have had to flee their home region in the past ten years and have since lived either in neighboring countries or in other regions of the country. Half a million Liberians are still in refugee camps in the country itself.

10% of the population are Christians, around 70% are followers of natural religions, 20% are Muslims. In addition to English, the official national language, which speaks only about a fifth of the population, more than a dozen different native languages ​​are spoken, including Kpelle and Bassa.

Life expectancy in Liberia is very low at 48 years of age due to the catastrophic medical care and the high HIV infection rate (official estimate in 2003 was almost 6%; more recent data are not available, estimates by local doctors are significantly higher). Population growth is still high at just under 4%. Almost two thirds of men, but only 42% of women in Liberia can read and write.

According to the constitution that came into force in 1986, Liberia is a presidential republic. The president, elected directly by the people for six years, is also head of state, commander-in-chief of the armed forces and head of government of the executive. He appoints his cabinet with the approval of the Senate. Ellen Johnson-Sirleaf has been the first elected female head of state in Africa since January 2006.

A two-chamber system forms the legislature. It consists on the one hand of the Senate with 30 members and a term of office of nine years, on the other hand of a House of Representatives that has 73 members who are elected by the people for six years.

Liberia is divided into 15 districts.

Liberia has good basic economic conditions as it has high-quality iron ore deposits and numerous other raw materials. In addition, fertile soils, fish-rich coastal waters, a stable climate and the presence of precious tropical woods in the rainforests represent rich natural resources. However, the foundations for a successful economy were largely destroyed in the civil war. Unemployment is 85%; around 64% of the population live below the poverty line.

Most Liberians practice agriculture (cultivation of cassava and rice in chopping) as subsistence production. Nevertheless, food has to be imported. The plantations in the cleared central part of the country, which are mostly foreign-owned, are managed effectively and success-oriented. Rubber is the country’s most important export product. In addition to rubber, cocoa and coffee are also grown for export.

The iron ore export, which was important before the civil war, is growing again. But precious woods, gold and diamonds are again exported to South Korea, China, Japan and Germany. The most important imports are machinery, vehicles, food and fuel from South Africa, the USA and Spain. Numerous tankers and merchant ships from foreign shipowners sail under the Liberian flag due to the favorable conditions.

The country’s main port is Monrovia, which has a free port. Liberia International Airport is also near the capital in Robertsfield.

The currency is the Liberian dollar.