The Kingdom of Denmark (Norwegian: Kongeriget Danmark) is located in Northern Europe and is the southernmost of the Scandinavian countries. With an area of ​​43 098 km², the country is slightly larger than Switzerland. It consists of the Jutland peninsula and 474 islands, of which around 80 were inhabited in 1998. The largest islands are (in order of their size) Zealand with the capital Copenhagen,Funen, Lolland, a little out of the way in the western Baltic Sea Bornholm, Falster, Alsen, Langeland and Møn. See Denmark country abbreviation.

A single mainland border connects Denmark with another country – the German state of Schleswig-Holstein. The rest of the country – with around 7,000 km of coastline – is surrounded by water. In the west, dunes, sandbars and lagoon protect against wintry North Sea storms, in the northwest there is the Skagerrak as a connection to Norway and Sweden. The strait of the Kattegat connects the North Sea and the Baltic Sea, and the Baltic Sea lies off the east coast of Denmark. Four types of coast can be distinguished: compensation coasts with dunes on the Wadden and Marsh coast in the west, chalk-lime coasts on Møn, fjord coast on the east coast of Jutland and, as a special feature, gneiss and granite coasts on Bornholm.

Geomorphologically, Denmark is the continuation of the North German Plain. The last ice age left Geest Islands and leveled moraine. For example, East and West Jutland are separated from each other by such a moraine belt.

Denmark is a very flat country, the average altitude is 30 m above sea level. The highest elevation in Denmark is the 173 m high Yding Skovhoy, which is located in eastern Central Jutland. The longest river has a length of 158 km and is called Gudenå, the largest lake is the Arresee on Zealand with an area of ​​42 km². Typical of the Danish landscape are the so-called lagoon, which are largely separated from the open sea by a spit and mostly have fresh water supply. The largest lagoon, Limfjorden, runs through Jutland over a length of around 180 km.

Greenland (capital Nuuk) and the archipelago of the Faroe Islands (capital Torshavn) belong to the Kingdom of Denmark as external possessions with self-government. Greenland (Green Land) is located near the North American mainland between the North Atlantic and the Arctic Ocean. Cape Farvel, the southern tip of Greenland, is on the same latitude as Oslo, Cape Morris Jesup in the far north of the island is only 740 km from the North Pole, making it the world’s northernmost land area.

With almost 2.2 million km², Greenland – not counting the continent of Australia – is the largest island in the world. The island’s inland ice covers an area of ​​approximately 1.8 million km² and forms the second largest ice sheet in the world, in some places up to 3,400 m thick. Glaciers flow into the sea, particularly on the west side of the island. The country has an up to 150 km wide ice-free coastline with high edge mountains, which rises to a height of 3 700 m (Gunnbjørns Fjeld).

The Faroe Islands (Sheep Islands) are also in the Atlantic halfway between Denmark and Greenland, north of Scotland near the Shetland Islands. 17 of the 25 mountainous and rugged rocky islands are inhabited. The largest of these is Streymoy (Danish: Strømø) with the capital Torshavn.

Denmark has a moderately mild maritime climate. The reason for this is the location between the seas and the Gulf Stream. Warm and rainy summers alternate with mild winters. The average temperatures in Copenhagen are 0 °C in January and 18 °C in July. The annual rainfall in the capital is about 570 mm. Rainfall is highest in West Jutland with up to 750 mm, and lowest in the island area with up to 450 mm.

The climate in Greenland is arctic-polar in the north of the inland ice. Temperatures in January do not rise above -30 °C, in summer they average 0 °C. In southern Greenland, the climate is subarctic (average around -9 °C in February, around 7 °C in July). In contrast, the Faroe Islands have a mild and humid climate, which leads to the frequent formation of fog.

Denmark belongs to the region of the Central European deciduous forest, but it already borders the vegetation zone of the boreal coniferous forest, a forest belt that connects to the Arctic in the northern hemisphere. The majority of the mainland is made up of arable land, pastures and meadows that are used for agriculture. Forests that once covered two thirds of the country’s area still make up about 12% today. The most common trees are beeches, which are mainly found in East Jutland and the islands, oak, birch and ash also occur. On the North Sea coast, afforestation measures are used to protect the wind. About another 5% take up dunes, heath areas, raised bogs and lakes.

Apart from red deer, there are hardly any wild animals in the few remaining natural forest areas. There are a few red foxes, rabbits and squirrels, very rarely pine martens. Many species have been deprived of their habitats by draining large wetlands for agricultural use. The bird world, on the other hand, is very diverse. Two thirds of the Danish territory consists of water areas. Around 1,500 different animal species live in the North Sea, with its almost oceanic water and high salt content, and significantly fewer in the Baltic Sea. Jellyfish and water fleas are just as much a part of the marine life as bottlenose dolphins, cod, cod, herring and plaice. Cockles and sandworms, mussels, crabs and starfish live on the sea floor.

Domestic animals are arctic rabbits, reindeer and blue and white foxes. Musk ox and lemmings appear in the north. The coastal waters are home to seals and numerous species of fish. The coasts of the Faroe Islands are highly structured. Due to the high humidity, they are covered with heaths, bogs and meadows. Due to the constant strong wind, there are only a few trees on the island. But the bird species are numerous. Ornithologists number around 300, many of them – such as puffins and petrels – nest in the rocky cliffs of the island.

According to COUNTRYAAH, 5.53 million people live in Denmark, the population density is about 128 people per km². The country is culturally and ethnically very uniform: Around 94% of the population are Danes, the majority of them (around 81% in total) belong to the Evangelical Lutheran Church. The majority of the approximately 200,000 foreigners come from Scandinavia or EU countries. Over a third of the total population lives in the region around the capital Copenhagen (with 1.79 million residents in the metropolitan area), the second largest city of Aarhus is already considerably smaller with 657,500 residents (agglomeration).

Greenland has a population of around 56,000, of whom about three quarters are Eskimo or Eskimo ancestors. The rest of the population consists mainly of Danes, with this proportion declining. About 70% of Greenlanders live on the west coast in the area around Disko Bay and in the central region. The capital Nuuk has around 15,900 residents. Inuktitut (Greenlandic Eskimo) is spoken in addition to the official language Danish. Around 48,600 people live in the Faroe Islands. After the population tripled in the course of the 19th century to almost 50,000 in the course of the 19th century, it has since declined again. The Faroese also have their own language (Faroese), but Danish is taught in all schools.In Denmark, the population grows by 0.4% annually. 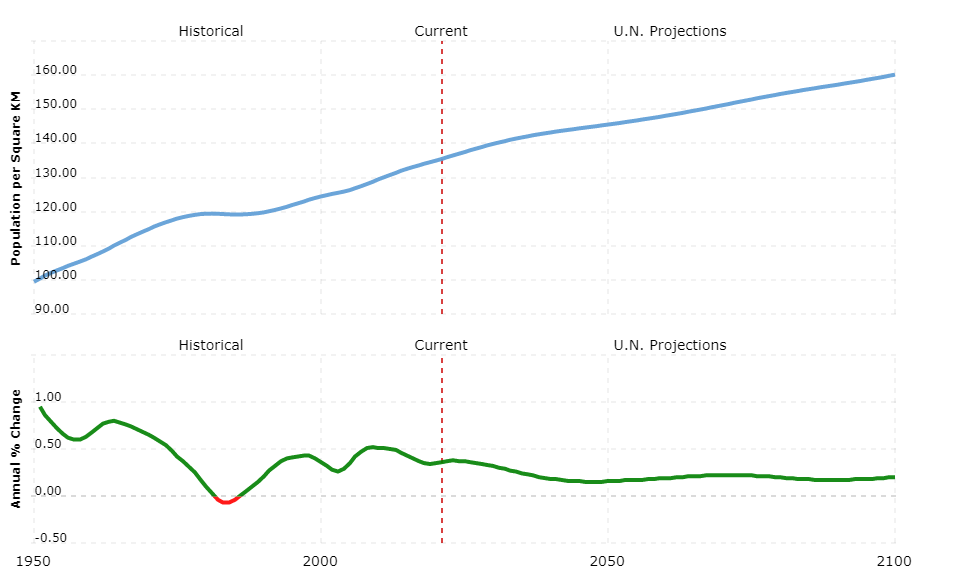 According to the constitution of 1953, Denmark is a parliamentary monarchy with a king or queen as head of state (Queen Margrethe II since 1972). The monarch formally appoints a cabinet chaired by the Prime Minister (Prime Minister Helle Thorning-Schmidt since September 2011). This is the responsibility of the unicameral parliament (folketing).

Denmark is divided into five regions with a total of 98 municipalities. Greenland has its own state parliament (Landsting), which is legally independent except for the following areas: foreign policy, administration of Greenland’s natural resources, police and law. The highest representative of the Danish imperial authorities in Greenland is the Imperial Ombudsman. A similar system applies to the Faroe Islands: on the one hand, the islands in the Atlantic are part of the Danish Kingdom, on the other hand, the islands manage themselves with the exception of defense and foreign policy.

Denmark is one of the most highly developed industrial countries in the world with a very high standard of living and little social difference. As a member of the EU and due to its proximity to Germany, the country is economically strongly oriented to the south. A traditional counterpoint to this is the close economic cooperation with the Scandinavian neighboring countries Sweden, Norway, Finland and Iceland, with which there is also a passport union.

The temperate, humid climate favors extremely effective agriculture. Almost three quarters of the country’s land is used as meadows, pastures and arable land for agriculture – and mostly with the help of the latest technology. The substantial surplus of (beef) meat, milk and eggs as well as fish from the North Sea is exported. Denmark has one of the most important fishing fleets in Europe.

In addition to agricultural products, beer, pharmaceuticals, furniture, ships and goods from the metal industry are the most important export goods. Thanks to its excellent transport structure, the country is also an important hub between the EU and Scandinavia on water, on the road and in the air. Germany is the most important foreign trade partner for both imports and exports, followed by Sweden.

With the exception of lime and oil, there are only a few raw materials. The oil reserves cover their own needs and supply surpluses. A low inflation rate and unemployment rate, the high standard of training for employees and a strong high-tech production sector will continue to ensure economic stability for the country in the future.

In Greenland, a large number of people continue to work directly or indirectly in the fisheries sector. Cod, halibut and seal fishing play a central role, and there are sometimes factories for the industrial processing of the caught fish. In addition, sheep breeding and mining are economically profitable, since 1973 lead-zinc ores have been mined at Maarmorilik. Kangelussuaq is an important airfield for the polar route, the main port of the island is in the capital Nuuk.

In the Faroe Islands, declining fishing yields caused major economic problems in the 1990s, but fishing for cod and herring continues to be an important source of income. Sheep farming also has lost importance. Oil deposits are suspected to be near the islands. The currency is the crown (= 100 ore).