The Republic of Djibouti (Arabic: Djumhurijja Djibuti, French: R¨¦publique de Djibouti) lies on the Gulf of Tadjourah, which is at the extreme western end of the Gulf of Aden. The north-east African country at the exit of the Red Sea has neighbors in southeast Somalia,Ethiopia in the south and west and Eritrea in the northwest. Despite the small area of ​​23,100 km² – which corresponds to the size of the German state of Hesse – the nature of Djibouti is varied.

Two major landscapes can be distinguished. On the one hand, the mountains in the north of the country, which reach a height of up to 1,775 m, and on the other, desert and semi-desert plains, which are crossed by volcanic plateaus in the west and south. The highest mountain in the country is the Musa Ali with 2 010 m near the border with Ethiopia and Eritrea. The lowest landing point – and thus the lowest in all of Africa – is the saline Assalsee in the center of the country, which is 157 m below sea level. Further deep sinks with salt lakes run parallel to the Red Sea. The country has no rivers that carry water all year round.

Djibouti has a tropical-dry climate, which is influenced by a dusty and sandy desert wind, the Khamsin (Arabic “fifty” because it usually occurs fifty days after the spring equinox). The temperatures in the capital of the same name,Djibouti, average 25 °C in January and 36 °C in July. From October to April the temperatures are slightly lower. In summer, however, maximum temperatures of over 55 °C can be reached, especially in the Tadjoura basin, one of the hottest areas on earth. The annual rainfall is 131 mm, with rain falling on average only 19 days a year.

Djibouti’s flora and fauna is also characterized by the sparse rainfall. The flora is particularly restricted. It has only a few plants typical of semi-deserts, such as desert shrubs. Mangroves grow on the coast and there are small forest areas in the mountain region.

Typical animals are antelopes, gazelles, hyenas, jackals and ostriches. In contrast to the land, the seas off the coast are very diverse. In addition to many other types of fish, there are tunas and especially barracudas, which are also called arrow pike.

Although both Issa and Afar speak Kushite dialects, Djibouti residents cannot communicate with each other unless they speak the other dialect. The Arabic and French languages ​​serve as a bridge between the ethnic groups.

The vast majority of the population belongs to the Sunni Muslim faith, about 6% are Christians.

Life expectancy in Djibouti is only 43 years; the population grows by an average of 1.8%. According to COUNTRYAAH, 68% of the population can read and write. 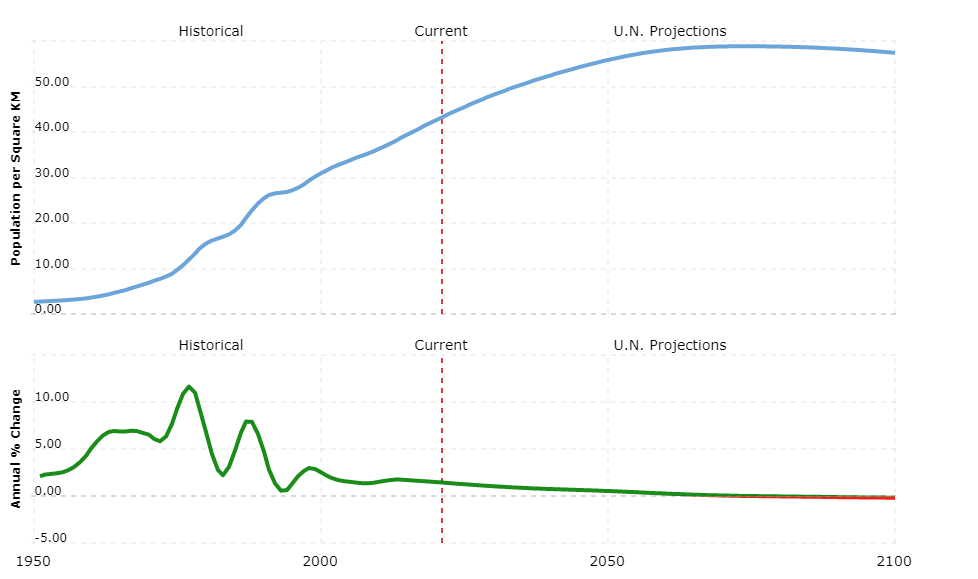 Djibouti has been a presidential multi-party democracy since a referendum in 1992, but the first multi-party election did not take place until 2003. The head of state with considerable powers is the president of the country, who is directly elected by the people for five years (Ismale Omar Guelleh, since May 1999). Together with the cabinet, which is chaired by a prime minister (Abdulkader Kamil Mohamed, since April 2013), the president exercises executive power in the country.

The legislative body is the National Assembly, which has 65 members who are elected for a five-year term.

Djibouti is divided into five regions and the capital.

4% of the country’s gross domestic product is generated in agriculture, 16% in industry and the vast majority in services. The very high proportion of the service sector can be explained by the fact that the only direct railway line from Djibouti runs to neighboring Addis Ababa in Ethiopia. The international deep sea port in Djibouti City will thus become an important transit port for Ethiopian goods. The container port in Doraleh was inaugurated in 2009, the largest and most modern of its kind in East Africa. A stable currency and a relatively calm domestic political situation have also prompted numerous banks and financial institutions to settle in the country.

Due to the climate and soil conditions, only about 2% of the country’s area is suitable for growing crops. The cultivation primarily serves the population’s own needs. A little over 10% of the area can be used as pasture with restrictions. In contrast, fishing is successful in the species-rich waters of the sea. In addition, companies on the coast are working on the extraction of sea salt.

An international airport is located in Djibouti city.

The currency is the Djibouti franc.