The north of the Central African Republic shares in the Chad basin, the southern part of the country, a tropical lowland strip, belongs to the Congo basin. These two basin landscapes are separated by the Asand threshold (also: Northern Equatorial Threshold), a hilly area around 500 to 1,000 m high. The Asanda threshold runs through the Central African Republic in an east-west direction and takes up most of the country’s area. Numerous rivers originate here, the longest is the Ubangi, a tributary of the Congo, which flows through the country for a length of around 1,300 km. The Asanda threshold forms the watershed between the Chad and Congo basins.

The highest elevation in the country, the Kayagangiri (1,420 m), is located in the northwest of the country in the border area with Cameroon (foothills of the Adamapua highlands). The capital Bangui is in the south on the banks of the Ubangi, which also forms the border with the Democratic Republic of the Congo.

Most of the Central African Republic is in the area of ​​alternatingly humid tropics with consistently high temperatures all year round. There is a rainy season that lasts from May to November. The northern part of the country has higher temperatures (between 22 and 30 °C all year round) and there is a pronounced dry season. The rainfall here averages 760 mm. In the southern part of the country, which already belongs to the climatic zone of the always humid tropics, the temperatures are somewhat lower (between 24 °C and 28 °C) and the amounts of precipitation are higher (up to 1,800 mm annually). The humidity is high.

Due to the extremely thin population of the country, a large part of the animals’ habitats is largely untouched. Monkeys, antelopes, elephants, rhinos, hyenas, crocodiles and hippos live in the country. The mountain gorillas, which are threatened with extinction, live in the rainforests in the south of the country. Three protected areas for flora and fauna have been established.

Only around 3.79 million people live in the Central African Republic. With an average of six residents per square kilometer, the country is extremely sparsely populated. Almost 42% of the population live in cities, the largest city is Bangui with around 733,000 residents. According to COUNTRYAAH, the next largest cities are Carnot with 66,500 and Berb¨¦rati with 63,000 residents. The west of the Central African Republic is very densely populated, while large areas in the east are deserted.

The majority of the people belong to the Ubangi groups, including Baja (33% of the total population), Banda (26%), Mandija (12%), Mboum (7%) and Mbaka (4%). Bantu-speaking peoples, Europeans (mostly French) and pygmies form minorities.

The official language in the Central African Republic is French, the national language Sangho, and Banda and Fulfulde are also spoken. Over half of the population is committed to Christianity, about a quarter practices natural religions, and followers of Islam make up around 15% of the population.

The population growth rate in the Central African Republic is 1.7%. Medical care for the population is poor, tropical diseases are widespread, and at least 13% of the population are infected with the immunodeficiency disease HIV / AIDS. Infant mortality is 9.1%. Central Africans live on average only 43 years. Despite the existing compulsory schooling for children between the ages of six and 14, only around half of all children are enrolled in school, so the literacy rate is 51%. 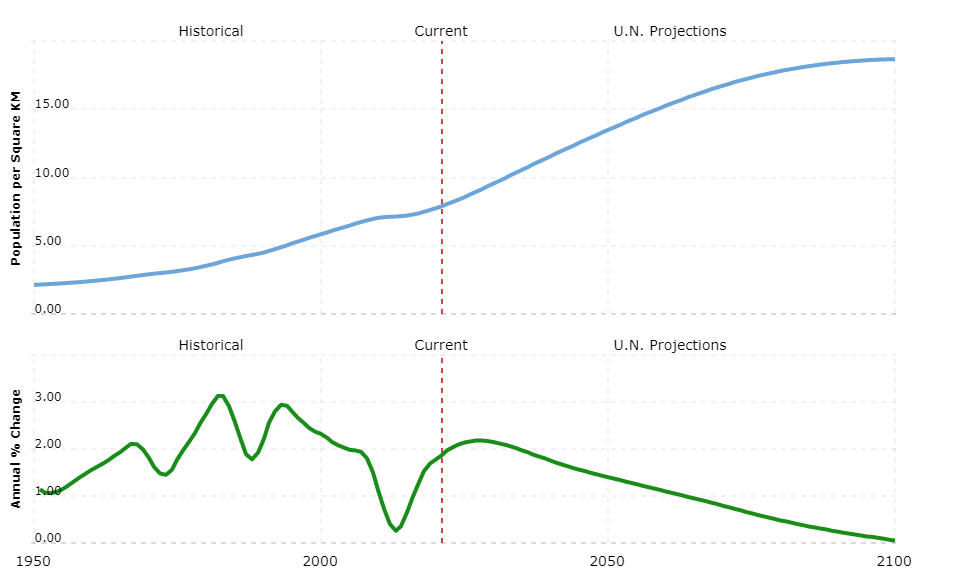 A government of national unity has ruled since the coup in March 2013. The interim head of state has been Catherine Samba-Panza since January 2014. The Prime Minister has been Faustin-Mahamat Kamoun since August 2014.

A National Transitional Council has acted as a parliament since 2013.

The legal system is based on French law.

The country is divided into 16 prefectures and the capital with special status.

The inland is one of the poorest African countries and highly dependent on foreign funding. The income distribution is extremely uneven, many people live in extreme poverty. Since the beginning of the democratization process in the first half of the 1990s, the country has had stable growth rates, but has repeatedly experienced stagnation and, in part, depression due to the flaring up of conflicts.

The backbone of the Central African Republic’s economy is agriculture and forestry. A little more than half of the gross domestic product (GDP) is generated here, around 70% of the workforce is employed in this sector. Coffee, cotton and tobacco are mainly grown for export. To cover their own needs, manioc, yam, millet, corn and bananas are cultivated. Tropical woods are widely exported.

The industry is only moderately developed and generates 14% of GDP. Wood and food processing companies dominate, textiles, shoes, bicycles and motorcycles are also produced. The Central African Republic has deposits of gold, diamonds, uranium, copper and zinc. The diamond deposits in particular are exploited.

The infrastructure in the Central African Republic is only moderately developed. A total of around 24,000 km of roads are available, of which approximately 640 km are paved. Around 2,800 km of the waterways are navigable, here the Ubangi plays an important role, connecting the ports of the neighboring country of the Republic of the Congo. There is no rail network. There is an international airport near the capital Bangui.