Chad is a landlocked country in northern Africa and, with an area of ​​1,284,000 km², is the fifth largest country on the African continent and about three and a half times the size of Germany. The country stretches from the central Sahara in the north over the Sahel region to tropical areas in the south (north-south extension 1 750 km). Chad borders Libya in the north, Sudan in the east, the Central African Republic and Cameroon in the south, Nigeria and Niger in the west. See Chad country abbreviation.

In the north of the country lies the Tibesti Mountains with the highest elevation in the country, the Emi Koussi with 3,415 m (at the same time the highest mountain in the Sahara). In the northeast is the Ennedi Mountains, which reach heights of up to 1,450 m and are part of the Ouadaïschwelle, which runs from north to south. The western and central parts of the country belong to the Chad Basin, which lies at an altitude of 200 to 500 m.

In the west of the country is Lake Chad, the area of ​​which varies between 10,000 and 25,000 km² depending on the water level. Around half of the lake belongs to the state territory of Chad, the neighboring countries of Niger, Cameroon and Nigeria also have a share. Due to the droughts of the past decades, the water level of the lake is constantly falling. Significant rivers in the country are the Logone and the Chari, which flow from the south to Lake Chad. The floodplains of the rivers represent important cultivation areas. The capital N’Djamena is located in the southwest on the border with Cameroon.

The country’s climate is characterized by high temperatures and low rainfall. In the north of the country there is a desert climate with annual rainfall of less than 50 mm (an exception is the Tibesti Mountains, where precipitation can fall up to 1,000 mm), in the southern part of the country a maximum of 1,000 mm is reached. Most precipitation falls here from May to September. The average January temperatures in the capital N’Djamena are 24 °C, in July 28 °C, the hottest month is April with an average of 32 °C. In the north, the July average is 34 °C.

The northern parts of Chad are full deserts, to the south follow semi-deserts, thorn and dry shrub savannah (Sahel), wet or flood savannah (papyrus, reeds) to rain-green dry forests in the extreme south. Persistent droughts and overgrazing and lowering of the groundwater level (through the creation of deeper and deeper wells) cause the Sahel region to shrink as the desert expands further and further south (desertification).

The desert fox (Fennek) and the spotted hyena live in the north, especially in the rainier areas of the Tibesti Mountains. Cheetahs, antelopes, gazelles, baboons, lions, elephants, buffaloes, rhinos and giraffes are found in the savannah areas. Hippos and crocodiles live along the rivers and in the floodplains.

In total, around 9.25 million people from over 200 different ethnic groups live in Chad. Largest groups of the population are the Sara (approx. 28%) mainly in the south of the country and Sudan Arabs (12%). Other people include the Boulala, Hadjerai, Dadjo and Kanembu. Minorities are the Tubu, a part of which lives in the Tibesti Mountains as semi-nomads (Tebe), the Fulbe and the Haussa. Overall, around 6% of the total population are nomads.

According to COUNTRYAAH, the population density is around seven residents per square kilometer, two thirds of the people live in the south of the country, around a quarter in cities. The largest city is the capital N’Djamena with about 750,000 residents, followed by Moundu (145,000) and Sarh (108,000).

Slightly more than half of the population belongs to Islam, around a third to the Christian faith. Natural religions are widespread.

The official languages ​​in the country are French and Arabic. In addition, more than 100 other languages ​​and dialects are spoken.

Chad is one of the poorest countries in Africa, and social and health services are poorly trained. Civil war and prolonged droughts mean that a large part of the population lives in poverty (80% live below the poverty line). Life expectancy averages 48 years, almost half of the people are younger than 15 years. The high birth rate – despite the infant mortality rate of 9.5% – leads to population growth of over 2.9%. School attendance is compulsory for children between the ages of six and twelve, but the literacy rate is only 47.5%. 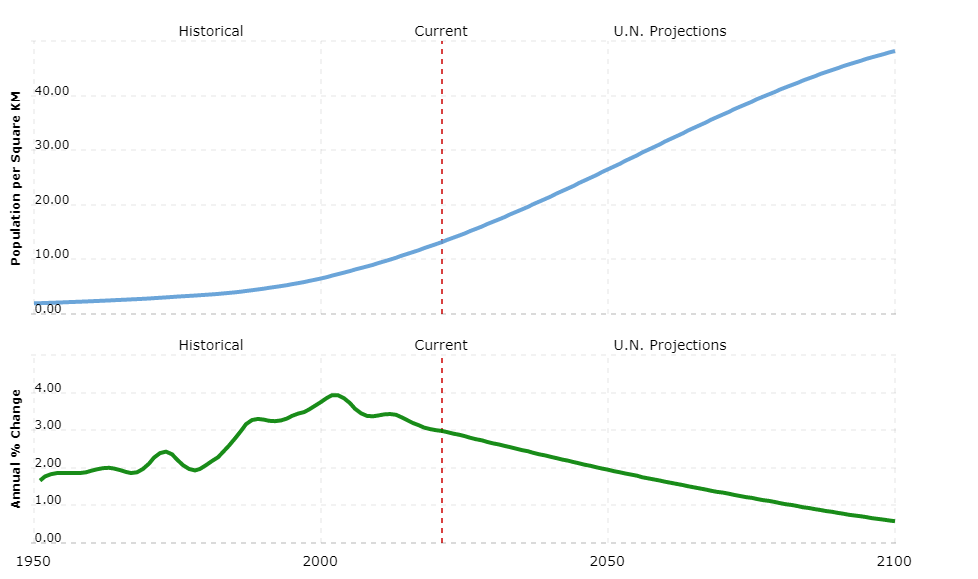 Chad is a presidential republic under the 1996 constitution. The head of state is the President (Idriss D¨¦by since 1990), who is elected by the people for a term of five years. He appoints the Prime Minister to head the government (Djimrangar Dadnadji since January 2013).

The legislature consists of one chamber, the National Assembly, whose 188 members are elected by the people for a four-year term. The dominant political force is the Presidential Patriotic Welfare Movement (MPS).

The Republic of Chad is divided into 22 regions. The legal system is based on French law, Islamic Sharia law and traditional tribal jurisdiction.

The Republic of Chad is one of the poorest countries in the world. 80% of the population live below the poverty line. Long periods of drought, civil wars as well as corruption and mismanagement stagnated the country’s only moderately developed economy, which is not viable without international financial aid. In 2000, the World Bank again approved approximately $ 200 million for the construction of a pipeline. Petroleum exports, which started in 2003, brought enormous economic growth. However, despite the World Bank’s efforts to distribute revenue fairly, poverty was not reduced.

In addition to the oil, there are uranium, bauxite and gold deposits in the Tibesti Mountains in the north of the country, which have not yet been mined. Soda is extracted from Lake Chad. The industry is barely developed and is limited to small businesses that produce food, textiles and tobacco. Overall, however, thanks to oil, industry has a large and increasing share of gross domestic product (GDP).

Around three quarters of all employed people work in agriculture. For their own use, millet, rice, manioc, beans, rice, potatoes and sugar cane are mainly grown, mainly in the south of the country in hiking fields or in permanent field cultivation. The cultivation of cotton and peanuts is important for export. Livestock farming predominates in the northern part of the country, with overgrazing and the creation of ever deeper wells (lowering of the water table) further the process of desertification. Fishing in Lake Chad and in the country’s rivers makes a significant contribution to covering the population’s own needs. Nevertheless, food must be imported additionally.The country’s most important agricultural export is cotton, and peanuts and cattle are also exported.

The infrastructure in Chad is poorly developed. Only around 1% of the approximately 33,000 km of roads are paved, and most of the roads in the south of the country cannot be used during the flooding period. An international airport is located near the capital, N’Djamena.