Two thirds of Cambodia’s territory is occupied by the central lowlands, which are defined by the Tonle Sab Basin in the west and the alluvial plain of the Mekong in the east. The Great Lake (Tonle Sab) is the largest inland water in Southeast Asia, it is around 2,500 km² in the dry season, during the rainy season the area is increased by up to 20 by the backwater of the Mekong, which flows into the lake against the direction of the river 000 km². The connection between the Great Lake and the Mekong is formed by the Tonle Sab River.

The lowlands are surrounded by mountain ranges and plateaus: in the west and southwest is the Cardamom Mountains (Chuor Thnum Kravanh) with peaks over 1,700 m. In the north is the Dankrek chain (Khao Phanom Donkrak), a sandstone mountain range with heights of up to 800 m. The highest elevation in the country at 1,813 m is the Phnom Aural east of the Cardamom Mountains. South of this peak is the Elephant Mountains (Chuor Phnum Damrei), which have heights of up to 1,100 m. The foothills of the Annamite Coast Cordillera rise in eastern Cambodia.

The country’s most important river is the Mekong, which rises in the highlands of Tibet and flows into the South China Sea. With a total length of 4,200 km, the Mekong is the longest river in Southeast Asia, and around 500 km flow through Cambodian territory.

The capital, Phnom Penh, reads at the mouth of the Tonle Sab River in the Mekong.

Cambodia has a tropical monsoon climate with high temperatures all year round and a pronounced rainy season. From May to October the southwest monsoon brings in humid air masses, on the coasts and on the western slopes of the Elephant Mountains fall up to over 5,000 mm annually, in the interior between 1,300 and 2,000 mm. The rather dry northeast monsoon blows from November to March. The average temperature in the capital Phnom Penh is around 26 °C in January and 28 °C in July. The hottest month is April with averages around 30 °C.

Almost 60% of the country is covered by forests. On the rainy western slopes of the mountains there is tropical rainforest with palm trees, which changes into an evergreen mountain forest from a height of around 700 m. The central lowlands are dominated by monsoon and deciduous dry forests, large parts are occupied by swamps (floodplains) and savannas. Extensive mangrove forests can be found on the coast.

A large number of animal species live in the dense forests of Cambodia. Indian elephants, tigers, leopards and various bear species can be found in remote areas. A specialty of the country’s wildlife is the Kouprey, a wild cattle with a withers height of almost 2 m. The bird and reptile world is particularly rich in species; In addition to the king cobra, which is up to 5 m long, there is also the highly toxic krait, which is one of the snakes. Angkor National Park (107 km²) in the north of Lake Tonle Sab is home to a number of rare animal species such as the Muntjak deer, which only reaches a height at the withers of 65 cm.

A total of around 13.61 million people live in Cambodia. Over 90% belong to the Khmer ethnic group. The largest ethnic minority with a share of around 5% of the total population are Vietnamese, followed by Chinese with around 1%. Members of the Cham, who belong to the Malay peoples, live in the coastal area and on the lower reaches of the Mekong; Especially in the border area with Thailand in the mountains there are various Thai peoples, which are called Khmer Loeu today. According to COUNTRYAAH, around 20% of the total population lives in cities, the largest city is the capital Phnom Penh with approximately 1.08 million residents. Large parts of the mountains are extremely thin or not populated at all, the majority of the Cambodians live in the central lowlands. The official language is Khmer (other languages ​​are French and Vietnamese). The state religion in Cambodia is Theraveda Buddhism, to which 95% of the population belong. Religious minorities are Muslims (2%) and Christians, and animistic religions are also practiced.

Decades of civil war and the cruel behavior of the Khmer Rouge have led to extremely poor living conditions for the population: With an estimated per capita income of $ 500 per year, the country is one of the poorest in the world. The medical care of the population is completely inadequate, the average life expectancy is 59 years. The family is the most important social security for the individual. So it can be explained that despite the high infant mortality rate of 7.1% – and the HIV infection rate of 2.6% – population growth continues to amount to 1.7% annually. The literacy of the population is 69%. 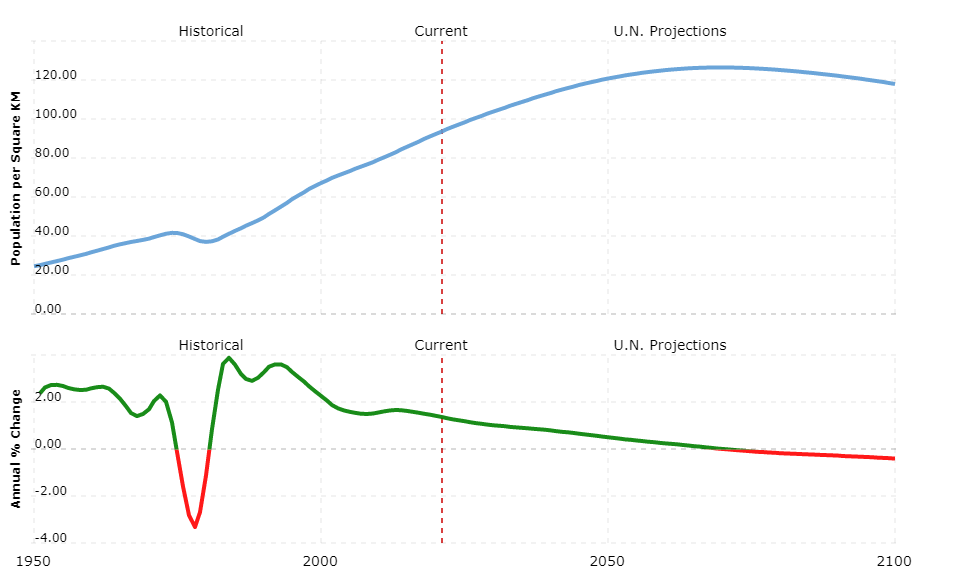 Cambodia is a constitutional monarchy under the 1993 constitution. The head of state is the elected king (Norodom Sihamoni, since October 2004), who primarily performs representative tasks. The executive lies with the Prime Minister (Hun Sen, since November 1998); he is usually the representative of the strongest party in the National Assembly.

The highest legal authority is the Supreme Court in Phnom Penh. The Cambodian legal system is a mixture of French law, royal decrees and common law; some regulations of communist rule have also been preserved.

Cambodia is divided into 24 provinces.

Cambodia experienced 1999, the first year in three decades in which no fighting took place. In accordance with the decades of civil war, the Cambodian economy and infrastructure are underdeveloped and the supply situation of the population is poor. A fifth of the population lives in poverty. Despite international intervention, black trading in precious woods and drugs is flourishing. Human trafficking (the sale of children and women to prostitution) has not yet been prevented.

Nevertheless, since the end of the 1990s, the economy has not only stabilized, but has even achieved high growth rates. Cambodia became the tenth member of the Southeast Asian group of states ASEAN; The ASEAN Free Trade Agreement entered into force in 2002. The growth is mainly due to increasing tourism and textile exports; however, the stagnation on the global market in the clothing sector fears that profits will decline.

Agriculture generates over a third of gross domestic product (GDP) and over half of all employed people work in this area. The main crop – now again for export – is rice, which is grown on 80% of the agricultural land. Three harvests a year are possible in the central lowlands. Other important crops are rubber, corn, cassava, soy and fruit (bananas, pineapples, mangoes). Forestry has a large share in the export volume (precious woods). Both the Great Lake (Tonle Sab) and the Mekong are extremely fish-rich waters, and fishing primarily serves to provide the population with self-sufficiency.

The industry in Cambodia is poorly developed and is mainly limited to small businesses, which mainly produce textiles and handicrafts or process food. Industry contributes about a quarter of GDP. Phosphate, bauxite, tin and gemstones are mined from mineral resources. The main export is to the USA and China; The main suppliers of the imported goods (crude oil, food and beverages, machinery and vehicles as well as medicines) are China, Vietnam and Thailand.

Of a total of 28,000 km of roads, only 2,000 km are paved. In the meantime, passenger trains no longer run, only freight trains. Regular international direct flights to Cambodia practically only take place within the region, e.g. B. via Bangkok (Thailand).