The Republic of Botswana (international spelling; official German spelling: Botswana) is a landlocked country in the south of the African continent and, with an area of ​​600,350 km², is about the size of France. Botswana borders on Namibia in the west and north,on Zambia and Zimbabwe in the northeast and on South Africa in the southeast and south. See Botswana country abbreviation.

Approx. 80% of the total land area is taken up by the dry area of ​​the Kalahari, which is on average 900 to 1 100 m above sea level. The Kalahari is a basin filled with sand that is bordered by ranges of hills to the west and east. The sand layer is sometimes only a few meters, but in some places up to 200 m thick. The southwest of the Kalahari is characterized by dune fields.

The Okawango Basin is located in the north of Botswana: The Okawango from Angola, with its numerous tributaries, forms an extensive inland delta here. The approximately 14,000 km² swamp area is one of the largest untouched wetlands in the world. In the event of flooding, the drainage-free Makgadikgadi salt pan, which is located further to the northeast, is filled with water and covers around 6,500 km².

Alongside the Okawango, the rivers Chobe in the north and Limpopo in the southeast are year-round rivers. Most of the rivers in Botswana have irregular water.

The capital Gaborone is located in the south-east of the country in the border area with South Africa.

The climate of Botswana is continental and semi-arid to arid. There are large temperature differences in the Kalahari (from 40 °C to below freezing). In Gaborone, in the south-east of the country, an average of 25 °C is measured in the summer month of January and 15 °C in July. Average annual rainfall is around 650 mm in the north of the country and around 250 mm in the southwest. Much of the rain mostly falls in the form of thunderstorms in the hot summer months, so the moisture evaporates quickly. In addition, the rain quickly seeps into the permeable soil. The result is recurring throughs.

The Kalahari is a dry savannah with bushes, grasses and thorn bushes. In the north and east, the savannah turns into dry forests that drop leaves.

In the swamp area of ​​the Okawango Delta, both the flora and fauna are very diverse.

Papyrus, reeds, palm trees, precious woods and a variety of flowers grow here. In the Okawango basin and in the eight national parks there are still large populations of mammals such as elephants, buffalos, rhinos, antelopes, lions, leopards, cheetahs, giraffes and zebras. The bird world has over 540 species in the swamp areas alone. These include ospreys, cormorants, ibises and cranes. A large number of aquatic animals find an ideal habitat in the untouched swamps.

Around 1.8 million people live in Botswana; With an average of three residents per square kilometer, the country is one of the most sparsely populated countries in the world. Around a third of the population lives in cities, the largest of which is the capital Gaborone with around 187,000 residents. Other large cities are Francistown (83,000 residents), Molepolole (55,000) and Selebi-Phikwe (50,000).

Around 95% of the Botswans belong to Bantu-speaking peoples. According to COUNTRYAAH, 75% of the total population are Tswana, the largest tribes of which are the Bamangwato and Bakwena. 12% belong to the Shona Bantu people. The rest of the population is made up of San, Khoi-Khoi, Ndbele, whites, Indians and half-breeds.

About half of the population is attached to the Christian faith, which is often linked to indigenous religious practices. Muslims and Hindus represent religious minorities. The official languages ​​are Setswana and English.

Social and health services in Botswana are little developed and completely inadequate, especially in rural areas. The average life expectancy is 50 years. Population growth was 2% at the end of the 1990s, but is declining sharply: Every fourth adult resident is infected with HIV, the causative agent of the immune deficiency disease AIDS. Almost 40% of the population are younger than 15 years. The illiteracy rate is around 20%. 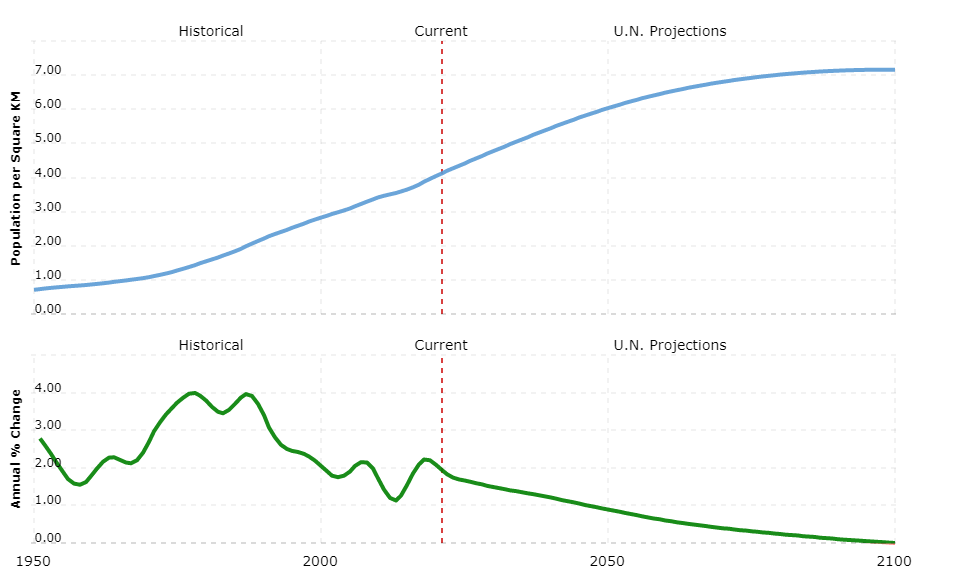 According to the 1966 constitution, Botswana is a presidential republic. The head of state is the president, who is elected by parliament for a five-year term (since April 2008 Seretse Ian Khama). He is also head of the government and commander-in-chief of the armed forces. The President appoints the ministers, their representatives and the Vice President and has veto power on all bills.

The Parliament consists of two chambers: the National Assembly with 63 seats (57 of which are directly elected by the people every five years, four are appointed by the President and two are ex officio) and the “House of Chiefs” with 15 members. These are composed of the chiefs of the eight Tswana tribes, four elected subchiefs of the districts of Chobe, Francistown, Ghanzi and Kgalagadi and three specially elected members. Tribal bills must be submitted to the House of Chiefs, which has an advisory role only.

The dominant political party since independence in 1966 has been the “Botswana Democratic Party” (BDP). The strongest opposition parties are the “Botswana National Front” (BNF) and the “Botswana Congress Party” (BCP).

Botswana is divided into nine districts.

When independence was achieved in 1966, Botswana was initially dependent on British subsidies. Since the 1970s, the discovery and extraction of mineral resources such as diamonds, copper, nickel and coal have led to an enormous economic boom. Livestock farming was also expanded for the export market (Botswana was one of the leading meat suppliers in Africa in the early 1990s). Despite economic crises such as the drought of the century in 1991/92, which led to a 50% reduction in livestock, the country is characterized by high political stability and growth rates. Botswana is one of the wealthier countries in Africa, but there is a large income gap (an estimated 30% of the population lives below the poverty line) and high unemployment rates (according to official figures 17.6%, estimated somewhat higher). In addition,

Around 20% of the population work in agriculture, where 3% of the gross domestic product (GDP) is generated. Just under 5% of the country’s land can be used for agriculture, mainly millet, maize and legumes are grown. Cattle breeding (especially cattle) plays a much more important role. Food must be imported to meet the food needs of the population.

Mining is the backbone of Botswana¡¯s economy. In addition to diamonds, coal, copper and nickel are mined. Diamond trading revenues account for more than 30% of total government revenue. In 2007, uranium deposits were found in the northeast of the country, which could lead to further diversification of the Botswana economy.

Tourism is another strong pillar of the economy. It helps the African state to generate the necessary foreign exchange income.

The industry is only moderately developed and focuses on the processing of agricultural products (slaughterhouses, breweries). There are also textile and shoe manufacturers. The EU countries are the most important trading partners for exports (diamonds, copper, nickel, sodium carbonate, meat and textiles), while South Africa handles three quarters of its imports (fuels, machinery and food).

There is an international airport in the capital Gaborone. The rail link between South Africa and Zimbabwe runs through the east of the country.