The Kingdom of Bahrain consists of 33 islands that lie in the Gulf of Bahrain, a bay of the Persian Gulf. In the south the bay is surrounded by the Qatar peninsula, in the west is the mainland of Saudi Arabia. Only six of the islands are permanently populated, the main island of Bahrain occupies 80% of the total 695 km² area. The next largest island is the main island of the same name of the Hawar Group in the southeast (41 km²), followed by Umm Nasan (19 km²) in the northwest and Al Muharrak (17 km²) in the north. See Bahrain country abbreviation.

The main island of Bahrain, like most of the islands, consists of limestone cliffs and is mostly flat. From the coast, the country rises slightly up to a plateau that is approximately 30 to 60 m above sea level. Bahrain’s highest peak is Jabal al Bukhan with 135 m. On the edges of the plateau there are sand dunes, in the south and southwest of the main island there are wide areas of sand and salt marshes. Limited agricultural use is possible due to the presence of springs and artesian wells on a narrow coastal strip in the north and northwest of the island.

The capital Manama is located on the main island of Bahrain.

The climate of Bahrain is characterized by hot summers, warm winters and great drought. The few rainfall (annual mean of 95 mm) mostly fall in the months of December to February. Nevertheless, the average humidity is around 75%. While the temperatures in the winter months November to April average around 18 °C, in summer average values ​​around 33 °C and maximum values ​​up to 45 °C are measured. Typical for the climate of Bahrain is the hot, humid wind from the northwest (Shamal) or the dry and hot desert wind (Qaws), which comes from the Great Arab Desert.

Until the beginning of the 20th century, large stocks of date palms were typical of the fauna of the main island of Bahrain. Due to clearing for agricultural purposes or drying up (due to the sinking of the groundwater level), only small residual stocks are available today. The country is characterized by poor, desert-like vegetation with thorny shrubs and hard grasses.

The animal world is also poor in species. Larger mammals, such as gazelles, are almost extinct due to the restricted habitat and intensive hunting. Desert and spring mice, lizards and the sneak cats (mongooses) imported from India are still common. Arabian oryx antelopes live in a 10 km² protected area in the southwest of the island.

Over a million people live in the Kingdom of Bahrain, most of them in the north of the main island. The largest city is the capital Manama with approximately 155,000 residents. At almost 50%, the proportion of foreigners is one of the highest in the world. Three quarters of non-Bahraini come from other Arab countries, around 17% are Indian, and smaller parts of the population come from Pakistan or Europe (especially Great Britain).

Islam is the state religion in Bahrain, around 90% of the total population are Muslims. Over two thirds of them are Shiites, but the ruling class in the country is recruited from the third third Sunnis. Christians and Hindus form small religious minorities.

Living standards are relatively high, with an estimated GDP per capita of around $ 25,000, and social security and health care are well developed. According to COUNTRYAAH, life expectancy averages 74 years and population growth is around 1.5%. There is no compulsory school attendance, but there are enough schools available. The literacy rate is given as 89%. There is a university in the capital, Manama. 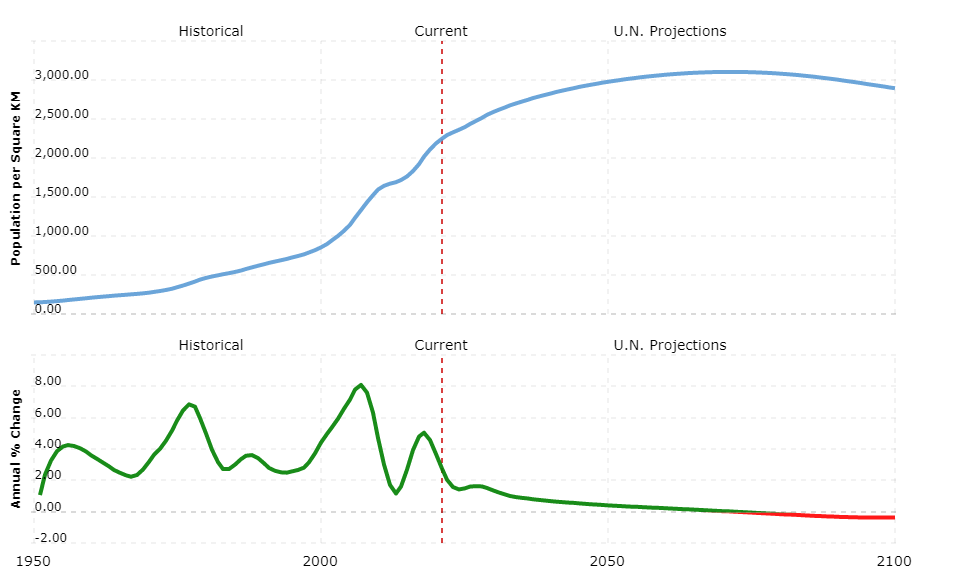 According to the 2002 constitution, Bahrain is a constitutional hereditary monarchy (emirate) with the king as head of state (Hamad Ibn Isa Al-Khalifa, emir since 1999; king since 2002. The Al-Khalifah family has ruled the country since 1782). The head of government is Khalifa bin Salman Al-Khalifa (since 1971). The Parliament consists of two chambers: the Chamber of Deputies (40 members, directly elected by the people for four years) and the Consultative Council (Madschlis al-Shura, 40 members, appointed by the King for four years). The judiciary is independent of the king and parliament.

Bahrain has been divided into five governorates since 2002, before that the country was divided into twelve districts.

Until the beginning of the new millennium, the pillars of the successful economy were the oil and natural gas deposits, whereby the oil deposits are practically exhausted (natural gas probably around 2015). In recent years, a large part of the proceeds from oil exports have been invested in building an oil-independent economy. The industry in particular has been expanded and diversified; Bahrain now has a modern aluminum smelter and processing plant, a refinery that processes oil from Saudi Arabia and a shipyard. The country also became an international financial center; Tax breaks and a wealthy clientele are attracting more and more foreign banks, credit institutions and service companies. In 2004, Bahrain was the first Gulf country to sign a free trade agreement with the United States.

Due to the nature of the soil and the lack of water, agriculture only plays a subordinate role in Bahrain, only 1% of the workforce is employed here and approx. 0.75% of the gross domestic product is generated here. The most important cultivated products are vegetables, rice, dates and citrus fruits. Sheep and goats are kept to a limited extent. Fishing is of growing importance. Bahrain’s groundwater reserves are almost exhausted, but modern seawater treatment plants ensure that the population is supplied with drinking water.

An important but difficult industry is the textile industry. In 2004 there was a free trade agreement between the United States and Bahrain. Tourism is also very important.

The country’s infrastructure is very well developed in the densely populated north of the country. A 25 km long road embankment connects the main island of Bahrain with Saudi Arabia. In addition to the port of Manama, which is an important hub for the trade of all Gulf states, the deep-sea port Sulman is of great importance, which is the core of a free trade zone. The only commercial airport is Bahrain International Airport on the island of al-Muharraq.