The Bahamas (The Commonwealth of the Bahamas), which belong to the West Indies, consist of around 30 larger and 700 smaller islands and reefs (cays) in the Atlantic Ocean, which form an approximately 1,000 km long arch from the southeast coast of Florida along the Cuban Form the north coast to Haiti. The total area of ​​the Bahamas is 13,939 km². See Bahamas country abbreviation.

The Bahamas represent the peaks of a plateau that rise just a few meters out of the water and rise from the Atlantic at a depth of more than 5,000 m. Between Great Abaco and Eleuthera is the deepest underwater canyon that has been discovered so far. Its depth is said to be just under 4,300 m. The highest elevation above sea level is Mount Alvernia on Cat Island at 63 m.

Large parts of the islands, which consist of coral limestone and limestone, are karstified. There are no major rivers in the Bahamas because the limestone lets rain and spring water seep away. On some islands such as Andros (Blue Holes) there are smaller lakes, here layers of clay in the ground prevent seepage. Andros, the largest island in the Bahamas, is heavily divided by bays and lakes and rich in swamps and lagoons.

The Bahamas are located in the subtropics and under the influence of warm ocean currents. The low temperature fluctuations are characteristic throughout the year, the average values ​​for the capital Nassau in January are 23 °C, in July 26 °C. In summer (May to November) the southeast trade wind blows constantly, which often causes heavy rain showers. In the winter half-year, the north-east trade wind brings cooler air masses, usually the temperatures do not fall below 16 °C. Average rainfall in the northwest of the Bahamas is around 1,200 mm per year, and around 1,000 mm in the southeast. Cyclones can occur between June and September.

Savannahs are typical of the vegetation in the Bahamas. On some islands (e.g. Great Abaco, Grand Bahama, Andros) there are also extensive pine forests, on the northwest, more humid islands pine trees grow, small areas are covered with damp forests with precious woods such as mahogany and ebony. There are mangrove plants on the coasts of the islands.

The wildlife in the Bahamas has few species. In addition to the rabbit-sized agoutis, which belong to the rodents, some snake species, lizards and iguanas live here. Around ten thousand flamingos live in Inagua National Park. The Bahama Amazon belonging to the parrots is threatened with extinction. The coastal waters with numerous coral reefs are diverse and diverse.

The total population of the Bahamas is around 300,000, with over a third (210,000) living in the capital, Nassau, on the island of New Providence. Only around 29 islands are inhabited, and a few smaller ones are privately owned.

Around 85% of the population are black people with West African ancestors. Whites, mostly descendants of British settlers, make up around 12% of the population. Mulattoes and smaller groups of Greeks and Haitians make up the rest. The Protestant Baptists, Anglicans and the Church of God have by far the most followers in the population. Almost a fifth belong to the Roman Catholic Church, about 5% are Methodists. Other beliefs are only small minorities.

According to COUNTRYAAH, the population growth is 0.7%, the average life expectancy is 66 years. 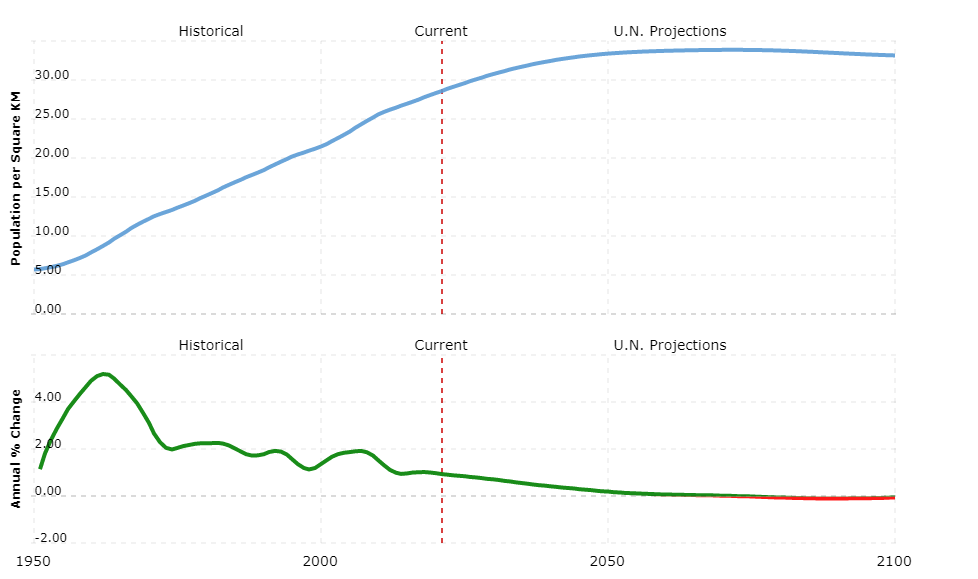 The official language is English.

The Bahamas have been independent under the British Commonwealth since 1973, and there is a parliamentary-democratic monarchy. The constitution also dates from 1973. The head of state is Queen Elizabeth II of England (since February 1952), who is represented on the islands by a governor general (Marguerite Pindling, since July 2014). The head of government is the Prime Minister (Perry Christie, since May 2012), who is the representative of the majority party in Parliament.

The Parliament consists of a Senate (16 members, who are appointed for five years by the Governor-General on the recommendation of the Prime Minister and the leader of the opposition party) and a Chamber of Deputies (38 seats, members are directly elected by the people for five years).

The economy of the wealthy islands essentially lives from tourism, which has replaced fishing and agriculture as the main economic factor since the mid-20th century. Around 60% of gross domestic product (GDP) is generated in this area, and around half of the workforce is directly or indirectly involved in tourism. The Bahamas are popular as a vacation destination for the Americans (around 80% of tourists). The fall in tourism associated with the global financial crisis in 2009 hit the country hard.

Tax breaks (income and profits are not taxed here) and banking secrecy led to over 400 banks and many insurance companies settling in Nassau and the capital of the Bahamas becoming an international financial center. Laws were tightened in 2001 under pressure from the United States, and many institutes have since been closed.

Only 1% of the area can be used for agriculture, the soil is not very productive and there are hardly any resources. 80% of the food has to be imported. In small businesses, vegetables, fruit and sugar cane are grown to cover their own needs. Fishing contributes fish and crustaceans (lobsters) as export goods.

The industrial center of the Bahamas is located in Freeport on the Grand Bahama Island. There are companies in the pharmaceutical and electrical engineering industries, a cement factory and an oil refinery.

The main trading partners of the Bahamas are the USA. The main export goods are fish and seafood, sea salt and rum, the main imports are foodstuffs, consumer and basic necessities, machines and raw materials (eg petroleum).

Drug trafficking or drug smuggling is a major problem in the Bahamas. Due to its favorable location, the country is the most important stopover for drug smuggling between Colombia and the USA.