The “Islamic Republic of Afghanistan” (Dari: Dowlat-e Eslami-ye Afghanistan, Pashto: De Afghanistan Islami Dawlat) is a landlocked country in Central Asia. It borders on six neighboring countries: at the far east end with China, in the east and south – with the longest border of 1,810 km – with Pakistan, in the west with Iran, in the northwest with Turkmenistan, in the north with Uzbekistan and in the northeast with Tajikistan. See Afghanistan country abbreviation.

Afghanistan is a high mountain country: almost half of the country is between 600 m and 1,800 m above sea level, a third between 1,800 m and 3,000 m and around a tenth over 3,000 m. With a total area of ​​652,090 km², the country is about twice as large as Germany. The country is divided from the central Hindu Kush (Indian for mountains) into a southern and a northern part. The Hindu Kush is a high mountain range whose glaciated main ridge in Tirich Mir, which is already on Pakistani territory, has its highest peak at 7,690 m. Afghanistan’s highest mountain is the Nowshak at 7.485 m. To the southwest, the mountain range breaks down and only reaches heights of up to 4,000 m. Numerous passes over the mountains are over 3,000 m. The lowlands of Turan are located north of the Hindu Kush. In the south, the highlands merge into flatter mountain regions, steppes and semi-deserts. In the border area with Iran in the southwest of the country lies the Sistan plain with a large number of salt marshes.

In a narrow promontory that stretches about 200 km to the east, the country and the Wakhan region have shares in the Pamir region. Most of the country’s rivers originate in the central highlands and seep away within the country’s borders. An exception is the Kabul, which is west of the city of Kabul rises and flows in the Pakistani Attock into the Indus, which flows into the Indian Ocean. The Helmand (Persian Darya-ye Helmand) with a length of 1 150 km flows into the swamps in the Iranian-Afghan border area. The Amu Darya (in ancient times called Oxus) is one of the longest rivers in Central Asia with 2 540 km (with the longest inflow). It forms part of the border between Afghanistan and Tajikistan, Uzbekistan and Turkmenistan. The northwest is dominated by Hari Rud (Persian Rudkhaneh-ye Harirud), which is about 1 100 km long and seeps into the Karakum desert in Turkmenistan. The country’s main lakes are the Saberi in the southwest and the Istadeh-ye Moqor saltworks in the southeast.

The inland continental climate is characterized by large temperature differences between summer and winter. The temperatures in January are 3 °C in Herat in the northwest, -3 °C in Kabul in the southeast and 6 °C in Kandahar in the south. In July, however, temperatures rise to 29 °C in Herat, 24.5 °C in Kabul and 29 °C in Kandahar. The dry to semi-dry climate can be seen in the precipitation values ​​in all three cities: in Herat and Kandahar they are less than 200 mm, in Kabul an average of 339 mm per year. Only the east has summer monsoons.

The country’s vegetation is predominantly sparse and characterized by steppes and desert steppes. Thorny upholstery plants and mugwort plants can be found especially in the central highlands. The lower layers of the Hindu Kush have tree corridors with pistachio trees, and juniper stands grow at a greater height. In the desert regions of the south there are salt plants, so-called halophytes. There are also saxaul trees whose gnarled branches form scale leaves. There are smaller forests on the south-east slope with higher rainfall (in total only around 3% of the country’s area is forested), which mainly consist of holm oak. At higher altitudes, the larger vegetation consists of Himalayan cedars and tear pines, spruces and firs follow from 2,600 m, which pass over 3,000 m into birch stands and bushes. Tamarisk, Willows and poplars are occasionally found along the rivers. An exception can be found in the basin of Jalabad: here subtropical vegetation in the form of palm trees, fig trees and bamboo thrives.

The once large number of large mammals in the country are severely decimated. Wolves, foxes and snow leopards still live in the mountain regions; Wildcats are common. Screw goats (Markhor) and ibex live in the high mountains, here you will also find wild sheep (especially the Marco Polo sheep) and brown bears. Smaller vertebrates are moles, shrews, hedgehogs and bats. There is a large number of prey birds such as vultures and eagles. In addition, crows, partridges, snipes, pelicans, cranes, quails and pheasants live in the country. Hyenas, jackals, gazelles and wild dogs live in the steppe regions.

According to COUNTRYAAH, Afghanistan has a total population of around 32 million. The largest city is the 3,500-year-old capital Kabul with around 2.5 million residents. The country’s second largest city is Kandahar in southern Afghanistan with 450,000 residents, Herat founded by Alexander the Great in the northwest with 350,000 residents, and Mazar-e Sharif in northern Afghanistan, which has around 300,000 residents and with the tomb of the fourth Caliph Ali is a place of pilgrimage. (Due to the strong internal migration as a result of the decades-long civil war and the associated millions of refugee flows, all information on population figures fluctuates greatly.) 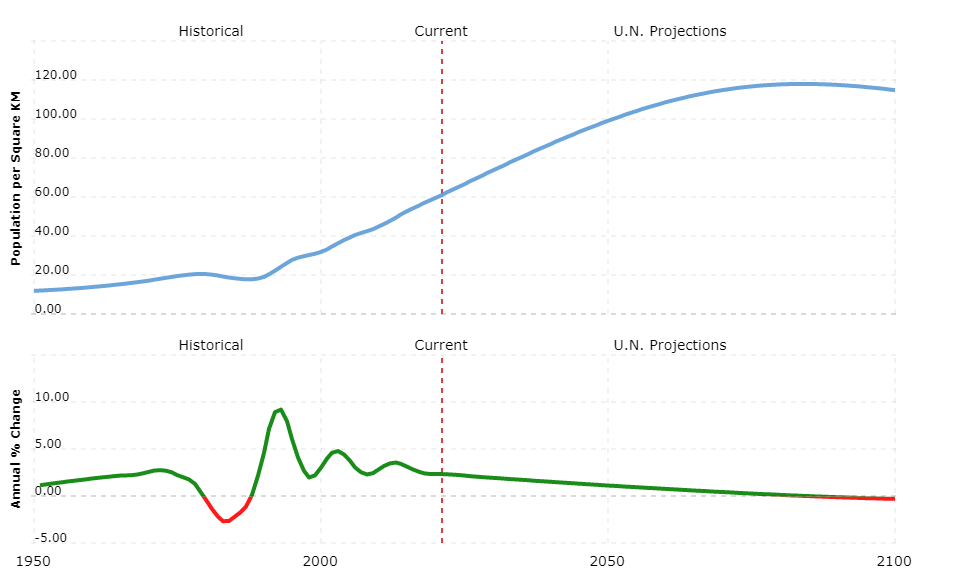 The population of Afghanistan is made up of different ethnicities and languages. The Pashtuns (formerly Afghans) are the people of Afghanistan and are the largest population group (40%). They are characterized by a strict code of honor. The second largest group are the Tajiks, who make up about a quarter of the total population. Uzbeks (5%) and Hesors (15%) and the Aimak are other minorities.

The official languages ​​are Pashto and Dari. Both belong to the Indo-European languages. Uzbek, Turkmen and Kyrgyz are also spoken.

The vast majority of the population (84%) are Muslim Sunni. The peoples of the Hesors and Kisilbash are Shiites. Small minorities of Sikhs, Jews and Hindu also live in the country. The average life expectancy is 44 years, only 36% of Afghans (21% of women) can read and write.

Hamid Karzai (transition premier since December 2001) was confirmed by regular elections in October 2004 and sworn in for a second term in 2009. On January 16, 2004, a new constitution was signed, which provides for a presidential system with a strong position of the head of state (also head of government). The president is directly elected every five years and his term of office is limited to a maximum of two terms.

Legislative power consists of a parliament with two chambers (National Assembly). The members of the lower house (House of the People, Wolesi Jirga; maximum 249 seats) are elected directly by the people – 68 seats are reserved for women and ten for the nomad minority of the Kuchis -, the members of the upper house (house of the elder, Meschrano Jirga ; 102 seats) appointed by provincial councils or by the president (one third alternately; four-year term). In rare cases, the President can also consult the Supreme Council (Loya Jirga, composed of members of the National Assembly and representatives of the provinces); the latter in turn can indict the president.

Afghanistan is an “Islamic Republic”, the state religion is Islam; no law may contradict the Koran. Men and women are legally equal.

The administration is divided into 34 provinces.

Afghanistan is a very poor country. From 1979 to 2001, the Soviet invasion, civil wars, and finally attacks by US and allied forces destroyed large parts of the infrastructure and manufacturing facilities. Since 2003, the economic situation has improved as a result of political stabilization, and GDP rose by around 30%. Nonetheless, own income only covers part of the running costs of the state budget, which still has to be supported by subsidies and payments from the international community.

Around 80% of the population work in agriculture. Irrigation farming was the most important method of cultivation until the war. Animal husbandry is carried out especially in nomadic ways of life. The main agricultural products are wheat, corn, barley, rice, cotton, fruit, nuts and pistachios. The service sector in particular has developed as the engine for economic growth.

Poppy is cultivated especially in the border area with Pakistan. Afghanistan’s share of world opium production is around 90%. Drug transit trade is also one of the few profitable industries. Successes in the fight against drug cultivation in the north and northwest of the country contrast with failures in central Afghanistan and the south. Farmers still lack profitable alternatives.

The country’s infrastructural connection could be improved through the construction of roads, airports and railway lines.