Albania lies on the Adriatic Sea and is separated from Italy by the approximately 80 km wide sea road from Otranto. The country borders Greece to the south, Macedonia to the east and Montenegro and Kosovo to the north. See Albania country abbreviation.

Two thirds of the total area of ​​28.748 km² are mountainous and are above 1,000 m. The north and east of the country are occupied by the Albanian Alps, which belong to the Dinaric Fold Mountains. At 2,694 m, the Jezerca is the highest peak here. In the south of Albania there are foothills of the Epirus (Tumori Mountains with heights of up to 2,400 m), in the central part of a strongly broken up chain mountain country. In the western part of the country, the mountain ranges merge into the low mountain ranges and the hilly landscape. Between this and the Adriatic Sea lies the coastal region of Lower Albania, which in its northern part is an alluvial plain interspersed with lagoons (maximum 60 km wide, partially marshy), and in the southern part is a steep coast (Albanian Riviera).

In the mountainous east of the country there are large lakes on plateaus, such as Lake Ohrid on the border with Macedonia and Lake Prespa, in which Greece and Macedonia also have a share. The most important river in Albania is the Shkumbin, the longest river with around 285 km is the Drin, which emerges from a confluence of the white and black rivers and flows into the Adriatic Sea. The capital of Albania is Tirana.

In the western part of the country near the coast there is a Mediterranean climate with dry and hot summers and mild, humid winters. The average temperatures in Vlorë on the south coast of Albania are 9 °C in January, 25 °C in July, 7 °C in Tirana in January and 25 °C in July. The average annual rainfall is 1,000 to 1,200 mm.

In the mountain regions and inland, the climate is more continental, the winters are cold and snowy (mean January temperature around 0 °C), the summers also with high temperatures (approx. 20 °C), but more precipitation (approx. 2,000 mm).

Almost a third of Albania is still forested today. In the Mediterranean parts of the country there are forests of evergreen oak or maquis, gorse and thorn bushes in the places that have been cut down. In the higher areas there are extensive mixed deciduous forests (elms, beeches, oaks, chestnuts) as well as pines and firs. Subalpine vegetation with dwarf shrubs and mats follows from a height of approximately 1,800 m.

The mountains offer retreats for larger mammals such as bears and wolves, and deer, chamois and wild boars also live here. The golden eagle, the heraldic animal of Albania, can also be found in the sparsely populated eastern part of the country.

Around 3.2 million people live in Albania, including around 600,000 in the capital Tirana (agglomeration). According to COUNTRYAAH, around 95% of the population are Albanians, who can be divided into two main groups: the north live in the country, the tokens live in the south. The official language, Albanian, established in 1945, is a Tuscan dialect. Greeks and Macedonians are the main minorities in the country.

Around 70% of the population are Muslims, around 30% are Christians (around two thirds of whom are followers of the Greek Orthodox Church, one third are Catholics). Despite the mid-range birth rate, the country’s population growth is only about 0.54%, which is due to the emigration of many people. The standard of living is low, Albania is one of the poorest countries in Europe. In terms of social and health care, the country has not yet recovered from the political upheaval in 1992.

Life expectancy is around 77 years. Literacy is almost complete. 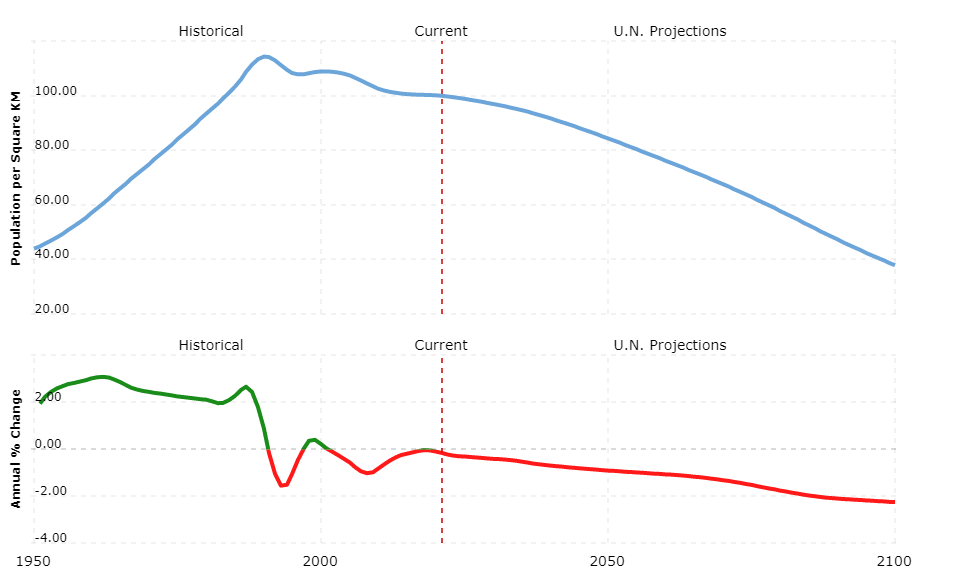 According to the transitional constitution of 1991, Albania is a parliamentary republic with a multi-party system. In 1998 a new constitution was adopted by the parliament. The head of state is the President (Bujar Nishani since 2012), who is elected by the Parliament (People’s Assembly) for five years. The head of government is the Prime Minister (Prime Minister, Edi Rama since 2013). At his suggestion, the President appoints the cabinet ministers.

The legislature lies with the People’s Assembly (Kuvendi Popullor), which has 140 seats. The deputies are elected by the people in a proportional election for four years. The main political groups in Albania are the Democratic Party and the Socialist Party.

Albania is divided into 12 districts. Decisions of the constitutional court bind the state organs. There is a Supreme Court.

The political upheaval in 1992 with the abandonment of communism and the opening of the markets brought the poor and underdeveloped country to the brink of economic collapse. Although it has made significant progress since 1998, the agricultural state remains one of the poorest countries in Europe. Albania continues to receive foreign aid, especially from the EU. Economic growth has been around 6% for several years, but is mainly due to transfers from Albanians abroad and informal construction work. Problems are caused by widespread corruption and energy shortages that lead to frequent power cuts. Another obstacle to the economic upswing is the poorly developed infrastructure in the country. A motorway network has been in constant expansion since 2000.

An important industry in Albania is agriculture, which can use the country’s fertile soil; almost half of the workforce is employed here. Fruit and vegetables as well as wheat, corn and sugar beet are cultivated. Cotton, olives, citrus and wine thrive in the country’s western regions. Albania also exports tobacco. 20% of the workforce is employed in the service sector and 36% in industry.

The country’s energy requirements can be met from its own resources (oil, natural gas, coal). In the industry, the processing companies for the mining raw materials are in the foreground, companies from the areas of food processing, textiles and clothing, chemicals and building material production also play a role. The main export goods include crude oil, textiles and clothing, raw materials as well as iron and steel, and mainly food, petroleum and chemical products are imported. The main trading partner is Italy (31% of imports and 53% of exports), followed by Greece and Turkey.

The currency is the Albanian lek (= 100 Qindarka).