Japan (Japanese: Nihon-Koku / Nippon-Koku; Nihon / Nippon = “Land of the Rising Sun”) is with an area of ​​377 801 km² somewhat larger than Germany and consists of around 3,900 islands east of the Asian mainland in the Pacific Ocean lying. Between Japan and the mainland is the Japanese Sea in the north and the East China Sea in the south. The distance to the Russian coast is around 300 km, the nearest Russian island (Sakhalin) is just under 75 km from the Japanese island of Hokkaido.

Most of the islands belonging to Japan are only small and not inhabited. The four main islands are Hokkaido (81 470 km²), Honschu (or Hondo, 227 414 km², which corresponds to about two thirds of the total national area), Schikoku (18 156 km²) and Kyushu (36 554 km²). The islands represent the part of a mountain that protrudes from the sea, which was created by the collision of the Pacific and Eurasian plates. As with other regions of this type, it is a zone of intense tectonic activity; over 1,400 earthquakes are recorded in Japan each year.

Almost 80% of the country’s territory is occupied by high mountains (including some 200 volcanoes, of which over 30 are still active). Many of the peaks are over 2,000 m high, Mount Fuji on the island of Honschu is the highest peak in Japan at 3,776 m. Larger lowlands can only be found on Hokkaido and Honschu. The Kanto plain on Honschu is the largest plain in Japan with an area of ​​around 14,700 km². The capital Tokyo is also located here. Other lowlands on the island are the Osaka and Nobiebene. The rivers Ishikari and Tokachi formed wide valleys on Hokkaido. The numerous rivers in Japan are mostly short and have a steep gradient. The longest river is the Shinano on the island of Honschu with a length of around 369 km. It rises at Kobushi (2,899 m) and flows into the Japanese Sea. Some of the rivers are acidic due to their origin in the volcanic mountains. The largest lake in Japan is the Biwasee with an area of ​​approx. 675 km², which is also on Honschu.

The climate on the Japanese islands is inconsistent and ranges from cool temperate zones on the island of Hokkaido to warm temperate to subtropical regions on the Nasei Islands (Ryuku Islands) in the extreme south. Influencing factors are not only the large north-south extension (around 3,000 km), but also the mountain ranges on the islands and ocean currents such as the cool Oyashio stream in the north and the warm Kursohio stream in the south.

Average temperatures in Sapporo on the island of Hokkaido in the north are -6 °C in January and 20 °C in July. In the capital Tokyo on Honschu, the values ​​are around 3 °C in January, 26 °C in July, Nagasaki in southern Japan in January at 5.5 °C, and around 27 °C in July.

Due to the encounter of dry continental and humid maritime air masses, high amounts of precipitation are achieved in Japan, which generally decrease from south to north. While annual average values ​​of around 2,000 mm are measured on the islands in southern Japan, the figure is around 1,500 mm on Honschu and just over 1,000 mm on Hokkaido in the north. The majority of precipitation falls from May to October (southwest monsoon).

In late summer and early autumn, typhoons (cyclones) with extremely heavy rains can form, especially in the southwest of the country, which form over the Pacific Ocean.

Depending on the different climate zones and the different altitudes, the vegetation on the Japanese islands also differs. Around two thirds of the state is forested: In the north on the island of Hokkaido, boreal coniferous forest predominates, which turns south into summer-green mixed forest. From the middle of the island of Honschu, evergreen deciduous forests with laurel plants, holly trees, ferns and oaks appear. In the south of the country there is tropical flora with evergreen rainforest and mangroves on the coasts.

Due to the island locations, there is a wildlife in Japan that differs from that of the Asian mainland. In addition to wild boars, badgers, deer, antelopes, weasels and hares, the occurrence of which depends on the corresponding altitude, the red-faced macaques live in Japan, a rare species of monkey that only occurs in this country. Other peculiarities of the animal world are, for example, the iriomotic cat, which was only discovered in 1966, and the remaining stocks of the East Asian ibis. The collar bear, which is at great risk on the mainland, is still widespread here. Hokkaido in northern Japan is home to the mountain hare, ptarmigan and Odin chicken, sable and brown bear.Reptiles include sea turtles, various types of snakes (including sea snakes) and even larger stocks of the Asian giant salamander, which can grow up to 1.5 m long.

With a population of around 127.42 million, Japan ranks eighth in a global comparison of countries. The population density is given as an average of 337 residents per square kilometer, but is actually higher, since large parts of the state (especially the mountain regions) are not habitable. Almost 80% of all Japanese live in urban areas, four out of five live on the island of Honschu. The largest city is the capital Tokyo with 11.85 million people, if you count the suburbs. Other large cities are Yokohama (3.43 million), Osaka (2.60 million), Nagoya (2.17 million), Sapporo (1.82 million) and Kyoto and Kobe, both of which have around 1.5 million residents.

According to COUNTRYAAH, 99% of the total population are Japanese. South Koreans, Chinese and Brazilians form small minorities. The Ainu people, who mainly live on the island of Hokkaido, are the only indigenous minority whose exact origin has not been determined.

The official language is Japanese, which is spoken in many dialects. Written, the language consists of word and syllable characters. The literacy rate is 99%. The education and health system in Japan is very well developed (life expectancy for women is 85, for men 78 years).

Most Japanese (around 80%) are followers of several religions. Shintoism, in which natural deities are worshiped and a strong ancestral cult prevails, was the state religion until 1945 and still has the most followers today (over 40%). This religion has up to 200 different forms. Buddhism is just as diverse in Japan, to which around 40% of the Japanese also belong. At just under 0.7%, Christians are a small minority.

Population growth is zero. The level of education is very high; compulsory schooling comprises a six-year elementary school and a three-year middle school. Three quarters of the universities are privatized. 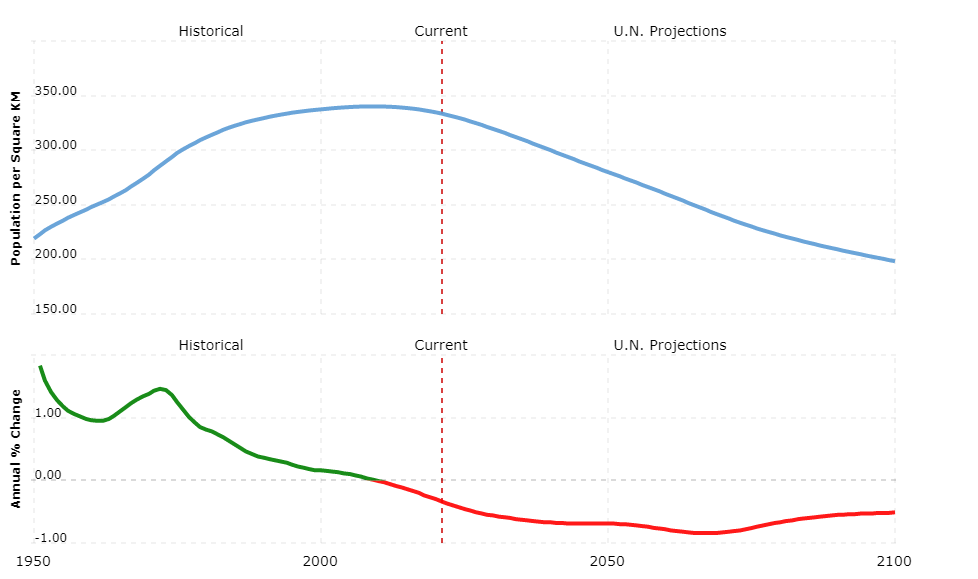 Japan is a parliamentary monarchy with a constitution from 1947. The Japanese emperor (Tenno) has only representative functions (Akihito Tsuyu No Mija, since 1989). The head of government is the Prime Minister (Shinzo Abe, since December 2012), who is the representative of the strongest party (mostly in the lower house). He appoints the ministers.

The legislature lies with the bicameral parliament (Kokkai). The lower house (Shugi-in) consists of 480 deputies who are directly selected for a term of four years. The House of Lords (Sangi-in) has 242 members, some of whom are elected directly, some through party lists and some as representatives of the prefectures. The members of the upper house hold their office for six years. Politically, the lower house, which monitors the state budget and foreign affairs, is more important than the upper house, whose decisions against decisions of the lower house can only have a suspensive effect.

Japan is divided into 47 prefectures, including two city prefectures (Osaka, Kyoto) and the capital area Tokyo. The prefectures each have their own parliaments, but only limited political independence.

In Japan, the areas of business, finance and politics are traditionally particularly closely linked. The strengths of the resource-poor country lie in the excellent work ethic and education of the population and the low expenditure for areas such as defense and armaments.

Around 12% of the state is used for agriculture; the personal needs for food cannot be covered. Rice, cereals (wheat, barley), fruit, vegetables, legumes, potatoes and citrus fruits (in the southern part of the country) are cultivated in the mostly hilly agricultural regions. Livestock farming plays a subordinate role, while fishing contributes significantly to meeting food needs.

Japan is one of the leading industrial nations and one of the G-7 countries. The Japanese companies are characterized by very high productivity and state-of-the-art facilities. Japan is the world leader in the fields of iron and steel production and automotive, ship and machine tool construction. Most of the raw materials required must be imported. Another central area of ​​industry is entertainment electronics, where inventions from abroad were first copied, then further developed and perfected. In the computer sector, Japan is an absolute leader in the production of computer-based games. The centers of industrial production are the metropolitan areas around Tokyo, Nagoya and Osaka / Kobe.

The country’s energy needs are largely met by imported oil and coal. After the accident at the Fukushima nuclear power plant in 2011, the government decided to phase out nuclear power by 2030.

Exports go mainly to China and the United States, followed by South Korea by a large margin. China was Japan’s most important trading partner for the first time in 2007. In the same year, Japan signed a free trade agreement with the ASEAN countries.

The transport infrastructure in Japan is well developed, there are 1,170,000 km of paved roads and 23,600 km of rails available, and shipping traffic traditionally plays an important role. The ports in Chiba, Kobe, Nagoya and Yokohama are among the ten largest sea ports in the world. The largest airports are Tokyo Haneda, Tokyo Narita, Kansai and Ch¨±bu.