The Socialist Republic of Vietnam is located in Southeast Asia and borders China in the north, the South China Sea in the east and south, and Cambodia and Laos in the west. With an area of ​​331 100 km², the country is somewhat smaller than Germany. The name comes from a Chinese name for the country: “Nam Vi¨ºt” means “Country in the South”. See Vietnam country abbreviation.

Vietnam stretches as a long strip along the coast to the South China Sea, the north-south extension is over 1,600 km. In the north the country is a maximum of 600 km, in the south up to 350 km wide. At the narrowest point, the distance between the neighboring country of Laos and the South China Sea is only 60 km.

Vietnam can be divided into three major landscapes: Tonkin (Bac Bo) in the north, Annam (Trung Bo) in the middle and Kotschinchina (Nam Bo) in the south.

Tonkin in the north consists mainly of mountainous areas, which are foothills of the Chinese Yunnan Mountains. Here is the highest elevation in the country, the Fan Si Pan with 3 142 m. The mountainous area encompasses the 22,000 km², densely populated Tonkin Delta. Shortly before the city of Hanoi, the Red River (Song Hong, also: Hong Ha), which originates in China, and its subsidiary arm, the Black River (Song Da), unite and form a delta before they flow into the Gulf of Tonkin.

The central part of the country is the highlands of Annam (Annamite Cordillera), which reach heights of up to 2,500 m. The mountains drop steeply towards the South China Sea, and towards the west in the form of several plateaus that lie at an altitude of 1,000 to 2,000 m above sea level. The coastal strip east of the mountains is narrow in most places.

The north of Kochinchina is occupied by plateaus that descend towards the southwest to the Mekong lowlands. With a length of around 4,500 km, the Mekong is the longest river in Southeast Asia and flows around 220 km from Cambodia through Vietnam before it flows into the South China Sea. In Vietnamese territory, the Mekong is fanned out into a large number of rivers that feed the huge Mekong Delta (approx. 70,000 km²).

Vietnam’s capital, Hanoi, is in the north of the country.

Vietnam has a predominantly tropical monsoon climate with high rainfall. In the south of the country, temperatures are high all year round. In Ho Chi Minh City, mean values ​​of 26 °C in January and 29 °C in July are measured. In Hanoi in the north of the country, the July mean values ​​are also around 29 °C, while the January temperatures of 17 °C on average are significantly lower than in the south of Vietnam. On average, between 1,500 and 2,000 mm of rain are measured each year, but there are major regional differences: In the Mekong Delta, precipitation sometimes reaches up to 4,000 mm and mostly falls during the summer months (southwest monsoon). On the slopes of the Annamite Cordillera, there are about 2,500 mm of rain per year, mostly during the winter months (northeast monsoon). In the mountainous regions in the northwestern part of the country, the precipitation falls partly as snow. Due to the extreme rainfall, typhoons repeatedly lead to devastating floods, especially in Tonkin, within a short time (up to 500 mm per day).

About a quarter of the country’s area is covered by forests, some of the original forest areas were destroyed by chemical defoliation during the Vietnam War, other areas (especially in the river deltas) were converted into agricultural land or cut down as an energy source. In the mountains in the north-west of Vietnam there are mainly coniferous forests, in the higher areas of the Annamite Cordillera and in Kochinchina tropical rainforest is growing. Deciduous monsoon forest can be found in lower areas, along the coast mangrove forest.

A large number of animals find a suitable habitat in the intact forest areas. These include leopards, tigers, Indian elephants, tapirs, bears, various types of monkeys, numerous snakes and reptiles. Protected areas such as the Cat Ba and the Cuc Phuong National Park contain endangered animal species such as Vu Quang wild cattle, giant muntjak and a subspecies of the Java rhinoceros that was only discovered in the 1990s. The species-rich bird life includes, among other things, the Sarus crane, blue rake, hornbill, giant kingfisher, snake eagle, fish owl and emerald flycatcher.

A total of around 83.54 million people live in Vietnam, the average population density is 252 residents per square kilometer, with the delta areas being much more densely populated. Only a quarter of the population lives in cities, the largest city is Ho Chi Minh City (Saigon) in the south of the country in Kochinchina with around 4.86 million residents, followed by the capital Hanoi with around 1.85 million and Haiphong, which is also in the north of the country and has around 1.71 million residents.

There are about 60 different ethnic groups in the country. According to COUNTRYAAH, 85% of the population are Vietnamese who call themselves Kinh. Minorities are Chinese, Thai, Khmer, Muong, Cham and Miao. The official language is Vietnamese, and English is becoming increasingly important as a commercial language. About two thirds of the Vietnamese population profess Buddhism, and Confucianism and Daoism are also widespread. Christians make up about 8% of the population, there are also several Buddhist sects (eg Hoa Hao).

The population growth is 1.2%. The health and education system is very well developed and also effective in rural areas. Life expectancy averages 71 years. School attendance is compulsory for children between the ages of six and 14, and the literacy rate is 91%. 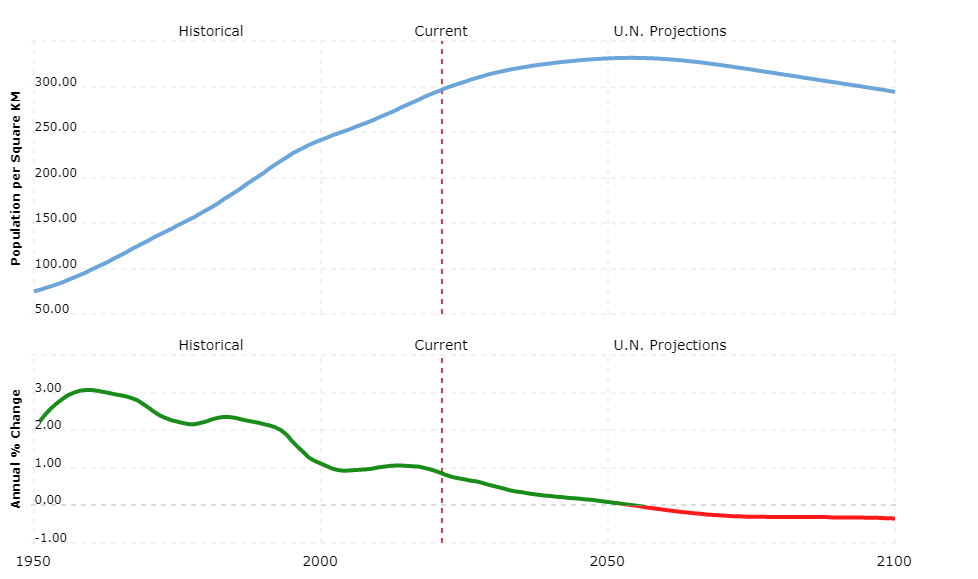 Vietnam is a one-party socialist republic, the current constitution is from 2014. The National Assembly, with 500 MPs elected by the people for a five-year term, appoints the President (Truong Tan Sang since July 2011) for a five-year term years. The President appoints the Prime Minister as head of the government (since June 2006 Nguyen Tan Dung) and, on the recommendation of the Prime Minister, the members of the cabinet. The National Assembly meets twice a year.

The policy guidelines are determined by the Political Bureau of the Communist Party of Vietnam or its Secretary General. The highest party organ is the party’s central committee (ZK), which usually meets twice a year. A party congress is held every five years. The country’s army is also subordinate to the party, not to parliament.

Since the early 1990s there has been a change from the planned economy to a market-oriented economy of a socialist character. The privatization of agriculture in particular led to an upswing. Vietnam is now the world’s largest pepper and second largest rice, coffee and cashew nut exporter. Vietnam has been a “Middle Income Country” since 2009, but income is very unevenly distributed between city and country.

Almost half of the workforce is employed in agriculture. The most important crop is rice, sometimes up to three harvests a year are possible. Pepper, cashew nuts, coffee, tea, rubber and cotton are also grown for export, soybeans, bananas, sugar cane and potatoes are also used for the local population’s own needs.

The most important mineral resources in Vietnam are hard coal and brown coal, ores, oil and natural gas. Heavy industry and the chemical industry are mainly located in the north of the country, while mechanical engineering, electrical engineering, the textile and food processing industries are also important. The contribution of the industrial sector to the gross domestic product is over 40%, the contribution of the service sector 37%.

The ASEAN Free Trade Agreement entered into force in 2002. In 2007, Vietnam became the 150th country in the World Trade Organization (WTO).

A total of around 210,000 km of roads are available (60,000 km of which are paved), and the rail network comprises approximately 3,200 km. Inland navigation is important for transport, especially in the large river deltas. Major seaports are Haiphong, Da Nang and Ho Chi Minh City. Ho Chi Minh City and Hanoi have the main international airports.