The United Arab Emirates (UAE), a federal federation of seven sheikdoms, is located in the southeast of the Arabian Peninsula. With an area of ​​around 82.880 km², the UAE is about the size of Austria. In the north, the country borders the Persian Gulf for a length of about 600 km, in the east on the Ruus Al Djibal peninsula with Oman, in the south and west with Saudi Arabia.

Over two thirds of the country is occupied by the foothills of the Great Arab Desert (Ar Rub al Khali), which is mostly located in Saudi Arabia. The desert constantly threatens to expand towards the north due to traveling dunes. Large plants are used to prevent this. Between the desert and the coast there is an approximately 15 km wide salt marsh plain with salt clay pans. The coast of the Persian Gulf is preceded by numerous islands, coral reefs and sandbars, which makes the water extremely difficult to navigate.

In the northeast, the UAE shares in the Ruus Al Djibal peninsula, a headland between the Persian Gulf and the Gulf of Oman. Before its northern end (which is on the territory of Oman) is the Strait of Hormuz. The eastern part of the peninsula is occupied by the foothills of the Oman Mountains, here is the UAE’s highest peak, the Jabal Yibir at 1,527 m.

The capital Abu Dhabi is located on the coast of the Persian Gulf.

The climate in the UAE is characterized by drought and high temperatures. In the summer month of July, an average of 30 °C is measured in the capital Abu Dhabi, and air temperatures of up to 43 °C can be reached. The average temperature in January is around 18 °C. The average rainfall is around 100 mm annually, often the rain evaporates before it reaches the ground. Most precipitation falls in the winter months from December to March.

The vegetation in the UAE is extremely sparse. The desert areas are almost without vegetation, in the oases there are date palms and eucalyptus species. The original vegetation of the coastal plain had to give way to intensive agricultural use. In order to prevent the penetration of the Great Arabian Desert, large-scale plantings were carried out in the front belt of dunes.

The animal world is also poor in species. Only a few animals, such as lizards and gerbils, which are extremely well adapted to the drought, find a suitable habitat here. The abundance of fish in coastal waters has declined sharply due to water pollution.

A good 4 million people live in the UAE, with over three quarters of the population being migrant workers and not full citizens of the Federation. Most foreigners come from Egypt, Yemen, Palestine, India, Iran, Bangladesh and Pakistan. Only around 1% of the country’s area is populated, and the degree of urbanization is correspondingly high (approx. 87%). The UAE’s two largest cities are Dubai with just under 1.3 million residents and the capital Abu Dhabi with around 585,000 citizens.

Arabs make up about 87% of the population, about 5 to 10% of them live as nomads. The second largest population group are Pakistanis and Indians with around 9%. 96% of the population are followers of Islam, the majority of them Sunnis, only around 16% are Shiites. Christians and Hindus are religious minorities. Arabic is the official language, English is used as the commercial language, Persian, Indian and Urdu are also common among the minorities.

Due to the influx of migrant workers, population growth is 3.5%, only part of which is due to natural growth. The average life expectancy is 75 years. Due to the country’s richness in oil and the state support for the population based on it, the standard of living is very high. Social and health services are well developed, but do not cover the nomadic Bedouins living in the country. Citizens are entitled to free housing, electricity, water and pensions. School attendance is free, children between the ages of six and twelve are required to attend school. According to COUNTRYAAH, the literacy rate is 78%. 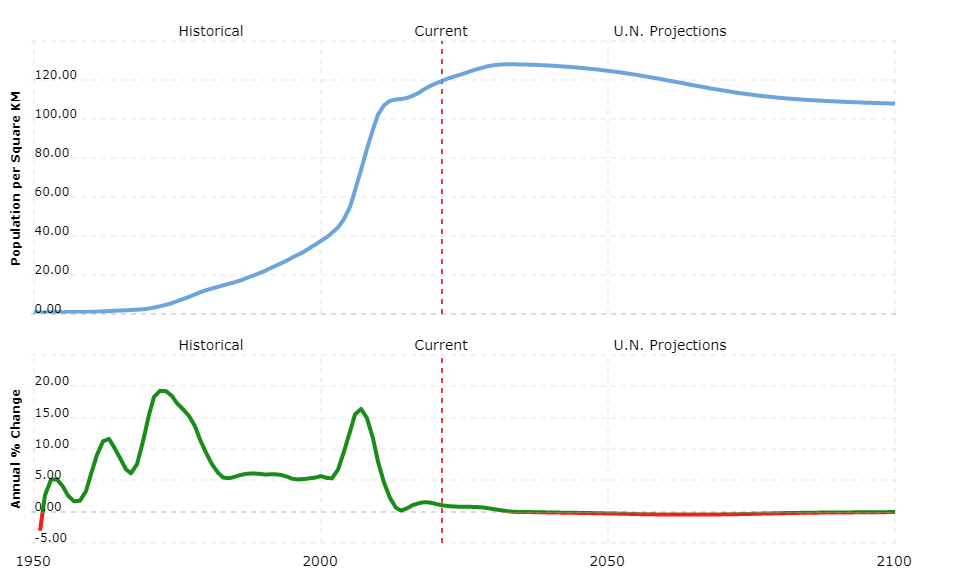 The United Arab Emirates is a federal federation of seven emirates: Abu Dhabi (Abu Zaby), Dubai (Dubayy), Sharjah (Ash Shariqah), Ajman (Ajman), Fujairah (Al Fujairah), Umm al-Quaiwan and Ras al-Khaimah. In 1971 the Federation proclaimed independence from Britain (Ras al-Khaimah joined only a year later); the actually provisional constitution dates from this year and was laid down in 1996 as the final constitution.

The head of state is the President (since November 2004 the Emir of Abu Dhabi, Sheikh Khalifa bin Zayid Al Nahayan). He is one of the seven sheikhs of the Emirates who sit on the “Supreme Council of Rulers” and elect the president from among their own ranks. The largest and richest emirates, Abu Dhabi and Dubai, have a veto right in the Supreme Council. The Emir of Dubai is traditionally Vice President and Prime Minister (Mohammed bin Rashid Al Maktoum since January 2006). The National Council (Majlis al Ittihad al Watani) has 40 members, half of which are appointed by the Emirates every two years; the second half is chosen by a cross section of the population chosen by the Emirates. There are no political parties or unions in the UAE.

The state religion is Islam. The United Arab Emirates have a dual legal system based on secular and Islamic law (Sharia law).

The United Arab Emirates have around 10% of the proven oil reserves worldwide. The oil sector (crude oil and natural gas) is the most important area of ​​the economy, the export of raw materials and the products made from them make up around 80% of the export volume. To make the economy independent of oil revenues in the long term, the UAE is pursuing a course of economic diversification. In recent years, the government has invested in job creation and improved infrastructure, and has increasingly allowed private investments.

Only just under 3% of the state area can be used for agriculture. Fruit and vegetables are mainly grown. Livestock farming and fishing contribute to meeting the food needs of the population. The keeping of cattle is still partly carried out by nomadic Bedouins.

Industry generates 57% of GDP. The most important are petrochemical and chemical companies. In order to reduce the dependency on oil as a raw material, other areas are massively promoted by the political leadership, for example metal production and processing. Aviation is also of great importance, as it accounts for almost a fifth of economic output in the UAE.

The main export partners are located in Asia (Japan, South Korea and Thailand). The United States, China, India and Japan are the main suppliers of goods (machinery, vehicles, chemicals, food).

The UAE has a very well developed road network between the major cities. There is no railway network, but the first railway lines are under construction. The country has eight international airports. Significant ports are Port Rashid and Jabal Ali.