Ukraine is the second largest country in Europe with an area of ​​603,700 km².Its territory is about twice the size of Poland. Ukraine has six neighboring countries: Romania in the southwest, Hungary and Slovakia in the west, Poland in the northwest, Belarus in the north and Russia in the north and east. The south coast with its Crimean peninsula lies on the Black Sea.

The climate in Ukraine is temperate continental with cold winters and warm summers. The southern coast of the Crimean peninsula, on the other hand, has a Mediterranean climate. Rainfalls are highest in the north and west and decrease to the east and southeast. Average temperatures in the north of the country in Kiev on the Dnieper river are -7 °C in January and 20 °C in July. The average annual rainfall is 685 mm, in the forest Carpathians they can increase to 1,600 mm. The sometimes very cold winters are less extreme on the Black Sea coast. Summer temperatures also rise to the south and reach 23 °C in Crimea in July.

Large parts of the original vegetation, mixed forest, forest and dry steppe have been converted into cultivated and arable land. Remnants of mixed forests and swamps can be found in the northern parts of the country. The region of the Carpathians in the southeast and the Crimean Mountains are still largely covered with forests. The Mediterranean vegetation on the south side of the Crimean peninsula represents a special case. Here you will find a variety of shrubs, field flowers, grasses and deciduous trees.

More than 100 species of mammals, 350 species of birds and 200 species of fish live in Ukraine. Predators such as martens, foxes, bears, lynxes and wolves can be found, and hoofed animals such as deer, pigs, elk and wild sheep can still be found in the Ukrainian forests and steppes. In addition to predators and ungulates, rodents such as ground squirrels, field mice and hamsters as well as raccoons, beavers and muskrats exist. Among the bird species, owls, gulls, black grouse and capercaillie and several types of eagle are particularly noteworthy, migratory birds such as storks, ducks and geese are temporarily in Ukraine. The numerous fish species in the inland and marine waters include carp, pike and sturgeon.

Around 47.62 million people live in Ukraine. The largest city is Kiev, the country’s capital, with approximately 2.61 million residents. Other cities with over a million residents are Kharkiv with 1.47 million, Dnepropetrovsk with 1.07 million, Donetsk with 1.02 million and Odessa on the Black Sea with 1.04 million citizens. The population declined in almost all cities, as the overall population development in Ukraine is negative (-0.7%). This is mainly due to the low birth rate, but also due to the emigration, especially of the Russian population.

The Ukrainians make up the majority of the population at 76%, followed by 17% of the Russian population. Other small ethnic groups are the Belarusians, Jews, Moldovans and Tatars. The German minority living in the country is estimated at around 33,000 people. Emigration to Germany has greatly reduced the number, so that there are only villages in Transcarpathia near Mukachevo as well as around Odessa and Nikolayev with larger German populations.

The official language is Ukrainian, which belongs to the group of East Slavic languages. It is spoken by an estimated 38 million Ukrainians in the country and approximately 4.3 million within the CIS, as well as Poland, Slovakia and Romania. There are also larger language groups overseas, such as about 1 million in the United States and 700,000 in Canada who speak Ukrainian. Russian is officially recognized alongside Ukrainian in closed Russian settlement areas. The dominant religious creed is Orthodox Christianity, to which 84% of citizens profess.

According to COUNTRYAAH, life expectancy in Ukraine is 67 years, literacy is almost extensive. 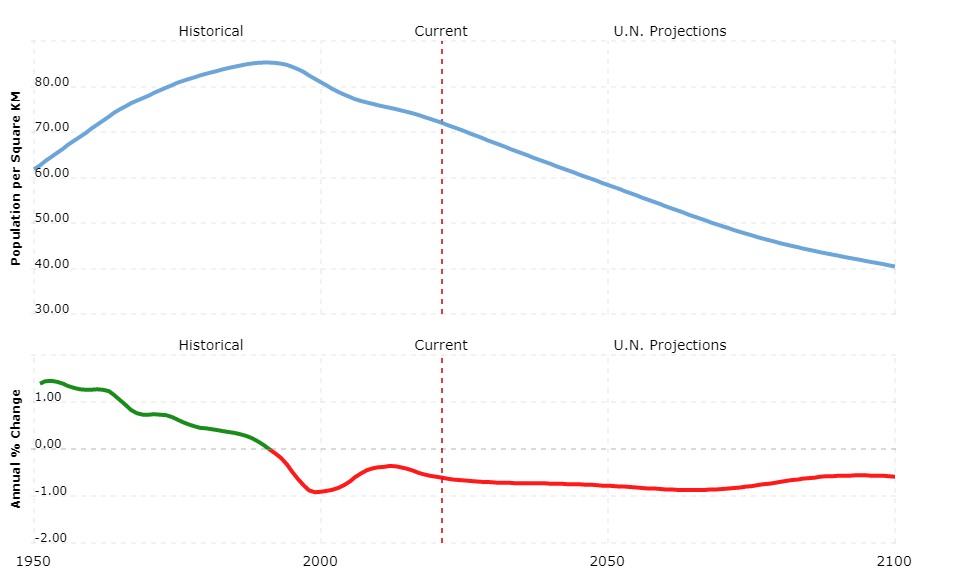 According to the 1996 constitution, Ukraine is a republic with a presidential system. The head of state (Petro Poroshenko since June 2014) is directly elected by the people for five years. The Prime Minister heads the government (Arseniy Yatsenyuk since February 2014).

The legislature lies with the Supreme Council (Verkhovna Rada) with 450 deputies who are elected for four years.

The country has 24 districts. Their governors are appointed and dismissed by the president. There is also the Autonomous Republic of Crimea with its own parliament and government, and the cities of Kiev and Sevastopol, which have special status.

The crisis that the Ukrainian economy had been experiencing as part of the transformation of the market economy was successfully managed with the help of the government’s ambitious reform program.

The main economic sectors in the country are services (two thirds of the gross domestic product, GDP) as well as the basic and heavy industry with coal mining, metallurgy and steel industry. Even in the areas of aircraft construction and rocket technology, larger plants still exist from the Soviet era, but these are outdated. Rich raw material deposits and fertile soils are a good basis for the future. However, the high pollutant emissions of the outdated industrial plants and the still heavily polluted environment in the vicinity of the reactor due to the reactor accident in Chernobyl pose a problem.

In agriculture, maize, sunflowers, sugar beets and potatoes are mainly grown, but also other types of vegetables. The cultivation of tobacco and wine is concentrated in the region on the Black Sea coast. Huge hard coal deposits are located in the Donets Basin, rich iron ore deposits as well as oil, natural gas, uranium and lead are also important raw materials in the country. A large part of the energy is supplied by oil and natural gas from Russia. In addition, nuclear power plants still generate almost half of the energy after the Chernobyl accident.

The most important import goods are machinery, natural gas, chemical products, food and vehicles. The PR China and Germany are behind Russia as suppliers (just under a third). A quarter of Ukrainian exports go to Russia and Switzerland. The main exports are ferrous metals, food, mineral products and machinery. Ukraine has been a member of the WTO since 2008.

The most important seaports are Odessa, Ilyichovsk, Kherson, Ismail, Mariupol and Kerch. There are international airports in all major cities, the most important of which are Kiev-Boryspil, Odessa and Dnipropetrovsk.

The currency is the Ukrainian hryvnia (= 100 kopecks).