The Republic of Uganda is located in East Africa and borders Sudan in the north, Kenya in the east, Rwanda and Tanzania in the south and the Democratic Republic of the Congo in the west.In the southeast, the country has a share in Lake Victoria. With an area of ​​around 240,000 km², the country is about the size of Great Britain. See Uganda country abbreviation.

The largest part of the country is formed by a plateau (around 1,000 to 1,500 m above sea level), which slopes slightly towards the northwest. In the west, the plateau is bordered by the Central African Rift Valley. Here lies the chain of Edward, George and Albert Lakes. In the Ruwenzori Mountains, the Margherita peak is the highest elevation at 5.109 m. To the east is the Mount Elgon massif (with heights of up to approx. 4,300 m), to the south the Rwandan mountains with the Virunga volcanoes, which rise up to 4,100 m.

The most important river in Uganda is the Victoria Nile, which originates from Lake Victoria near Jinja and connects it with Lake Kyoga and Lake Albert. With an area of ​​around 68,800 km², Lake Victoria is the largest lake in Africa, in which the neighboring countries of Tanzania and Kenya also have a share. The capital Kampala (since 1962) in the south of the country is the largest city in the country with around 1.34 million residents, followed by a large distance by Gulu (140,000 residents) and Lira (113,000).

Despite the proximity of the equator, Uganda has a temperate tropical climate. The average temperatures in Entebbe in the south of the country (around 1,150 m above sea level) are around 22 °C in January, around 21 °C in July, the amount of precipitation is over 1,500 mm, in the north of the country approx.760 mm. The rainy season lasts from April to September.

The vast majority of Uganda consists of moist savannah, which is characterized by tall grass, groups of trees and so-called gallery forests (extremely species-rich and fertile strips of vegetation that lie along rivers or lakes). At lower altitudes, the wet savannah merges into dense tropical mountain forest. Here you can find giant tapestries and giant senec, which protrude up to 3 m high from the damp ground. In the center of Uganda is a branched swamp and lake area that belongs to the upper reaches of the Nile. The drier north and northeast are determined by dry savannah, partly by semi-deserts.

Uganda has over 50 different races and ethnic groups. More than half of them belong to the Bantu peoples, here the Baganda with around 18% are the numerically strongest people (besides Basoga with approx. 8%, Bagisu with approx. 7% among others). The Nilotic peoples live mainly in the north of the country (among them the Teso with approx. 9%, Karamojong and Lango). There are small groups of Europeans and Asians.

The estimated population is 27.3 million people. Uganda is relatively densely populated with around 113 residents per square kilometer, the vast majority of the population lives in scattered rural areas. However, the data on population size and composition vary greatly due to the large number of refugees, who come mainly from Sudan, but also from the Democratic Republic of the Congo and Rwanda. According to COUNTRYAAH, population growth is currently a high 3.2% and life expectancy 52 years.

The number of people infected with HIV is estimated at 6.7% (as of 2005) of the total population and continues to increase despite information campaigns. An additional threat is the repeated appearance of the deadly Ebola virus, against which there are no effective medications to date. 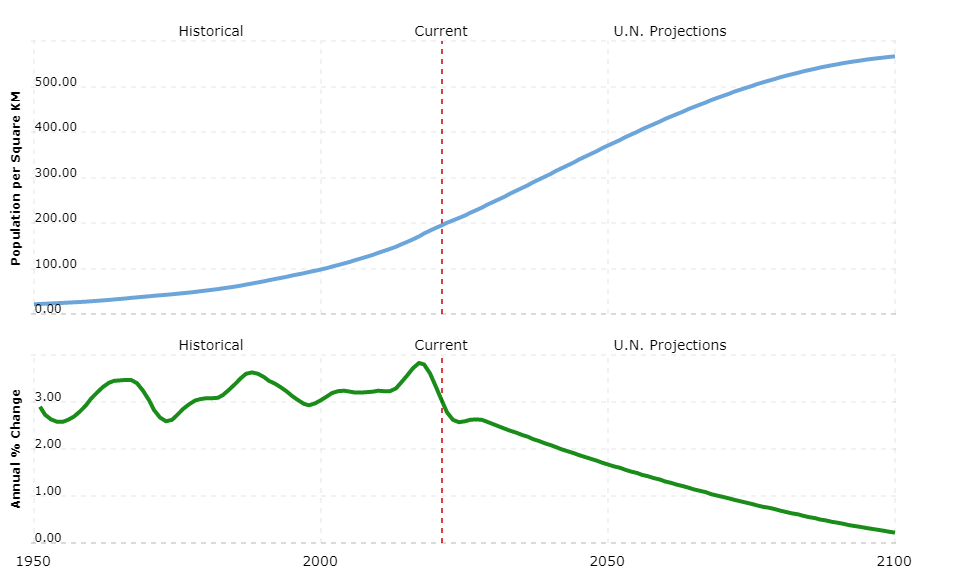 Uganda is a presidential republic, the current constitution dates from 1995. The president (Yoweri Kaguta Museveni since January 1986) is elected by the people for five years. The Prime Minister (since September 2014 Ruhakana Rugunda) only supports the President in running the cabinet.

The parliament has 375 members who are elected for five years (350 direct, 25 indirect).

Uganda is divided into four regions with 112 districts.

Uganda has seen a significant improvement in the economic situation since the early 1990s. The country has large reserves of raw materials and fertile soils. A quarter of the population still lives below the poverty line; In 1992 it was over half.

Over 80% of all workers are employed in agriculture. The main crops are coffee, tobacco, tea and cotton for export, as well as millet, cassava, bananas, sweet potatoes, sugar cane, corn and peanuts for personal use (a large part of the population operates a subsistence economy). Livestock farming (cattle, goats, poultry) also plays a role here. Forestry is important due to the export of fine woods such as mahogany.

In the Ruwenzori Mountains, copper is mined for export, and cobalt is also mined. Further deposits of mineral resources (eg large oil and gas reserves, as well as phosphates, tin, gold) are not yet being mined. The industry is poorly developed (especially near Jinja and Kampala), there are, for example, cement plants, food and textile processing companies and breweries.

It exports to Kenya, Congo, Rwanda and Switzerland. Uganda has to import industrial goods, fuels, machines and vehicles and mainly obtains them from India, China and Kenya. The country can meet almost all of its energy needs with its own hydropower plants.

Since the domestic political situation has stabilized, the tourism industry has recorded high growth rates again. The main attractions are the national parks of the country.

The currency is the Ugandan shilling.