Almost 90% of the country’s surface is occupied by the sand and debris deserts of the Turanian valley. The Karakum desert is located in the center of the country. With an area of ​​around 350,000 km² it is one of the largest deserts in the world. It rises from 80 m below sea level in the northwest to a height of up to 300 m above sea level.

In the south of the Karakum is the Kopetdag Mountains, an earthquake-intensive area that reaches heights of up to 2,942 m in Turkmen territory. In the east of the country are foothills of the Gissar Mountains, in the border area with Uzbekistan the Ayrybaba is the country’s highest elevation in the Kugitangtau chain (3 139 m). In the extreme north-west, Turkmenistan has a share in the southern foothills of the Ustyurt plateau, the majority of which lies on the territory of Kazakhstan and Uzbekistan.

The coast on the Caspian Sea is particularly structured in its northern section. The large Kara-Bogaz-Gol bay is almost dry due to the falling water level of the Caspian Sea. Due to the drift of salt and sand into the hinterland, the cultivated areas there suffer severe damage.

The longest river in Turkmenistan is the Amu-Darja, which forms part of the border with neighboring Uzbekistan. It rises in the Hindu Kush, merges with other rivers and flows into the Aral Sea after a total of 1,445 km in Uzbekistan. The 1,400 km long Karakum Canal, which runs through the desert and is used for irrigation, begins in eastern Turkmenistan on the Amu-Darja before it flows into the Caspian Sea near the city of Turkmenbaschi. By draining large amounts of water from the Amu-Darja, the Aral Sea in Uzbekistan is at risk of drying out.

The capital city of Ashkabad is located in the south of the country in the transition area between the Karakum desert and the Kopetdag Mountains.

Except for light gallery forests along the rivers, only plants that are well adapted to the great drought can be found in Turkmenistan. These include, for example, dwarf shrubs, desert grass and lichens. Large parts of the deserts are almost without vegetation. Grass steppes can be found in the mountainous regions.

In the country there are typical desert animals such as jumping mice, lizards, snakes and the desert lynx caracal. Mountain sheep, bezoars and lynxes live in the steppe areas. The cheetah is considered extinct, the Turkmen leopard and the screw horn goat are threatened with extinction.

Around 5.5 million people live in Turkmenistan. Three quarters of them belong to the Turkmen people, who are descendants of the Islamic Turkic people of the Oguses. The Turkmen tribes include, for example, the Jomudi, the Ersari and the Tekke. The proportion of Russians has dropped significantly to 4% in recent years due to emigration; Uzbek’s make up 5%. Ethnic minorities are Kazakhs, Tatars, Ukrainians, Azerbaijanis and Armenians, and around 15,000 refugees, mostly from Tajikistan, are in the country.

Islam, mostly Sunni, is the predominant religion, Christian Orthodox form a religious minority. Turkmen is the only official language, Russian and the languages ​​of the ethnic minorities are also spoken.

Turkmenistan’s average population density is 11 people per square kilometer, but large parts of the Karakum Desert are extremely thin or not populated at all. The largest metropolitan area is the capital city of Ashkabad with around 760,000 residents. Other major cities are Charjew with 232,000 and Tasauz with 210,000 residents. Overall, around 45% of Turkmenistan’s residents live in cities. According to COUNTRYAAH, the population growth is 1.4%. The medical care of the population is inadequate, the average life expectancy is 61 years, the infant mortality rate 7.3%. School attendance is compulsory, literacy is 98%. 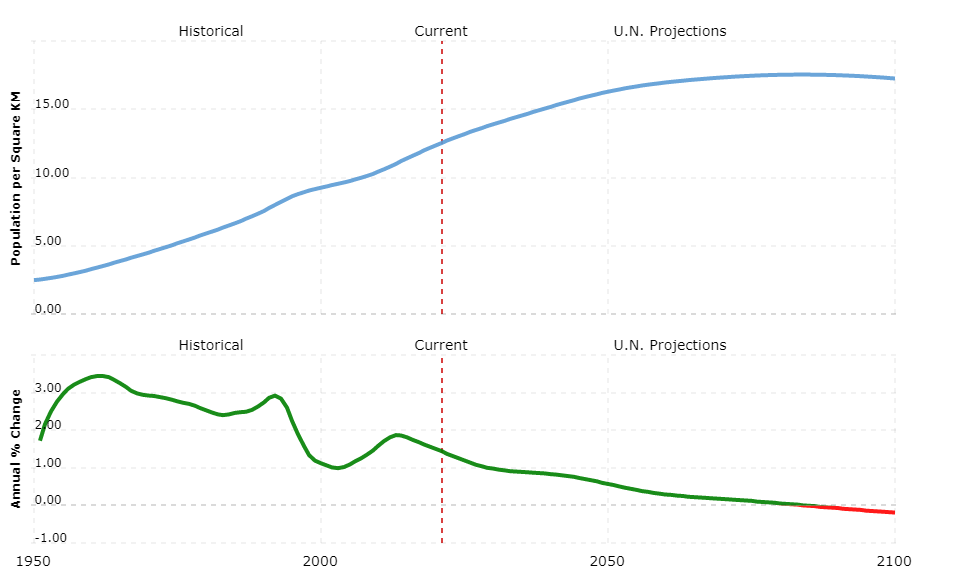 According to the 2008 constitution, Turkmenistan is a presidential republic. The head of state is the president elected for five years by the people, who is also head of the government (Gurbanguly Berdimuhammedow, since February 2007). A one-time re-election is possible.

The actual parliament (Mejlis) has 125 deputies who remain in office for five years. The People’s Council (Halk Maslahaty) has 2 507 delegates (some elected, some appointed) and is purely advisory.

Turkmenistan is divided into five provinces (Welayatlar) and one capital district.

As a Soviet republic, Turkmenistan’s economy was focused entirely on the export of natural gas, oil, and cotton. Even today, economic policy is shaped by socialist planned economic principles, but reforms are ongoing; the principle of free market economy was incorporated into the 2008 constitution. The country’s economy is stable due to the abundance of raw materials, and high growth rates are forecast for the country by opening up new markets. However, it is estimated that more than every second Turkmen is unemployed; a third of the population lives below the poverty line.

Just under 3% of the country’s area can be used for agriculture, of which 85% of the cultivated area must be artificially irrigated. Cotton is mainly grown on large plantations for export. These monocultures and extensive irrigation have led to significant environmental damage. Mulberry trees are grown as the basis for the breeding of silkworms. The cultivation of cereals, fruits and vegetables and fodder plants is intensified. The population’s food needs cannot be met. Livestock farming is of great importance: the noble Akhal Teke, thoroughbred horses, are bred for sale, the wool of the Karakul sheep provides the basis for carpets.

Turkmenistan has the fourth largest natural gas reserves in the world, mainly under the Karakum desert and on the Caspian Sea. The exact extent of the oil deposits is not yet known, but is highly valued. Energy export is the country’s most important source of foreign exchange. In addition to the oil processing industry, carpet knitting, textile and food production are traditionally important branches. The chemical industry and metal processing have become less important. Industry has a 54% share of the gross domestic product.

The road network covers a total of around 24,000 km, of which around 20,000 are paved. Around 2,400 km are available on rails. Navigation is possible on the Amudjara and the Karakum Canal. The most important port on the Caspian Sea is Turkmenbaschi. There is an international airport in the capital city of Ashkabad.

The currency is the Turkmenistan manat (= 100 tenge; firmly linked to the US dollar).