Ships passing through the canal

Khlong Saen Saeb is a canal whose name can be seen in several different versions, and this is one of the only canals on which long boats still pass. As late as the 1960s, Bangkok had many trafficked canals, but they were filled and replaced by highways.

Today, the best way to travel along the canal in a long boat is between Banglamphu and Pratunam, and it is precisely the stretch between the white Mahakan fort (Phanfa Bridge Pier / Phanfa Leelard Pier) and the Pratunam junction (Pratu Nam Pier) that has nice to go on a long boat. The financier rounds the boat, and the trip costs a little 9 or 11 baht, depending on the financier, but 11 baht is the price you should pay if you travel the entire trip. 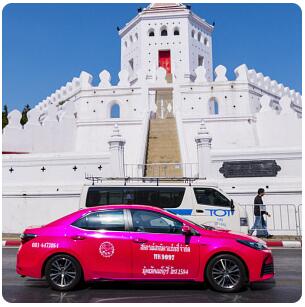 It is possible to continue on a different boat from the Pratunam junction onwards but there is a long distance to Asok Pier which is next to Phetchaburi Metro Station (but not close to Asok BTS Station) for example. When going in either direction, the boat must always be changed at Pratunam Pier.

The journey between Pratunam and Leelard takes about a quarter, and boats pass frequently. This is the best way to move between the two areas, and of the piers in between, the Sapan Hua Chang Pier is also convenient . It is close to Jim Thompson House, Ratchathewi BTS Station and Siam Square.

By no means should river boats be used if you have luggage with you. A small bag may be included but the boats are binoculars and they almost always come quite full. Care should be taken to ensure that water does not come overboard, at least so that it is swallowed. You should also be especially careful when getting on and off the boat, and you should not go into the canal boats with good footwear. For example, flip flops and high heels are not good for those who want to travel by canal boat. For many reasons, canal boats are also difficult for families, and they should not be used by a group of more than 3-4 people. 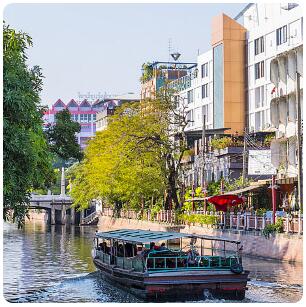 The most comfortable rides to travel, for example, between the Chinese district (Chinatown), Wat Arun, the palace area and Banglamphu are the river boats, i.e. the Chao Phraya Express Boat . Also for them, the ticket costs different amounts depending on how long you travel. The ticket is purchased in cash and for a small amount of money before the trip, and it is a good idea to hold the ticket first in your hand and then in an easily accessible place, as you may want to view it a couple of times. It is a good idea to sit on the ships as soon as possible, and if you are traveling between only one berth, you should stay relatively close to the point of entry but not block it from those who are still on board.

Traveling by river boat is also cheap, and most trips cost between 20 and 30 baht.

There are many taxis in Bangkok that can be taken from the Taxi service or stopped on the street. The downside to taxi services is that it is a large, tourism-related business, and the trips are flat-rate, making them sensitive to two or three times what the trip would actually cost.

If you stop a taxi on the street or ask for a ride from a taxi that is at a stop, the most important thing is to first tell the road you are going to, and if the driver agrees to go there, make sure the driver puts the meter on. Drivers don’t like to go around some, but they’re usually slums that tourists aren’t going to. The most likely reason a driver doesn’t want to go somewhere is that it’s too short a trip there or that the driver’s turn is about to end and the destination is in the wrong direction.

You should never accept a fixed price, but always ask to turn on the meter. By law, the meter should be on, but especially in areas favored by tourists, many drivers refuse to turn it on and offer a fixed price, usually 100 or 200 baht. However, the trip will ultimately be cheaper, as the initial fee, which includes the first kilometer, is 35 baht. After that, the meter enters 2 baht at a time rather slowly, and for example, a six-kilometer trip, which takes about a quarter in relatively congested conditions, costs 60 to 70 baht. Taxis do not take any of your luggage, but there is an additional charge of 50 baht at airports.

There are a few different taxi companies, and of these, Pink taxis are the best. The company’s drivers prefer to put the meter on, but the drivers of the yellow-green taxis are usually more reluctant to put it on. A trip with some companies may cost a little more, even if the meter is on. 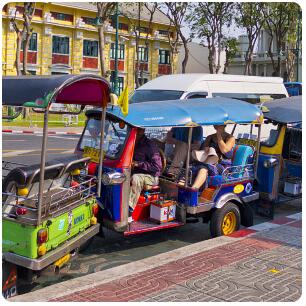 Especially in areas favored by tourists, you can see tuk-tams whose drivers try to fish tourists for their customers. A particularly large number of tuk-aids can be seen around Khao San Road and the so-called In the “palace area” with museums, temples and the Royal Palace. In Bangkok, however, tuk-subsidies are only for tourists and are only used by locals in certain situations. These include moving goods or very short journeys that cost less than the taxi start fee (35 baht).

Tuk-tuk drivers offer prices as high as 200 baht, which is the astronomical sum for moving from one place to another in Bangkok, and the same distance can be reached by taxi for 50 to 70 baht. Among other things, what goes on tuk-tuk is all the way in the middle of the pollution clouds and the chance that things will go really bad in the event of an accident is very high.

Around Khao San Road, you can see tuk-tuk drivers with signs in their hands. They read the names of 20 and several of the most famous attractions. If you imagine getting a round at all of these destinations at 20 baht, you think completely wrong. These rides are worth avoiding as they take you to jewel and other shops, not attractions, and the whole tour is only promised a big mess.

In Bangkok, you may occasionally see foreign people riding a bike, but visiting there is not even worth considering cycling. Guided cycling tours can also be seen there, but participation in such is also not recommended. You can be careful when walking in Bangkok, there is left-hand traffic and there is no consideration for cyclists. If you want to bike in Thailand, it is possible and sometimes comfortable on the islands and some beach resorts if the constant humid heat doesn’t bother you.

Even less than cycling in Bangkok can recommend scooter riding or motoring. Traffic is chaotic, various connections are completely incomprehensible, congestion occurs almost around the clock and traffic rules are flexible in a way that suits the situation. Therefore, it is a good idea to skip driving or riding a scooter, and if you want to ride yourself, you should do it at Thai resorts where a scooter can be comfortable to ride.