In Bangkok you can walk in certain areas and there you can walk a lot if you want. However, moving from one area to another is difficult and often time consuming, and there is not much to see in Bangkok in one day. The best ways to travel longer distances are the subway, overground trains, ships on both the river and canals, and a taxi, which in some places and at some times can easily get stuck in traffic jams for long periods of time.

If you want to see more than a couple of three areas in Bangkok, you should simply spend many days or a week there. Getting around from some places is easy with the public, but many areas are not very directly connected to other areas. 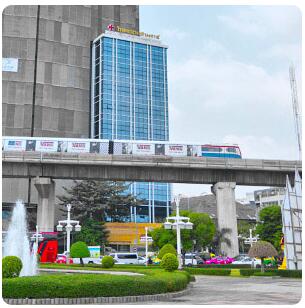 Travelers to Bangkok should be prepared to walk a lot and that there will probably be more than 30 degrees during the day, the sun will reindeer extremely hot and that a variety of hazards will suffice. Good shoes that are suitable for warm and hot climates are good to have, as is a hat, as the sun shines hot. Some of Bangkok’s streets are congested and polluted and should be avoided. However, such roads always have to be traversed from time to time and are encountered everywhere in Bangkok.

Particularly good places to walk are Banglamphu, in the area of ​​which Khao San Road is located , the adjacent old parts with major attractions such as the Royal Palace , the riverbanks in the areas of these two parts, although not uniform, the Chinese district (Chinatown) and Pratunam with its surrounding areas, where there are large shopping malls. There are some areas that are moderately comfortable to walk elsewhere, such as the areas between Chinatown and Banglamph, which have, for example, (Great Swing). In addition, all of these areas have Buddhist temple areas (wat) that are always nice to walk around, and also parks, which are admittedly rather unfortunate but quiet and relatively unpolluted places in Bangkok. For those who have just moved to Bangkok from Finland, the air-conditioned shopping malls are especially good places for a walk, but they are usually multi-storey and you don’t have to walk much after all.

All in all, it’s not worth trying to walk unnecessarily from one place to another in Bangkok, but it’s worth focusing on certain areas and moving between them by public transportation or taxi.

In many forms of public transport, the price of a trip is determined by how many stops there are. This is not usually the case when traveling by bus, but it is only worth getting on the buses in a special case. The means of transport are not in themselves interconnected in order to receive the same tickets, but a separate ticket or token must always be purchased for each means of transport. You can buy a ticket or ticket for the metro and trains both from vending machines or at the box office in cash, but at the airport Rail Link, for example, you can buy a ticket from the vending machine with a card.

Some modes of transport, such as the metro, have discounts of 90 to 120 cents for long ones, and those shorter can travel for free. People over the age of 65 also receive a discount on tickets, but all discounted tickets must be picked up at the ticket counter and not at vending machines. 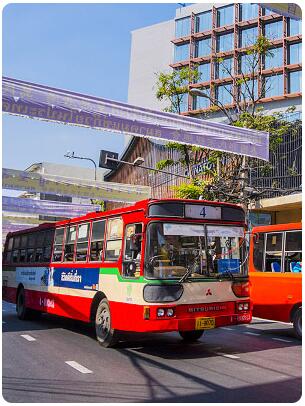 Often, the first means of public transportation a traveler to Bangkok becomes familiar with is Airport Rail Link . It runs between Suvarnabhumi Airport and Phaya Thai stop, and the trip costs different amounts depending on how many stops you travel. The whole trip costs 45 baht and the trip takes about three quarters. You can get a seat on the train if you go to it at the first stop, but in other cases, other than early in the morning or late in the evening, you can only dream of a seat.

Like many other means of transport, instead of a ticket, you get a token, which is first shown to the reader when you enter from the gate, and which at the end of the journey is slid into the gate to open. The token should not be discarded or lost under any circumstances, and it is also important to choose the correct position when purchasing the token.

The train can and should be used in some cases for travel other than between the airport and the rest of the city. It is especially convenient for those staying near Makkasan station, and this station is also accessible by metro (station: Phetchaburi).

If you travel to Phaya Thailand via Airport Rail Link, you can also continue from there by the above-ground BTS train, which is Bangkok’s air train. From the upper air you can see some views but not very much, and even on this train the seats are behind the rock. The trip costs different amounts depending on how many stops you travel, and if you buy a ticket at the box office, all you have to do is say the name of the stop you want.

The BTS Skytrain is a particularly convenient vehicle for those staying in Sukhumvit, especially along or near its main street. It is also convenient for many others, and its route is always worth exploring, as well as where you can change to the metro from it.

A card is purchased for the skytrain from the vending machine or at the cash register, which is shown to the reader at the gate upon entry and which is then entered at the gate from which you leave the pier at the end of the journey. It’s not to be missed by any means, and when you buy it, you should either enter the vending machine or say at the ticket counter the right station you’re going to. 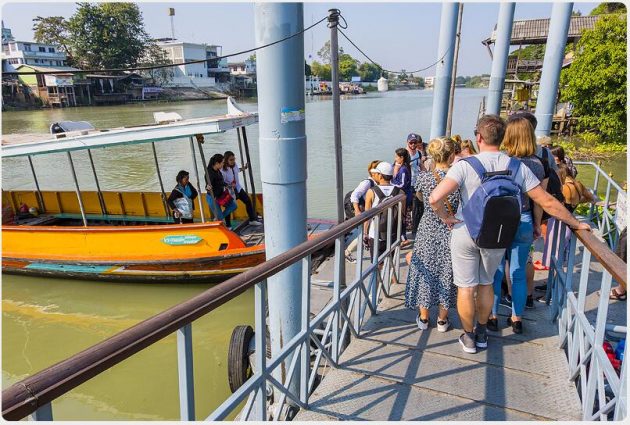 The Skytrain route map can be viewed on the website. Skytrain is commonly known on all signs and maps by the abbreviation BTS.

One of the most comfortable ways to travel fast even on long distances is Bangkok’s ever-expanding subway (MRT). The first section of the metro opened in 2004, and today the metro has two lines (blue and pink). It can now also travel across the river with Bangkok Noi, and such travel is much faster and cheaper than a taxi ride. The most convenient subway is for those who want to travel between Siam Square, Hua Lamphong Railway Station, Chinatown and the “Great Swing” near Banglamphua (station: Sam Yot). Some parts of Sukhumvit are also well connected by metro to the rest of the city, and major attractions such as the Royal Palace now have a metro station (Sanan Chai).

The token for the subway is purchased as for other trains, i.e. either from the vending machine or from the counter in cash. There are few vending machines that cards would go to, and it is usually good to have either coins or smooth banknotes. Tickets are more expensive than some other means of transport, but 30-50 baht can be used for long distances. The metro is air conditioned, the trains are new and the stations are clean. There are security checks at some stations, seating is difficult to get and walks at some stations can be quite long. It is possible to travel long distances quickly on the metro, but on short journeys, long corridors or many escalators can take longer than the metro journey itself.

If the accommodation is close to a subway station, or if there is otherwise a lot of use for the subway, you can download an app to your phone or tablet to view routes for both Android and Apple.

The metro map can be viewed in advance on the website and can also be found as an application. The metro is known on signs and maps by the abbreviation MRT.

There are a lot of bus lines in Bangkok, and buses can be seen everywhere. Locals prefer them as they are the only means of public transport to travel from almost anywhere to anywhere. However, the use of buses cannot be recommended to anyone, as their movements are not easy to find out and there is a risk that they will end up in a completely different place than where they are going. One of the most recommended routes is to travel from Mo Chit BTS Station to Mo Chit Bus Station (Northern Bus Terminal). Tickets are inexpensive, and many trips cover 10 to 20 baht.