The United Republic of Tanzania is located in East Africa, just south of the equator between the Indian Ocean in the east and the lakes of the Central African Rift in the west. With an area of ​​945 100 km², the country is about two and a half times the size of Germany. In addition to the mainland (Tanganyika), the state territory includes the islands of Zanzibar (1,658 km²), Pemba (just under 1,000 km²) and several small islands in the Indian Ocean.

The coastal strip is only narrow in the north and widens towards the south to the mouth of the Rufiji river before it tapers towards the south. The coast is divided by numerous bays and estuaries. The two flat coral islands of Zanzibar and Pemba are located off the northern coast.

The coastal strip is joined to the east by individual mountain ranges (Usambara Mountains up to 2,460 m, Uluguru Mountains up to approx. 2,650 m), followed by a highland that is on average 1,000 to 1,500 m above sea level and forms the core area of Tanzania. In the west and northwest, the highlands are bordered by the Central African Rift, where Lake Tanganyika forms the border with the Democratic Republic of the Congo. Also included in the trench system are the Rukwasee, which is located northeast of Lake Tanganyika, and the Malawi Lake (Njassasee), which forms the border with the neighboring country Malawi. In the north, Tanzania (like Kenya and Uganda) shares in Lake Victoria, which is in the Unyamwezi Basin.

The highest elevation in the country with 5 895 m is the Kibo summit in the Kilimanjaro massif in the northeast of the country. Kilimanjaro, Ngorongoro Crater, Mount Meru, which is over 4,500 m high and a number of other (mostly extinct) volcanoes belong to a threshold of the East African trench system that runs through the center of the country from the northeast to the southwest.

The capital, Dodoma, is centrally located inland. The seat of government in Tanzania is in Dar es Salaam, which is located on the coast of the Indian Ocean.

The climate in Tanzania is tropical and is tempered by the high altitude. Temperatures are high all year round with little fluctuation. While annual average values ​​of around 26 °C are measured on the coast and on the offshore islands, the average on the plateau is 20 °C. Most of the precipitation falls from December to May, and there are two rainy seasons in northern Tanzania near the equator (March to May and October / November). Most precipitation falls on the eastern slopes of the mountains, here up to 2,000 mm are measured annually. Around 500 to 1,000 mm fall in the coastal region of Tanzania, and between 1,000 and 1,500 mm in the highlands.The driest region in the country is in the northeast (Massaisteppe), here between 500 and 750 mm are measured annually.

Around 35% of Tanzania’s land area is forested. Rain and cloud forest grows on the rainy eastern slopes of the mountains. Light dry forests and wet savannas dominate on the plateau, thorny shrub and dry savannas and grassy meadows in the valleys. Extensive mangrove swamps can be found in the coastal area.

Tanzania’s wildlife is one of the most biodiverse in Africa. Several protected areas have been established, the best known of which are the Serengeti and Kilimanjaro National Parks, the protected area in the Ngorongoro Crater and the Selous Game Reserve in the northeast of the country, which is the largest game reserve in Africa with 55,000 km². In the protected areas, several of which have been declared World Heritage Sites, there are large populations of zebras, wildebeests, gazelles, antelopes, giraffes, elephants, rhinos, buffaloes, monkeys, lions, leopards and hyenas. Crocodiles and hippos live on the rivers.

According to COUNTRYAAH, 36.78 million people live in the United Republic of Tanzania. A third of them live in cities, the largest city in the country is Dar es Salaam with approx. 2.35 million residents, where the seat of government is located. Other major cities include Mwanza (215,000 residents), Arusha (272,000) and the capital Dodoma (180,000). The population density averages 39 residents per square kilometer.

The population is made up of around 120 different ethnic groups. The Bantu, which make up almost 95% of the population on the mainland, include the Haya, Makonde, Nyamwesi and Sukuma. Other ethnic groups include Swahili (approx. 9%) and Maasai. Asians, Europeans and Arabs form minorities in the country. On the island of Zanzibar, the population is a mixture of Arabs, African tribes and half-breeds from these two ethnic groups.

About a third of the population is committed to Islam (the share of Zanzibar is over 95%), a third are Christians. Traditional religions are widespread and are sometimes mixed with Christianity; Hindus are a religious minority. The official languages ​​in Tanzania are Swahili and English, and regional languages ​​are also used. Arabic is also spoken in Zanzibar.

The average life expectancy in Tanzania is 45 years. The high HIV infection rate of just under 6.5% is the biggest health problem in Tanzania alongside malaria. Infant mortality is 10%. Almost half of the population is under the age of 15. The population grows by an average of 2.5%. School attendance is compulsory for children between seven and 14 years of age, but the illiteracy rate is nevertheless estimated at 22%. 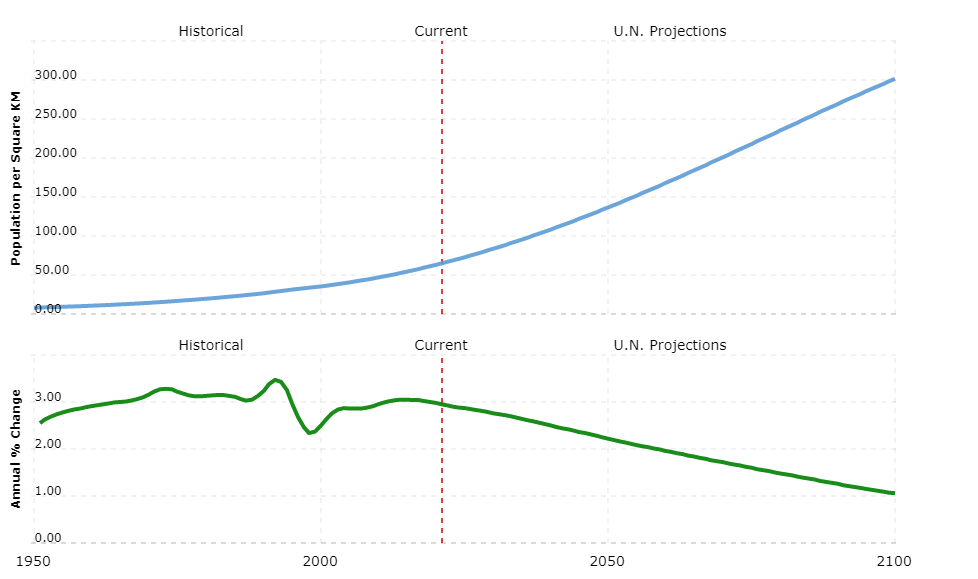 The United Republic of Tanzania has a presidential system according to the 1977 constitution: the head of state and the head of the government is the president (Jakaya Kikwete since December 2005). He is elected by the people for a term of five years (one-time re-election possible). The President appoints the Prime Minister (Mizengo Pinda, since February 2008) and the cabinet members.

The legislature lies with the parliament, which consists of one chamber, the National Assembly (Bunge). 239 of the 350 deputies are directly elected by the people for a term of five years, up to two are officially appointed, 104 seats are reserved for women, five for representatives of Zanzibar elected by the Zanzibar parliament.

Since the mid-1980s, Tanzania has largely made the transition from “African socialism” to a market economy. Despite this, and despite extensive development aid measures by the World Bank and foreign donors, Tanzania is still one of the poorest countries in the world. 28% of the population live below the poverty line.

27% of the gross domestic product (GDP) is generated in agriculture, over 70% of the population work here. Only 4% of the state area can be used for agriculture. Above all, coffee, sisal, cotton, tea, tobacco, corn, wheat, cashew nuts, sweet potatoes, vegetables and fruit are grown. Spices come mainly from the islands of Zanzibar and Pemba (for example, a large part of the cloves sold worldwide is produced here). Livestock farming does not play a significant role. The income from fishing (Lake Victoria) is used to meet our own needs and is exported. Tanzania has large forests, around 90% of the felled wood is used for energy generation (firewood), precious woods such as mahogany and rosewood are also exported.

Tanzania’s industry is moderately developed and focuses on the processing of agricultural products. There are also wood processing companies, cement plants and oil refineries. Textiles and shoes are manufactured on a small scale. Tanzania has deposits of gold, diamonds, coal, iron ore, tin, rock salt and phosphates. Around 75% of the country’s energy requirements are met by hydropower plants.

Tourism plays an important role as a source of foreign exchange income for Tanzania. The main attractions here are the national parks, especially in the Serengeti.

The transport network comprises around 3,700 km of rail, of which the railway line between Dar es Salaam and Zambia (Tanzam), built in the 1970s with Chinese help, is around 1,860 km long. There are around 88,000 km of roads available, only around 3,800 km of which are paved. Significant ports are Dar es Salaam, Tanga and Lindi. The country has four airports with international connections.

Tanzanian currency is the Tanzanian shilling.