The Republic of Slovenia (officially: Republika Slovenija) is located in southern Central Europe on the Balkan Peninsula. It covers an area of ​​20 152 km2 and was one of the member states of the multi-ethnic state of Yugoslavia until 1991. The country borders Austria in the north and Hungary in the northeast.The southern and southeastern border runs to Croatia. Italy and the Adriatic Sea are located in western Slovenia ; the country’s coastal strip on the Gulf of Trieste is about 30 km long.

The landscape consists mainly of mountains and hilly countries and only merges into a narrow lowland area near the coast. In the north the foothills of the Alps reach into Slovenia (Julian Alps, Karawanken, Steineralpen). The country’s highest peak, the Triglav at 2,863 m, is in the Julian Alps. Towards the south, the mountain range merges with the plateau of the Dinaric Mountains, the Karst (from which the geographical term Karst is derived): It is a dry and rocky landscape predominantly made up of limestone surfaces that are interspersed with branched cave systems in which often find stalactites and stalagmites. The most famous cave is the stalactite cave in Postojna (Adelsberger Grotte). If a cave roof collapses, a so-called sinkhole is created.Some of the caves in Slovenia have been declared a World Heritage Site by UNESCO (eg

Large parts of Slovenia consist of fertile, densely forested hilly land, which is crossed by numerous rivers. The Sava rises in the Julian Alps. In the east the Drau flows through the hilly and also heavily forested landscape along the Slovenian part of the Pannonian Basin.

The capital Ljubljana with about 270,000 residents is the political, economic and cultural center of the country.

While the climate in the far west of the country is Mediterranean, most of the country is characterized by a humid and moderately cool climate. Winters are severe in the mountains, summers are very rainy. The highlands in the east have warm to hot summers and cold winters. Average temperatures in the capital of Slovenia, Ljubljana (300 m above sea level), are -1.5 °C in January and around 21 °C in July. The annual amount of precipitation in Ljubljana is about 1 200 mm. Up to 3,000 mm can be reached on the slopes of the mountains.

Slovenia is about half covered with forest. In the high elevations of the mountains, these are mostly conifers such as spruce and fir, in the lower elevations there is mainly beech. Scots of pine and oak grow in the dry karst. Dense oak forests grow in the Pannonian Basin in the east of the country, while maquis grows mainly in the west, and sometimes palm trees also grow on the coast.

The large forest areas of Slovenia offer a suitable habitat for many animal species. The naturalized lynx is one of the larger mammals, and ibexes, chamois and mouflon sheep live in the mountains. The golden eagle, which has become rare in the rest of Europe, can also be found here. Different types of snakes and lizards feel at home in the karst landscape. A specialty is the Grottenolm native to the Slovenian caves.

According to COUNTRYAAH, Slovenia has just over 2 million residents. The vast majority of them are Slovenians (84%) who belong to the Slavic ethnic group. Minorities form Croats and Serbs with 2% each; Small groups of Bosnians, Hungarians and Italians also live in the country. With a national area of ​​20 152 km², the population density is around 100 residents per square kilometer. Almost half of Slovenia’s residents live in cities. The largest city is Ljubljana, followed by Maribor (approx. 95,000) and Celje (approx. 38,000).

The official language is Slovenian, which is one of the Slavic languages. Various Slovenian dialects are spoken in the country, alongside German, Serbo-Croatian and Hungarian; the Latin alphabet is used in written language. Almost 60% of the citizens belong to the Roman Catholic Church, and there are also small groups of Muslims, Serbian Orthodox and Protestants.

The population growth in Slovenia is a low 0.3%, the average life expectancy is 76 years. Due to the general compulsory schooling, almost the entire population is considered to be alphabetized. 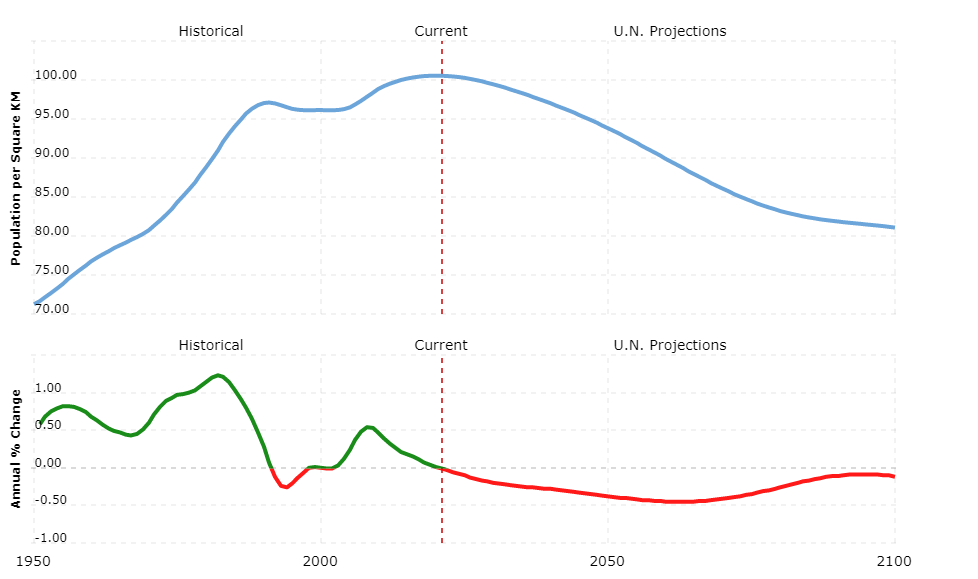 The Republic of Slovenia is a parliamentary democracy with a constitution of 1991. The executive and commander-in-chief of the armed forces is the President (since December 2012 Borut Pahor), who is directly elected for five years. The head of government (Alenka Bratušek since March 2013) is the Prime Minister, who is the representative of the strongest party or a coalition. He is elected by Parliament and proposes the members of the Council of Ministers who are then elected by Parliament.

The legislative body is a bicameral parliament; the State Assembly (Drzavni Zbor) with 90 deputies, some of whom are elected directly, some by proportional representation, every four years. The State Council (Drzavni Svet) with 40 members has primarily an advisory function; 22 of its members are elected (every five years). Every Slovenian at least 18 years of age has the right to vote; Anyone who is already working can choose from the age of 16.

Even as part of the Yugoslav Federation, Slovenia was the country that was economically most developed and prosperous compared to the other republics. Since the mid-1990s, the country has also recovered from the aftermath of the civil war in neighboring countries, which has severely impacted trade relations, not least due to the loss of tourism, which was the country’s main source of foreign currency. After independence was declared in 1991, Slovenia pursued a free market economy, which led to extensive privatization and reform. With the EU accession in 2004, Slovenia became part of the EU internal market. Slovenia was one of the wealthiest EU candidate countries and was the first of the ten new EU member states to adopt the euro on January 1, 2007.

The vast majority of foreign trade is carried out with the other countries of the European Union. Germany is the leading trading partner. The main exports are chemical products, motor vehicle and motor vehicle parts, machinery and electrical engineering. In the industry, which generates around 30% of GDP, the electronics and pharmaceuticals sectors are particularly important, as are iron and steel production as well as vehicle and mechanical engineering.

More than 40% of the country’s area is used for agriculture, mainly as pasture for cattle breeding and dairy farming. Horse breeding in the Lipica stud is known far beyond the borders of Slovenia. The main crops are potatoes, cereals, corn, wine and fruit. The country’s mineral resources include various ores, petroleum, mercury, uranium and lignite. The country’s energy needs are met by thermal and hydroelectric power plants and by a nuclear power plant operated jointly with Croatia. Tourism is an important source of foreign exchange income.

The country’s infrastructure is well developed with around 38,000 km of road and 1,200 km of rail networks. There are three international airports (Ljubljana, Maribor, Portoroz). There is a port in Koper on the Adriatic Sea.