The Republic of Sierra Leone is located on the west coast of Africa and borders Guinea in the north and east, Liberia in the southeast and south, and the Atlantic in the west. With an area of ​​71.740 km², the country is roughly the size of the Republic of Ireland. See Sierra Leone country abbreviation.

The coastal plain on the Atlantic Ocean has a width of up to 40 km and is strongly structured by funnel-like estuaries, swamps, lagoons and offshore islands. Lowlands adjoin the coastal plain, which are up to 100 km wide and are crossed by individual ridges. On the mountainous Sierra Leone peninsula, after which the republic is named and on which the country’s capital, Freetown, is located, heights of up to 880 m are reached. In the southeast the country merges into a low mountain range, in the extreme northeast the Loma Mountains reach heights of up to 1,948 m (Bintimani).

The climate in Sierra Leone is tropical, with little temperature fluctuations and a rainy season that lasts from May to October. On the coast, an average of 3,800 mm of precipitation is measured, inland up to 2,000 mm. The average temperature in Freetown on the Atlantic coast is 27 °C in January and 26 °C in July.

Mangroves grow in the coastal area, the coastal plain has extensive marshland. The interior of the country is occupied in the north by wet savannah, which merges to the south in secondary forest. Due to intensive deforestation, only remnants of the original tropical rainforests remain, only in the southeast of the country are there even larger stocks of mahogany and teak trees.

In addition to various types of monkeys (eg chimpanzees), porcupines, zebras, antelopes, hyenas, lions and leopards live in Sierra Leone. Crocodiles and hippos can be found in the rivers. There is a great diversity of species in birds and insects.

Sierra Leone has a total of around 4.96 million residents. According to COUNTRYAAH, 951,000 live in the country’s capital, Freetown. The Mandes living in the south of the country make up the largest population group with 35%, followed by the Temne (31%), Limba (9%) and Kono (6%), who mostly live in the north of the country. Smaller minorities are Asians, Europeans and Lebanese. Almost two thirds of the population are Muslims. The followers of traditional religions make up around 30%, the rest are Christians. The official language is English, Malinke, Mende, Temne, Limba and Krio (Creole) are also spoken.

Despite its rich natural resources, Sierra Leone is one of the poorest countries in Africa. Medical care for the population is poor, the average life expectancy is only 42.5 years. Accordingly, almost 50% of the population are younger than 15 years. The birth rate is high; population growth is 2.8%. There is no compulsory schooling, so that only 30% of the population (18% of women) can read and write. 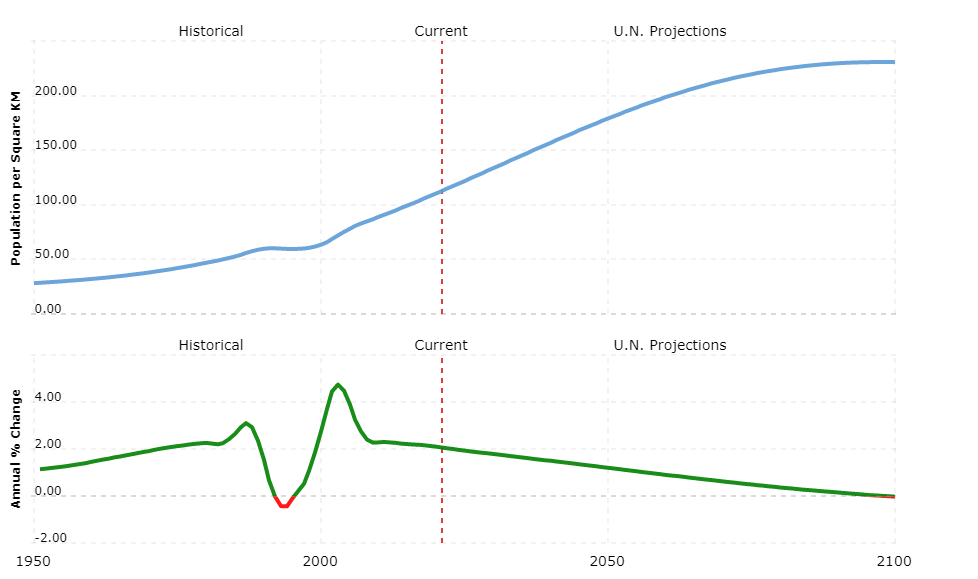 Sierra Leone is a presidential republic according to the 1991 constitution. The head of state and head of government is the President (Ernest Bai Koroma, since September 2007), who is directly elected for five years.

The legislature lies with the parliament, which consists of a chamber with 124 seats. 112 of the deputies are elected by the people every five years, twelve seats are allocated to clan chiefs.

Sierra Leone is divided into a capital district and three provinces.

After the country’s decline during the civil war, the economy has been recovering since 2002. However, Sierra Leone is still one of the poorest countries in the world with a per capita income of $ 615 a year.

The main economic sectors in Sierra Leone are agriculture and mining. 57% of the workforce is employed in agriculture, coffee, cocoa and oil fruits are exported, as well as rice, millet, cassava, peanuts, sweet potatoes and sugar cane. Livestock farming is practiced in the drier regions of the country. Fishing is very important for covering the population’s own needs.

The country has started iron ore production. In addition, the traditional mining areas of diamonds, bauxite, rutile and gold are experiencing an upswing. The industry in Sierra Leone is only weakly developed, in addition to the processing of food and the processing of mining products, mostly smaller companies produce cigarettes, textiles and furniture. China is the most important export trade partner, followed by Belgium and Japan. Imports (food, machinery, fuel) come from China, India, South Africa, the USA and Great Britain.

Around 900 km of the 11 500 km of roads are paved. Some of the rivers are navigable for a total of 600 km. The country’s most important port is Freetown, which is also home to an international airport.