The Republic of Senegal is located in the far west of Africa and, with an area of ​​196 722 km², is about half the size of Germany. The Senegal River, which marks much of the north and northeast border, gave the country its name. Senegal borders Mauritania to the north, Mali to the east, Guinea and Guinea-Bissau to the south, and the Atlantic Ocean to the west. Along the lower reaches of the Gambia River, the Republic of The Gambia extends approximately 350 km as an enclave into the state territory of Senegal. See Senegal country abbreviation.

Most of the country consists of coastal lowlands, which only gradually increase in the east towards the Guinean highlands Fouta-Djalon, whose foothills reach heights of 300 m to a maximum of 581 m in the extreme southeast of the Senegalese territory. The rivers Senegal, Saloum, Gambia and Casamance flow through the coastal plain in an east-west direction. Around 700 km of the 1 430 km long Senegal flow through the country of the same name. The main source river of Senegal originates in the highlands of Guinea and is called Bafing there.The Atlantic coast is mostly flat and not very structured, except for the Cape Verde peninsula (Cap Vert), which is made up of former volcanic islands and which forms the westernmost promontory in Africa (not to be confused with the island state of the same name, Cape Verde, whose islands are around 700 km off the coast).

Senegal has a dry (north) to rantropical (south) climate. There is a short rainy season in the north from the end of July to October, with about 300 mm of precipitation annually. The northern part of the country (Sahel region) is repeatedly affected by droughts. Up to 1,500 mm of precipitation falls in the south from April to November. Temperatures are high all year round, in the capital Dakar on the Atlantic coast average values ​​of 21 °C are measured in January and 28 °C in July. Inland temperatures are on average 3 to 4 °C higher than on the coast.

In accordance with the low rainfall, there is a dry savannah with thorn bushes and isolated groups of trees in northern Senegal. The northern part of the country is assigned to the Sahel, which is a transition zone from desert to savanna areas. To the south, the vegetation changes with increasing rainfall via tree and shrub savannah to tropical wet forests. South of the Gambia River, the landscape is characterized by large mangrove areas. The kapok tree grows here, and the baobab tree is widespread throughout the southern part of the country.

A species-rich fauna can almost only be found in the designated conservation areas (eg Niokolo-Koba National Park, Djoudj bird sanctuary). Buffalos, elephants, hippos, cheetahs, hyenas and lions live here, and warthogs in the south. The Djoudj bird sanctuary in the northwest of the country (declared a World Heritage Site by UNESCO) is home to around 180 species of birds, including red-winged pelican, great white and purple herons. Snakes such as the Boa constrictor, which reach a length of up to four meters, are common in southern Senegal.

Around 10.13 million people live in Senegal, the strongest ethnic group with around 44% are the Wolof, who mostly live in the northwest of the country. Other groups are Serer, Fulbe, Tukulor, Diola, Bambara, Malinke and Sarakole. About 94% of the country’s residents are Muslim Sunni, followers of various traditional religions and Catholics make up 56% or one percent of the population. Almost a quarter of the total population lives in the greater Dakar area, the country’s capital (2.27 million people). The next smaller towns are Thi¨¨s with around 238,000 residents in the urban area, Rufisque with 180,000 and Kaolack with 172,500 residents. The population growth is 2.5%.

The official language in Senegal is French, and Wolof and other languages ​​are also spoken (eg Serer, Diola, Malinke). According to COUNTRYAAH, life expectancy averages 57 years. Over 40% of the population are younger than 15 years. There is social security and adequate medical care for urban workers, but not for the rural population. There is general compulsory schooling for children aged six to twelve, but only just under half of the children attend primary school until the end; accordingly, the illiteracy rate is very high at 60%. There has been a university in Dakar since 1957. 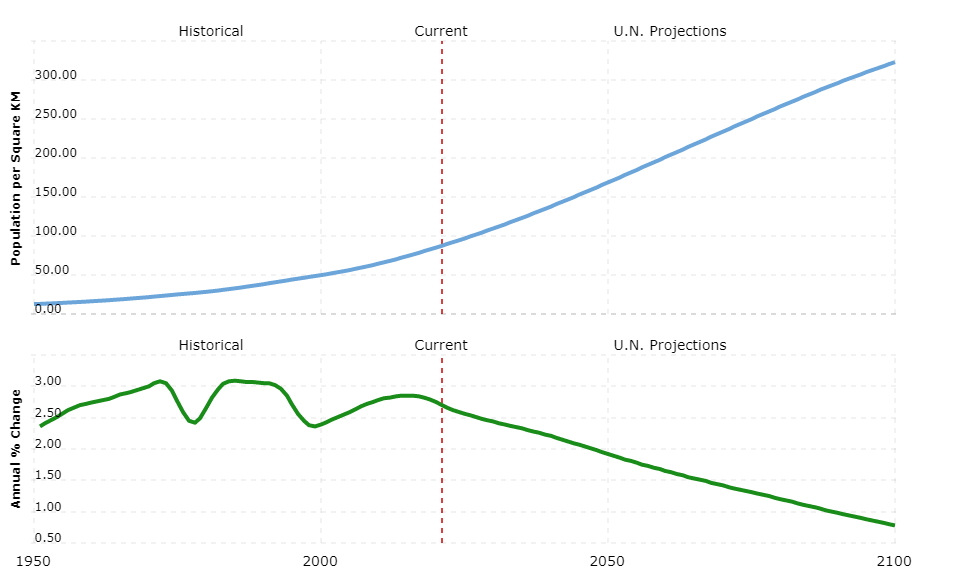 Senegal is a republic with a presidential system, the constitution dates from 2001. The head of state is the president (Macky Sall since April 2012), who is elected for five years (can be re-elected) and has extensive powers. The head of the government is the Prime Minister, who is appointed by the President (Prime Ministre, Mohamed Ben Abdallah Dionne since July 2014). He appoints the ministers in consultation with the president.

The legislature lies with the bicameral parliament, consisting of the Senate (Senate) with 100 members – 35 of them elected, 65 appointed by the President – and the National Assembly (Assembl¨¦e Nationale) with 150 deputies, directly elected by the people for five years.

Senegal is divided into 14 regions.

Senegal is a developing country, almost half of the population lives in poverty. Since the mid-1990s, the largely state-controlled economy has been increasingly liberalized and privatized.

Agriculture is employed in 77% of the total population. It forms the natural basis of life for the rapidly growing population and is mostly practiced as a pure subsistence economy. Droughts, overgrazing and soil erosion cannot feed the country’s residents. Food is one of Senegal’s most important imports. Fish, fish products and peanuts make up about a third of the export volume. For their own needs, millet, rice, cassava, potatoes, vegetables and cotton are grown in smallholder farms.

The main growth area is the service sector (especially finance, telecommunications and real estate). Tourism is an important source of foreign exchange income in Senegal.

The most important branches of industry are the textile and food processing companies, the chemical (oil processing, fertilizer production) and the building materials industry. Senegal has mineral reserves of phosphate and petroleum, but the latter has not yet been mined and phosphate mining is declining. The energy requirement is largely covered by imported petroleum.

France is still the most important trading partner in imports, followed by Nigeria and India. Most goods are currently sold to Mali, Switzerland and India.

Around 4,300 km of paved road are available in the country (around 14,500 km in total), plus around 900 km of rail. Dakar has a large sea port. The large international airport is also in the vicinity of the capital.