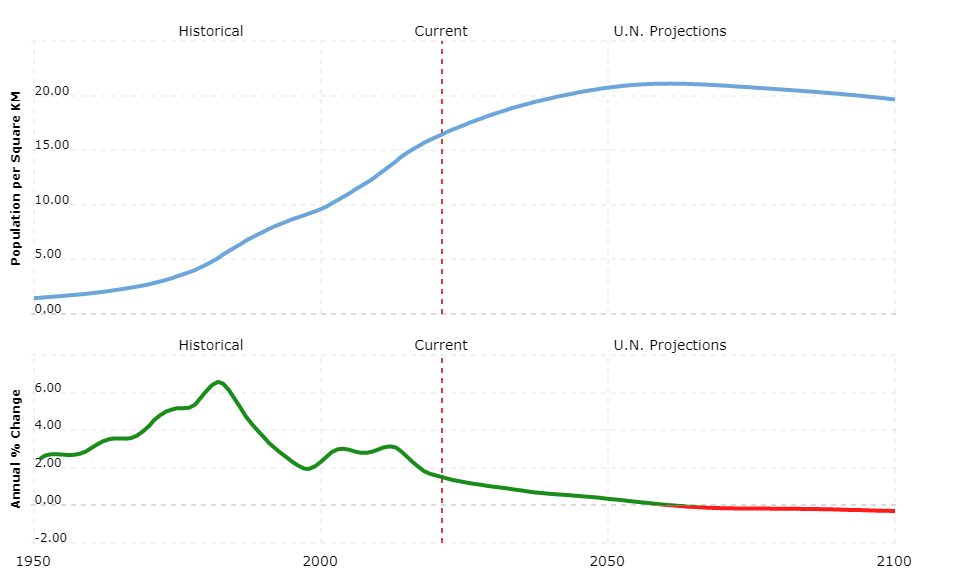 The Kingdom of Saudi Arabia occupies most of the Arabian Peninsula and borders in the north on Jordan, Iraq and Kuwait, in the east on the Persian Gulf, Qatar and the United Arab Emirates, in the south on Oman and Yemen, in the west the Red Sea. The total area of ​​2 240 000 km² (the country is about four times the size of France) includes numerous islands in the Persian Gulf and the Red Sea (eg Farasan Islands).

The majority of Saudi Arabia consists of sand and stone deserts. In the south and southeast is the Arabian Desert (Rub al Khali), which occupies a third of the country with an area of ​​around 700,000 km². To the north is the Nefud Desert (An Nafud), approximately 60,000 km² in size and consisting mainly of red sand. The Ad Dahna desert in the east of the country connects the Nefud Desert and the Arabian Desert, where the so-called Neutral Zone was located, an oil-rich area that belonged to Kuwait and Saudi Arabia until 1966 and is still exploited by both countries today. In the west of Saudi Arabia there are two large mountain systems, Hejaz (Hijaz) in the north and – afterwards – Asir, which run parallel to the Red Sea coast. In the Asir is the highest elevation in the country, the Jabal Sawda with 3 133 m. The land drops steeply towards the Red Sea to a coastal plain that is between 20 and 50 km wide. The central highlands (Nejd), which lies at around 1,000 m, are divided by deep valleys (wadis) and descend in marked steps to the east towards the Persian Gulf. The capital Riyadh (Al Riyad) is located in the center of the Arabian Peninsula.

The climate is desert-dry in the interior and hot and humid in the coastal areas. In the capital Riyadh, mean values ​​of 15 °C are measured in January and 34 °C in July. Precipitation is very low and does not exceed 100 mm on an annual average.

In Djidda (Jiddah) on the Red Sea coast, the average temperature in January is 24 °C, in July 32 °C. Here too, the amount of precipitation is low (around 100 mm), but there is still high humidity. Up to 600 mm of precipitation is sometimes measured on the western slopes of the Asir Mountains.

Large parts of the country are almost without vegetation: While there is no plant growth in the Arabian Desert and parts of the Nefud Desert, thorn and hard bushes and steppe grasses can be found in the central highlands and coastal areas. Forests exist only in the western coastal mountains (Asir), holm oaks and cedars grow here. An exception are the oases, which are mostly located in the eastern part of Saudi Arabia: In the middle of dry areas, springs extract groundwater. Many of the oases are cultivated intensively (vegetables, fruit trees, date palms).

The deserted and semi-deserts in Saudi Arabia form ideal retreat areas for many animal species that have already become extinct in other parts of the world or are very rare. Desert monitor lizards, hawks and sand cats, caracals, white oryx antelopes and Nubian ibex live here. In addition, wolves, jackals, foxes, ostriches, leopards and wild sheep live in the country. There is a diverse bird life on the coasts (including pelicans, flamingos, Socotra cormorants).

The population of Saudi Arabia comprises just under 26.42 million people, of whom over 5.5 million are of non-Saudi origin. The largest minorities come from Yemen (9.5% of the total population), Bahrain, Egypt, Jordan, Pakistan, Syria, India and Kuwait. In addition, around 100,000 Palestinian refugees live in Saudi Arabia. Islam is the state religion, 99% of the residents are Muslim Sunni (Wahabites). There are smaller groups of Hindus and Christians among the foreign workers. Islamic law, Sharia law, is the basis for the entire legal system of the state. The national language is Arabic, English is used as the commercial language.

The majority of Saudi Arabians (over 80%) live in the cities of the coastal regions or oasis towns in the center of the country, large parts of the state are not or only temporarily inhabited (nomads). The largest city is the capital Riyadh with 4.55 million residents in the urban area, followed by Djidda (3.19 million). In the west of the country are the cities of Mecca (Makkah) and Medina (Al Madinah), birthplace and tomb of the Prophet Mohammed and the two most important holy places of Islam. Non-Muslims are not allowed to enter both cities.

The standard of living is very high in urban areas, but sometimes low in rural areas. Life expectancy is a good 75 years, and population growth despite a tendency to emigrate is 2.4%. According to COUNTRYAAH, the literacy rate is given as 79%.

Saudi Arabia is a kingdom, the head of state is the king (Salman Ibn Abd al-Aziz since January 2015). The king also holds the office of head of government and is also nominally the spiritual leader. The Koran and the Shari’ah form the basis of the state and legal system. All political and military power is in the hands of the royal house, important posts such as that of the Minister of Foreign Affairs and Defense or the provincial governors are occupied by the king’s brothers or half-brothers.

The legislation is also in the hands of the royal family; the Majlis Asshura, a gathering of 150 members appointed by the king for four years, has a purely advisory role. This “Consultative Assembly”, which is mainly made up of experts, scientists and technocrats, has a say in the management of state affairs and a so-called right to ask questions.

Political parties and unions are not permitted in Saudi Arabia, there is an extensive ban on assembly, freedom of expression and the press are restricted. Public life is strictly controlled, non-Islamic religious practice is punished.

Saudi Arabia is divided into 13 regions (mintaqat), there are also two neutral zones.

Because of its huge oil reserves, which have been extracted since 1938 and exported since 1944, Saudi Arabia is one of the richest countries in the world and the largest oil producer in the world. A quarter of the world’s known reserves are located on Saudi state territory. In addition to petroleum, the country also has deposits of natural gas, gold, silver, iron and tin. The unemployment rate among the local population is officially 12%, according to unofficial estimates 30%.

With the help of the high profits from petroleum exports, an efficient economy that is largely independent of raw material exports has been built up in recent years. On the Persian Gulf (Al Jubayl) and on the Red Sea (Yanbu), for example, new industrial centers with large companies in the petrochemical and steel industries were created, and cooperation with foreign companies is also carried out here. Nevertheless, the state still generates 90% of its export earnings from oil; economic growth of 5% on average is also due to the raw material.

Agriculture also benefits from the profits of oil exports through subsidies. Around 4% of all workers are employed in this area, which generates around 2% of the gross domestic product. With the help of state-of-the-art irrigation systems, the areas under cultivation of wheat, millet, rice, vegetables and especially dates could be expanded over a large area. Saudi Arabia is the largest date exporter in the world. Cattle breeding is still predominantly practiced today by nomads or semi-nomads.

The financial services sector is also growing steadily. An important source of income for Saudi Arabia is the pilgrims who travel to the two holy cities of Islam (about 2.5 million annually). There is hardly any foreign tourism.

The country’s most important trading partners are China, the USA, Japan, South Korea and the EU countries.