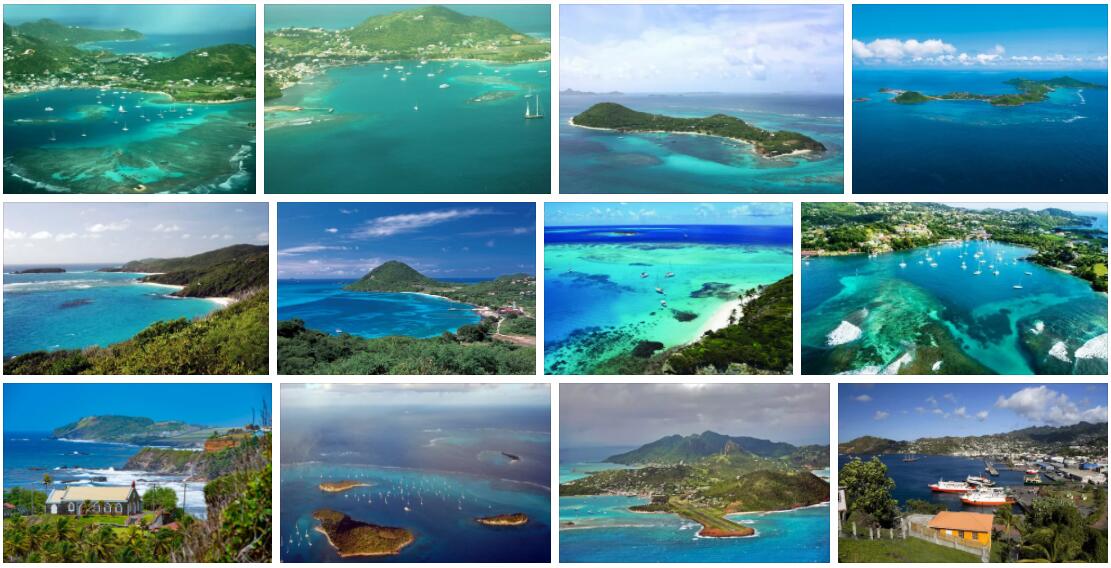 The island nation in the Caribbean (also: St. Vincent and the Grenadines; officially English: Saint Vincent and the Grenadines) belongs to the Windward Islands and is located south of St. Lucia and north of Grenada. The main island of Saint Vincent has an area of ​​344 km², the 32 islands of the Grenadines, which belong to the state (the southern ones belong to Grenada), cover a total area of ​​45 km². These include Bequia Island (18 km²), Canouan Island (7 km²), Union Island (8 km²), Mustique, Mayreau, Petit Nevis, Isle ¨¤ quatre, Pigeon Island, Battowia, Baliceaux, Petit Mustique, Savan, Petit Canouan, Tobago Cays, Palm Island and Petit St. Vincent.

The islands are of volcanic origin and have a mountainous character. On the main island of Saint Vincent, a mountain range runs through the island from north to south. The highest elevation at 1,234 m is the extinct Soufriere volcano in the north of the island, whose crater is around 1,200 m in diameter and at the bottom of which there is a crater lake (last eruption in 1979). Other mountains include Richmond Peak at 1,041 m and Mount Brisbane at 904 m. To the east, the mountains gradually drop to the sea, to the west in the form of steep cliffs on the coast. The Grenadines are also mountainous and have long sandy beaches.

The capital, Kingstown, is in the southwest of the island of Saint Vincent.

The island state of St. Vincent has a tropical climate with consistently high temperatures all year round. The annual average values ​​are around 26 °C. A large part of the precipitation falls in the months of June to December: up to 1,500 mm are measured on the coasts and in the lower areas, while on the slopes facing the wind the mountains can fall up to 3,800 mm. In the mostly flatter grenadines, the amount of precipitation is significantly lower. In the dry season (January to May) there is often a lack of fresh water. Hurricanes can occur especially in September and October.

The volcanic soils of the island state are very fertile. The mountains on the main island of Saint Vincent are covered with evergreen tropical rainforest, in which there is a large variety of plants. Most of the rainforest was cleared in the Grenadines. In the capital Kingstown is the oldest botanical garden in America, which was created in 1765 and contains, among other things, specimens of the breadfruit tree introduced in 1793.

Only the bird life and the underwater world in the waters off the coast are rich in species on the islands. The Royal Amazon, which only lives on Saint Vincent, of which an estimated 400 still exist, was named a national bird. A reserve is planned to protect the population considered to be at risk.

A total of around 117,000 people live in the island state of St. Vincent and the Grenadines, most of them on the main island. Kingstown on the west coast of Saint Vincent has about 30,000 residents. Over two thirds of the population are black and descendants of the slaves abducted by Africa. The second largest population group with approx. 20% are mulattoes (hybrids of blacks and Europeans). According to COUNTRYAAH, 6% are descendants of Indian contract workers who came to the islands after the abolition of slavery. Whites, mostly of British origin, have a population share of about 3%, almost 1% are descendants of the indigenous people (Caribbean and “Black Caribs”) and live mainly in the north of the island of Saint Vincent inland.

About three quarters of the total population are Protestants (mostly Anglicans and Methodists), almost 10% are Catholics. The official language is English, Creole English is also spoken, and occasionally Patois.

There is a significant birth surplus, but population growth is only 0.5%, as many leave the country due to the prevailing unemployment. Health care is relatively well developed on the main island of Saint Vincent, but incomplete in the Grenadines. The average life expectancy is around 70 years.

The island nation of St. Vincent and the Grenadines is, according to the 1979 constitution, a parliamentary monarchy in the British Commonwealth of Nations. The head of state is the British monarch Elizabeth II, who is represented on the islands by a governor general (since September 2002 Frederick Ballantyne). He appoints the prime minister as head of government of the country, who is usually the representative of the strongest party in parliament (Ralph Gonsalves since March 2001).

The legislature lies with the parliament, which consists of a chamber (national assembly) with 23 members. 15 MPs are elected directly by the people, six senators are proposed by the head of government and the leader of the opposition and appointed by the governor general, two are ex officio. Relevant political parties are the United Labor Party (ULP) and the New Democratic Party (NDP).

The economy of the island state is mainly based on agriculture (bananas) and tourism.

Almost half of the total land area of ​​the islands is used for agriculture; bananas (a third of exports), coconut palms and the West Indian arrowroot (as the basis of medicinal products and baby food) are cultivated for export. Banana sales are declining due to high production costs and quality problems. Tuber crops, vegetables, corn and sugar cane are cultivated for the local population’s own needs, and fishing is also important. Food must also be imported. Tropical cyclones repeatedly lead to severe crop losses.

The industry is only moderately developed and focuses on the processing of agricultural products. Cement, textiles and furniture are also produced in small businesses.

In addition to food, machines, vehicles and finished products are also introduced. The main trading partners are the USA and the other Caribbean countries.

Tourism is becoming the strongest source of foreign currency and is funded by the government.

The road network on the main island of Saint Vincent covers a total of around 1,000 km, a third of which is paved. Kingstown is the only deep-sea port in the island state. There is an international airport on the main island near the capital Kingstown.