The Republic of Rwanda is a landlocked country in eastern Central Africa and, with an area of ​​26,338 km², is about the size of Albania. In the north the country borders on Uganda, in the east on Tanzania, in the south on Burundi and in the west on the Democratic Republic of the Congo (until 1997 Zaire).

Rwanda is at an altitude of 1,500 m above sea level and is characterized by mountainous areas with partially active volcanoes. In the west of the country lies the Kiwu Lake in the Central African ditch, which lies at around 1,460 m and forms part of the border with the Democratic Republic of the Congo. To the east, the edge of the ditch rises steeply as a mountain range in which heights of up to 3,000 m are reached and which forms the watershed between the Nile and the Congo. The chain of partially active Virunga volcanoes lies in the northern area of ​​the moat, this region is considered to be one of the most earthquake-prone in the world. The Karisimbi here in northwest Rwanda is the highest point in the country at 4,507 m.

To the east is the highland of Rwanda, which descends in steps to heights of around 1,500 m. The plateau is deeply cut through numerous valleys. In the east of Rwanda there is an extensive swamp landscape with several runoff lakes. Here the river Kagera (around 1,250 m above sea level) forms the eastern border with neighboring Tanzania. Other lakes are Luhondo, Bulera and Mohazi.

The capital Kigali is located in the heavily populated highlands of Rwanda.

Rwanda has a tropical and humid climate, which is mitigated by the high altitudes. The temperatures in the lower and middle-lying areas are consistently high all year round, the values ​​average around 21 °C. Above 1,800 m the average values ​​drop to around 17 °C. Night frost can occur at higher altitudes. There are two rainy seasons (February-April and November-December), generally the rainfall decreases from the west to the east. While up to 2,000 mm are measured in the western mountain country, the average values ​​in the eastern part of Rwanda are around 800 to 1,000 mm annually.

Due to the different altitudes, the vegetation ranges from tropical rainforest in the west to dry savannah in the east. In the mountainous west there is rainforest that changes into bamboo forests from a height of approx. 2,500 m. A total of 20% of the country’s area is forested. The central highlands are covered by wet savannas. The predominant tree species are eucalyptus, acacia and oil palm. The former dry sparse forests in the east of the country have been largely cleared of grass and bushes. In the flooded area of ​​the Kagera River there is dense papyrus vegetation. Due to the dense population of Rwanda, large parts of the savannah landscapes have become cultural land.

12% of the country’s area has been declared a protected area, especially in the two national parks (Kagera and Park of the Volcanoes) there is a species-rich wildlife. In the Kagera Park (2,500 km²) there are large populations of various antelope species, waterbucks and zebras in addition to elephants. In addition to lions and leopards, black rhino also live here. In addition to crocodiles and hippos, numerous bird species can be found in the swampy floodplains. The mountain gorillas, which are threatened with extinction, live in the rainforest on the mountain slopes in western Rwanda.

A total of around 8.44 million people live in Rwanda. The degree of urbanization is very low at around 6%. By far the largest city is Kigali with around 605,000 residents. Other cities are Butare (70,000 residents), Ruhengeri (72,000) and Gitarama (85,000). However, due to the uncontrolled influx of rural people and the high number of refugees, the numbers are only estimates. The average population density in Rwanda is the highest on the African continent at 343 people per square kilometer.

According to COUNTRYAAH, 85% of the population of Rwanda belong to the Hutu Bantu people, the Tutsi (also: Watussi, Hima) have a share of about 14% of the population. The descendants of the presumable Rwandan indigenous people, the Pygmy Twa, make up around one percent of the population. Official languages ​​are the Bantu language Kinyarwanda (Rwanda, also spoken by the Tutsi) and French. English (third official language since 1996) is becoming increasingly important as a traffic and administrative language. An estimated 60% of Rwandans are followers of the Catholic faith, while Protestants account for around 25%. About 7% are Muslims, and traditional religions are also practiced – sometimes parallel to Christianity.

Medical care for the population is poor. The rate of people infected with the immune deficiency disease AIDS is a high 5.1% and continues to rise. The average life expectancy is 47 years and infant mortality is 9.1%. At 2.4%, the population growth is very high again after a phase of slowdown.

School attendance is compulsory for children between the ages of seven and 15, attending school is free of charge. Around 71% of Rwandans can read and write. 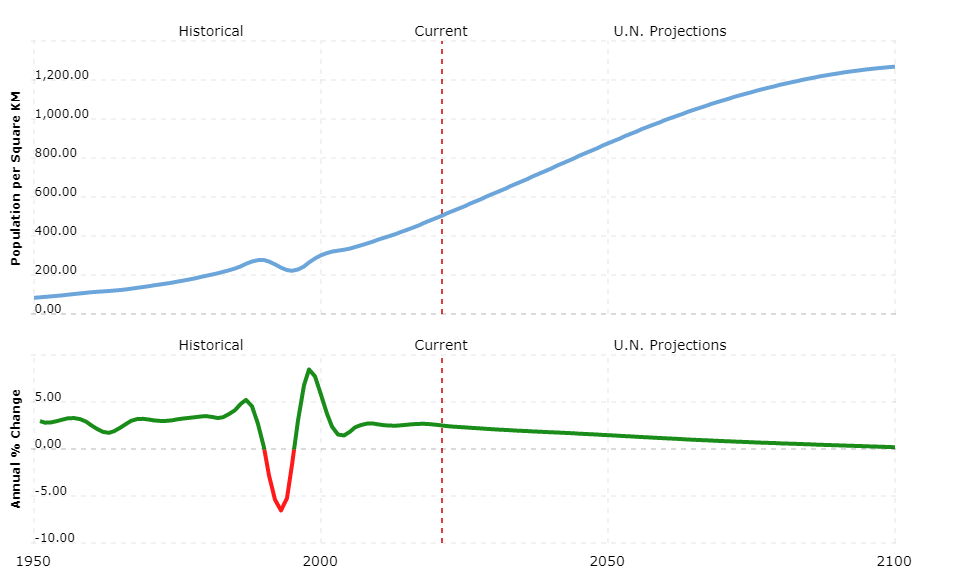 Rwanda has a presidential multi-party system; the constitution dates from 2003. The head of state is the president, who has been directly elected by the people for seven years (since April 2000 Paul Kagame). The government is led by the Prime Minister (Pierre Habumuremyi since October 2011), whose cabinet is appointed by the President.

The legislature lies with the Senate and the Chamber of Deputies (80 members, for five years; fixed quotas for the representation of women, youth and people with disabilities). The 26 senators are elected partly indirectly by the people, partly by the president and a party assembly for eight years.

The case law is based on Belgian law and African tribal rights.

Rwanda is divided into five provinces.

Rwanda wants to achieve the status of “middle-income country” by 2020. The proportion of the population living below the poverty line has been reduced in recent years, but is still at 45%. This makes Rwanda one of the poorest countries in the world. The challenges are shortages in the power supply and in trained specialists, high population growth, scarcity of land and the effects of climate change.

Agriculture contributes a third of the gross domestic product (GDP). 90% of the population live largely from subsistence farming. Despite extensive agricultural land, the population’s own food requirements cannot be met. Coffee and tea are mainly grown for export, and bananas, beans, corn, millet and sweet potatoes are also cultivated. Dried chrysanthemum flowers provide the base material for the insecticide pyrethrum. Livestock farming is only used to cover their own needs. After the uncontrolled deforestation of large areas, reforestation has been carried out since the mid-1990s.

The service sector (financial services, information technology, insurance, tourism) has now overtaken agriculture with more than half of GDP.

Rwanda has a poorly developed industry. The existing companies concentrate on the greater area around the capital Kigali and mainly process agricultural products. Shoes, textiles, soap, cement, furniture and cigarettes are also produced on a small scale. Copper, tin stone, tungsten, beryllium and gold are mined from mineral resources. Methane gas is produced in Lake Kiwu. Part of the country’s energy needs are imported from firewood, and oil and methane gas are imported.

Coffee is Rwanda’s most important export, followed by tea and copper. About two thirds of the exports go to the countries of the East African Community EAC, about a quarter to other African countries and 14% to Europe. The main imports are food, machinery and accessories, steel and fuels from Kenya, Germany and Belgium.

The main road network in Rwanda is quite well developed. Almost 1,000 km of a total of around 12,000 km of roads are paved. There is no rail network or navigable rivers. The capital Kigali is served by international airlines.

The currency is the Rwandan franc.